Home WMNF News Human Rights Activists at Port Tampa Bay rally, but are unable to stop an Israeli ship from unloading its cargo 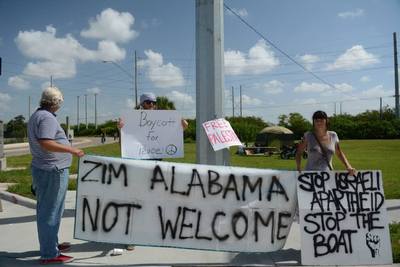 Protesters greeted a ship from an Israeli company on Saturday.

They join others at ports around the country drawing attention to the Israeli occupation of Palestine.

The dozen or so activists were not able to stop the ship from unloading its cargo, but raised awareness of the campaign to protest the Israeli shipping company.

About 40 non violent peace activists braved the intense noon day August sun to protest the unloading of the Israeli cargo ship Zim Alabama. They set up along the busy 22nd street causeway at the entrance to the Port Tampa Bay terminals.

The protesters waved homemade signs and shouted slogans to passing motorists. Some cars and cargo truck drivers honked their horns in encouragement as they slowed to read the signs and wave to the protesters.

Activist Avi shared the goals of the Block The Boat movement:

USF Students For Justice in Palestine leader Rama took to the bull horn to encourage the protesters to carry on the fight to boycott Israel over the harassment, discrimination and murder of Palestinians. Like some of the other activists she chose to not give her last name. She encouraged the assembled to join the BDS movement to Boycott, Divest from and Sanction Israel as the world did to successfully upend apartheid South Africa.

The next to address the crowd was Desiree who shared the results of other Block The Boat protests at other American ports.

As the heavy traffic almost drowned out her speech organizer Jessica promised to fight for Palestinian freedom and resist the occupation.

While he and a fellow USF medical school student hand painted a protest sign Kareem explained why he attended the protest:

St Petersburg resident Tommy stood along side the cargo entrance and shared his insights:

Two of the protesters, Tommy and Kareem protesters had words for the local longshoremen who unloaded the boat.

Protester Glenn hopes for a lasting peace in Palestine.

The Zim Alabama unloaded its cargo and quietly sailed for Mobile.