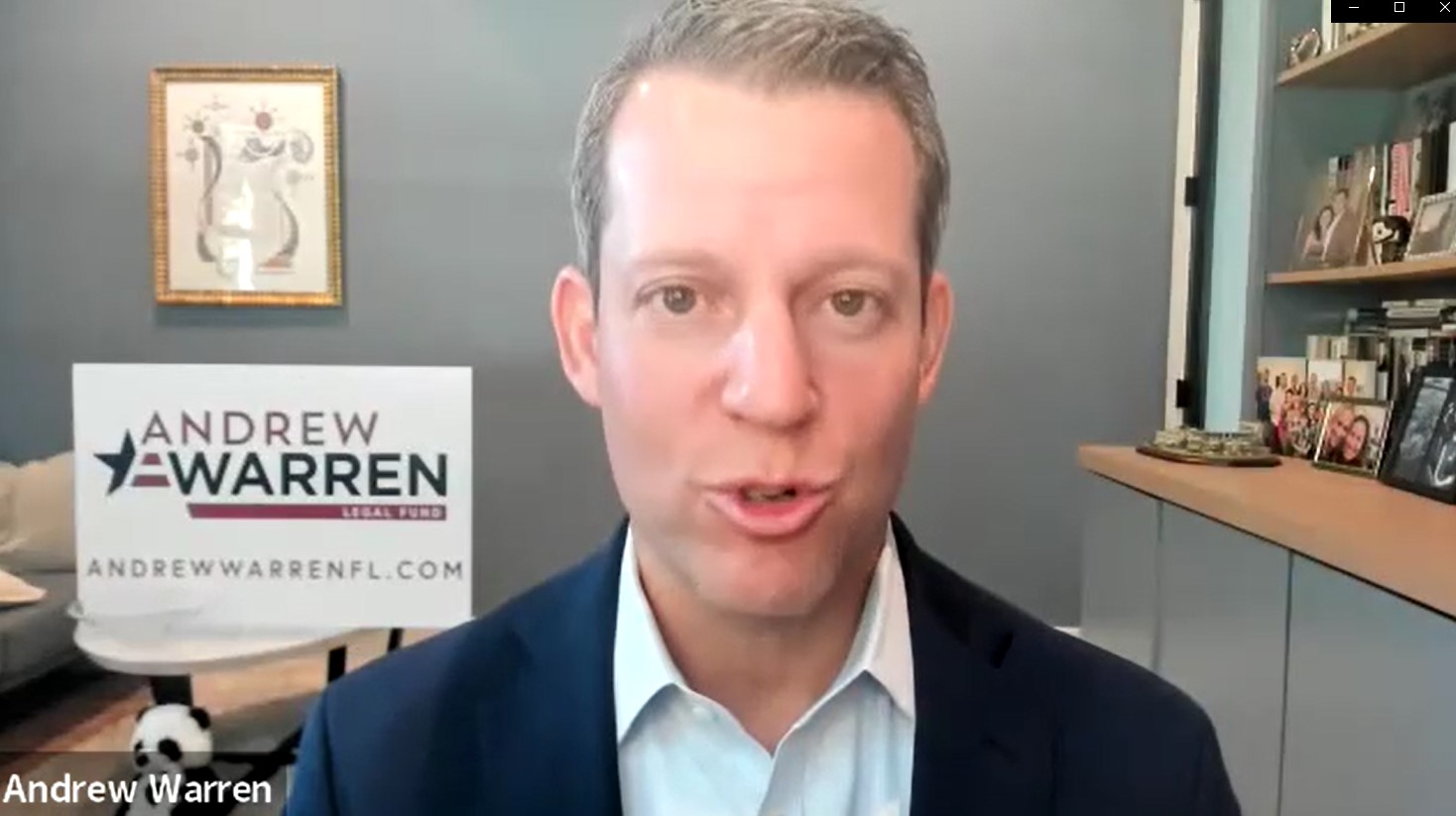 By Dara Kam ©2022 The News Service of Florida

TALLAHASSEE — Andrew Warren, a twice-elected Hillsborough County state attorney suspended by Gov. Ron DeSantis in August, took the stand Tuesday as he testified in a federal lawsuit aimed at getting his job back.

Warren’s testimony came on the first day of a trial before U.S. District Judge Robert Hinkle that could last until Friday.

Warren, a Democrat first elected in 2016 and re-elected in 2020, alleges in the lawsuit that DeSantis violated his First Amendment rights by removing him from office.

Testifying after opening arguments Tuesday, Warren said he is challenging the suspension because he wants “to be able to do the job that I was elected to” and so that voters would “have their rights protected.”

DeSantis’ Aug. 4 executive order suspending Warren accused the prosecutor of “incompetence and willful defiance of his duties.” The order pointed to a letter Warren signed pledging to avoid enforcing a new law preventing abortions after 15 weeks of pregnancy.

Warren and his attorneys spent much of Tuesday trying to establish that his office never established “blanket policies” about foregoing the prosecution of abortion-related crimes or refusing to prosecute laws that haven’t passed.

Joint statements he signed with dozens of other prosecutors across the country “were not policies of the office,” Warren said, but were “value statements” about the issues.

Warren also argued that prosecutors have discretion about how to spend resources.

“Case-specific review is a hallmark of our criminal justice system,” he said. “No statute, no law is exempt from this policy.”

Other witnesses Tuesday included Larry Keefe, an adviser to DeSantis who is known as the state’s “public safety czar.”

According to Keefe, DeSantis in December asked him if any state attorneys in Florida weren’t following the law. Keefe, a former U.S. attorney appointed by then-President Donald Trump, said he started an “ad hoc” inquiry into the issue by querying law-enforcement officials around the state.

“By the end of January or February, all roads were consistently leading to Mr. Warren,” he said.

Warren “was regarded as a state attorney whose approach to his job was harmful,” who was “hostile and antagonistic toward law enforcement” and who was “negatively impacting law enforcement and their ability to protect people,” Keefe said.

“The overall theme … was that his approach, the mindset … was creating an environment of lawlessness, chaos … That was what was stunning to me,” he added.

After talking with law-enforcement officials, including Hillsborough County Sheriff Chad Chronister, Keefe said he conducted an internet search on Warren.

Jean-Jacques Cabou, who represents Warren, repeatedly pointed to policies establishing that assistant prosecutors were told to use discretion in making charging decisions on a case-by-case basis.

But Keefe wasn’t swayed, he said.

“I don’t believe that … inoculates Mr. Warren from the consequences of the joint statements,” he said.

By signing the joint statements, Warren was effectively “nullifying” the law, Keefe argued.

“That is what is a threat to democracy to me,” he said.

“Your interpretation is not what’s at issue here,” Cabou said, adding that Warren’s actions were the focus of the lawsuit.

But Keefe refused to back down.

Allowing prosecutors to refuse to enforce laws would create “chaos and anarchy” in the criminal justice system, he said.

Cabou also asked Keefe if he ever questioned Warren about his approach to the controversial issues.

Keefe said he never communicated with anyone at the state attorney’s office, including by phone or email, until the day Warren was suspended.

The day Warren was suspended

Warren earlier Tuesday said he learned of his suspension in an email while he was with a grand jury working on a murder case that his office had solved after nearly three decades.

Keefe — accompanied by two sheriff’s deputies in uniforms — handed Warren a “partial copy” of the executive order in which DeSantis suspended Warren, who asked if he could review it. Keefe said no, according to Warren.

“The whole conversation lasted three minutes,” Warren said, adding that Keefe instructed the deputies to escort Warren out of the building.

When asked what he would have told Keefe if he were asked about the joint statements, Warren said he would have explained that “the two policies … were not blanket policies” and “were not policies of the office.”

Warren’s attorneys have argued that the governor overstepped his authority by suspending Warren and that the joint statements are “protected speech.”

During opening arguments Tuesday, Cabou told Hinkle that DeSantis suspended Warren “because of what he said and what he believes and because they’re different from what the governor believes.”

But George Levesque, an attorney who represents DeSantis, argued that the Republican governor suspended Warren “because he was refusing to enforce the law.”

Warren’s stance against the 15-week abortion restriction was “tantamount to a veto of state law,” Levesque argued. “Mr. Warren believes that he can be a law unto himself, choosing which laws are just and which laws he chooses to enforce,” Levesque added.

Warren and his supporters have maintained that DeSantis’ suspension was crafted to score political points with conservative voters.

Warren’s attorneys on Tuesday pointed to a Twitter post by Christina Pushaw, who at the time was a spokeswoman for DeSantis, the night before Warren’s suspension was announced.

“Prepare for the liberal media meltdown of the year,” Pushaw, who later went to work for DeSantis’ re-election campaign, tweeted on Aug. 3.

Levesque said Tuesday that Pushaw “was taken to the proverbial woodshed” for the post.

Warren’s suspension and subsequent lawsuit have drawn national attention, with more than 100 legal scholars and dozens of former judges, prosecutors and police chiefs decrying the governor’s actions in friend-of-the-court briefs.

Andrew Warren spoke to reporters before the trial

“We are fighting for free speech, for the integrity of our elections and for the very values of our democracy,” Warren told reporters before the trial began Tuesday.

“Good morning, everyone. It’s been 117 days since the governor suspended democracy and we are excited to finally have our day in court.

“A trial is a search for the truth and in this building the truth matters.

“As I’ve said from the beginning there is so much more at stake than my job, we’re not just fighting for me to do the job that I was elected to do. We’re fighting for the rights of voters across Florida to have the elected officials of their choice. We’re fighting for free speech, for the integrity of our elections and for the very values of our democracy.

“I am going to thank everybody who stood with me over the past four months words cannot adequately express how grateful I am for everyone’s support and their patriotism.”