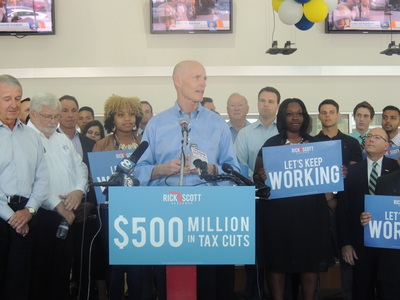 An Army reservist is suing the administration of Florida Governor Rick Scott because he claims he was illegally fired after being deployed to Afghanistan. Master Sergeant Walter Kreitlow had been employed in law enforcement since 1989. But he says on his third overseas deployment he was terminated from his position with the state Department of Business and Professional Regulation. In a conference call with reporters this morning, Kreitlow’s attorney Thomas Dickens said in doing so, the Scott administration violated the Florida Uniform Servicemembers Protection Act.

Kreitlow says before Rick Scott was elected governor he was deployed twice to Iraq and returned to his job.

Kreitlow says after he received his orders to deploy he was asked to sign a memorandum forfeiting his position and that’s the reason the Scott administration gives for not coming to a settlement regarding employment discrimination claims, leading to the lawsuit.