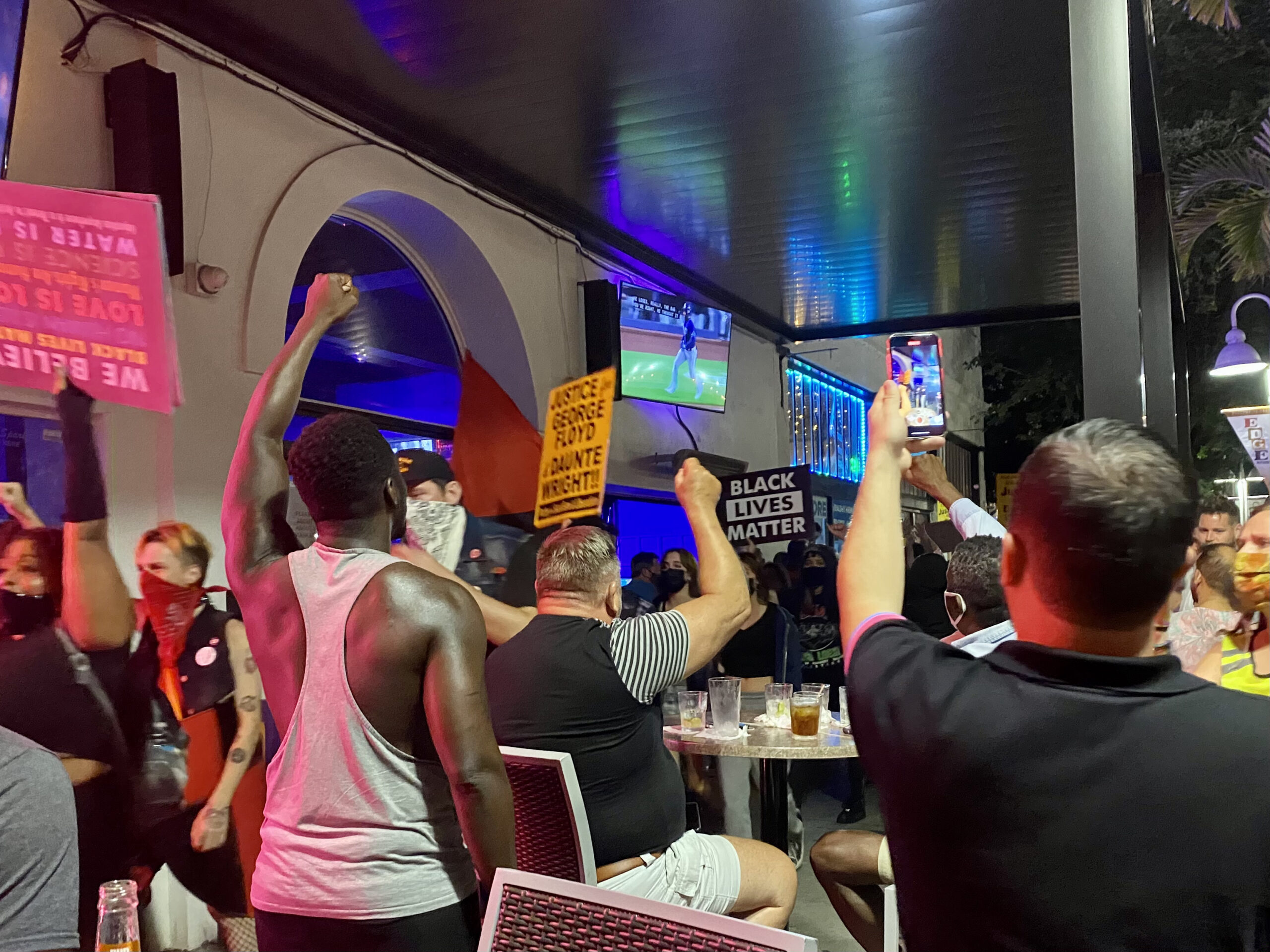 With the specter of Florida’s HB1 “anti-riot” bill looming, protestors in St. Pete returned to the streets Friday to demand justice for Daunte Wright, the 20-year-old Black man killed by police in a Minneapolis Suburb, and others.

Protestors didn’t know if the bill’s new restrictions on protesting would go into effect as they marched or what it could mean for them.

The protest was peaceful. But it wasn’t silent.

“Show me what democracy looks like,” someone called through a bullhorn as they marched down Central Avenue.

“This is what democracy looks like,” the crowd roared back.

More than 100 people gathered on the steps of St. Pete’s City Hall around 7 p.m. Most wore black. Both to mourn and to stand in solidarity with the Black Lives Matter movement. Protests in St. Pete and across the world began after video of George Floyd’s death at the hands of Minneapolis police was seen across the world.

As the world awaited a verdict in the trial of Floyd’s accused killer – one is expected to come this week – protestors added more names to the ever growing list of Black Americans killed by police.

Only a few miles from where the trial is taking place, Wright was shot and killed by an officer who claimed she mistook her gun for a taser. Wright was not armed.

There was also Adam Toledo, the 13-year-old boy killed by police in Chicago. Police said he had a gun, but body cam footage appears to show the officer shoot Adam as both hands were raised in the air. Both hands appear to be empty.

Before the march, participants, like Jalessa Blackshear of Tri-Partisan Canvas, spoke. HB1 was at the forefront of everyone’s mind.

“If you want to condone violence or you want escalation, please do not march with us,” Blackshear said. “I will personally ask you to leave and I’m gonna take your picture and I’m gonna call you out just like I do these guys.”

HB1, Governor Ron DeSantis’s top legislative priority this year, has been accused of having a chilling effect on First Amendment freedoms. Among many aspects seen as problematic, HB1 can make even the most peaceful of protestors culpable for felonious crimes if authorities decide a protest turns to a riot. It also loosens the definition of a riot and creates the “mob intimidation” crime. Under that section, any two or more people attempting to coerce someone “assume, abandon, or maintain a particular viewpoint against his or her will.”

And it offers immunity to drivers who might injure or kill marching protesters in intersections.

“If the governor would’ve signed it tonight, I probably wouldn’t have came out. As far as in the street. I would have rallied, had the vigil,” Blackshear said. “But I wouldn’t felt comfortable in being responsible for leading people to get felonies.”

HB1 passed both chambers of Florida’s legislature before the march and will go into effect immediately upon receiving the Governor’s signature.

Many though, were unmoved in their convictions. Ashley Green is an organizer with Tampa Bay Dream Defenders. She said her parents fought for Civil Rights 50 years ago. She can’t believe she still has to. Green said HB1 is frightening, especially since it could silence dissent by convicting dissenting voices with felonies, stripping them of the right to vote.

But she’ll still be in the streets.

“My ancestors risked their lives and I’m willing to risk my own,” Green said. “I just don’t want to die for something, I want to live for it. I want to live for freedom. And it’s so disgusting to hear people coopt the term ‘liberty and freedom’ while they are actively trying to suppress it.”

For nearly three hours they marched. At first in silence, sticking to sidewalks. They made their way down Second Avenue North and down Beach Drive, then around the Museum of Fine Arts and West across Central Avenue, heading back to City Hall once they reached 16th Street.

As they passed shops and restaurants, business owners and patrons offered words of encouragement with many raising fists up in solidarity. Passing Enigma, a bar in the Edge District, the crowd outside erupted in cheers.

There was no confrontation and no violence.

Once back at City Hall, Ruth Beltran, a Black-identifying Dominican woman from Bradenton spoke about her son. He turns 20 next month. The same age as Wright. She marched for him Friday. For the other mothers terrified whenever their sons and daughters leave home. She marched hoping for a day when she didn’t have to wonder if a traffic stop would rob her of her son.

Talking about it, she could hold back the tears.

“Our kids deserve a better world. Our kids deserve an opportunity to grow old. To grow past 20. Past 40. And to just age and live a regular life without having to be in fear that they’ll be killed. That their friends and families will be killed for any reason,” Beltran said. “Oh my goodness. It’s so real.”