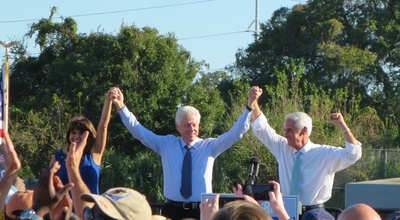 Bill Clinton urges Tampa to the vote out and vote for Charlie Crist for governor. The ex-president stumped for and with other Democrats Saturday at Cyrus Greene Park in Tampa. Bill Clinton’s visit brought star appeal and high approval ratings to Crist’s campaign.

Bill Clinton followed a line-up of Democrats which among others included Representative Kathy Castor, Senator Bill Nelson, Charlie Crist’s running mate Annette Taddeo and Charlie Crist himself. The message from all the speakers was clear: Floridians need to vote and get others to do the same. Clinton is confident obstacles won’t keep Floridians from voting in this year’s election.

Despite a Church and Football Sunday, nearly 1000 people got a hold of advanced tickets to come out and listen to Bill Clinton. According to Clinton the trickle-down economics of Rick Scott doesn’t work for the poor and middle class of Florida. Clinton said everyone needs access to the American dream to make it work.

Low voter turnout has been an issue with Democrats in the past and some polls think it might be an issue this year. US Representative Kathy Castor rallied the crowd to join a march after the event to go and vote.

There were some lighter moments. Kathy Castor gets the crowd to pose for a group-selfie to send to Hillary Clinton, whose birthday is today.

But the serious theme of today’s visit from Bill Clinton was about generating a big voter turnout. Crist listed off several talking point issues before summing up what he wants the crowd to take away from the event.

The general election is Tuesday November 4.