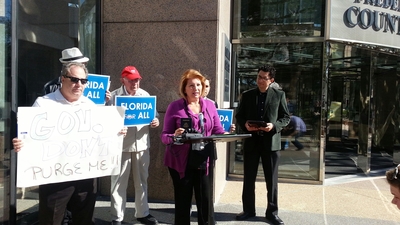 On Tuesday the Florida Senate passed a bill that would allow classroom teachers to carry firearms in schools.

Expanding the number of school employees who can carry a gun is part of the larger bill that deals with school safety in the aftermath of a mass shooting last year in Parkland. Last year the legislature allowed school employees who have a role outside the classroom to be eligible for what’s called the “guardian” program. The current bill expands that to make all teachers eligible, in school districts that allow the practice.

According to the AP, “teachers would have to volunteer, undergo psychological evaluations and be trained by a sheriff’s office.”

On Radioactivity we heard from several Senators speaking on the State Senate floor before the bill passed.

Here’s some of what Sen. Cruz said before she voted in the minority against the bill.

“I want to know how I’m going to go home in the next two weeks and face my constituents knowing that the vast majority of them are absolutely opposed to teachers carrying guns in the classroom. Students are already afraid in school.

“I know a young woman in high school in my district. She’s an excellent, excellent student. She wants to run for office some day. She talked to me about the anxiety she and her classmates feel in school every day. And our way of confronting them is giving their math teacher a gun.

“If we’re not listening to the teachers or the parents or the families, at the very least, please listen to these kids. They deserve to have their voices heard.”