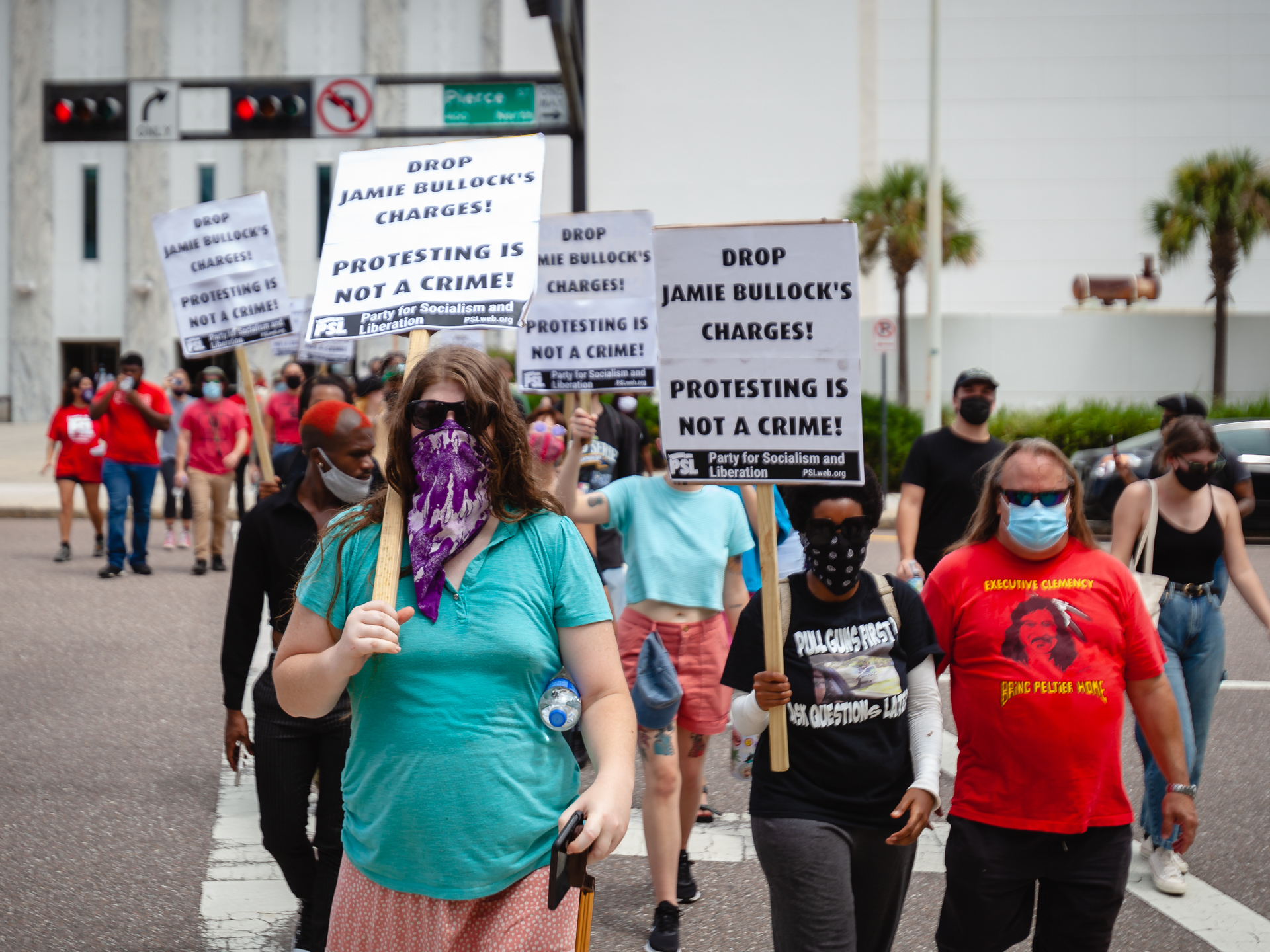 Battery on a law enforcement charges have been dropped for two Black Lives Matter protesters, Jamie Bullock and Chukwudi Uche.

That’s according to an email to WMNF from Grayson Kamm, the chief communications officer in the Office of the State Attorney of the 13th Judicial Circuit, Andrew Warren.

Kamm wrote, “In every prosecution, our office evaluates the appropriateness of the charges from the beginning of the case until the end.

“In this case, we received new evidence in the past few days—including bodycam video and interviews with defense witnesses—that had a direct impact on the State’s ability to prove all the required elements of a battery on a law enforcement officer charge beyond and to the exclusion of a reasonable doubt at trial.

“Other charges remain against the defendants because public safety requires we hold people accountable for illegally carrying a weapon or putting their hands on an officer.“

About those other charges, Kamm said that the State Attorney’s office agreed to diversion programs for the defendants. He wrote, “the defense had not requested diversion as an option until today. Like many first-time defendants, both Ms. Bullock and Mr. Uche were eligible for the programs, and our office typically agrees to allow eligible defendants to utilize diversion programs because they work—they’re effective at holding defendants accountable while allowing them to move forward and be productive in their lives.”

The WMNF story from September 29 is below:

A Black Lives Matter protestor accused of striking an officer during a 2020 protest rejected a plea deal that would drop the felony charge levied against her and keep her out of jail. Jamie Bullock turned down the offer as protestors chanted outside for charges to be dropped.

Laura Rodriguez with Students for a Democratic Society spoke during the protest.

“Since the summer SDS has done what we can to support Jamie,” Rodriguez said. “Whether that be through raising bail funds or coming out to speak at events like this. We will continue doing so until Jamie’s charges are dropped.”

Bullock was arrested last summer during a July 4th march along Tampa’s Dale Mabry Highway. Activists were protesting racial injustice and police brutality spurred by the murder of George Floyd by police, along with the killings of Ahmaud Arbery, Breonna Taylor and more.

Bullock was one of seven people arrested that day after police broke into the crowd. The then-21-year-old was charged with battery on a law enforcement officer, resisting arrest and obstructing traffic. The battery charge is a felony that carries a sentence of up to five years in prison. A spokesperson for Warren’s office, however, told WMNF Bullock would most likely get probation with no jail time since she has no criminal record.

During Tuesday’s hearing, the traffic charge was dropped and Bullock was again offered a plea deal. The deal would drop the felony charge if she pleaded guilty to the misdemeanor charge of resisting arrest without violence. It would also keep her out of jail as the sentence would be for time served.

At a protest earlier in the month, Bullock told WMNF she wouldn’t accept the plea because she is innocent.

“Everybody came out today too late the State know they care about my case. And that we’re gonna fight for my innocence to the last minute,” she said. “Many nights I’ve cried myself to sleep and considered suicide because at the end of the day it feels like the State doesn’t care about my story. They want to make an example of me. And it just really, sometimes it breaks my spirit t know that I am innocent.”

Rejecting the plea means Bullock will continue to fight the charges in a jury trial.