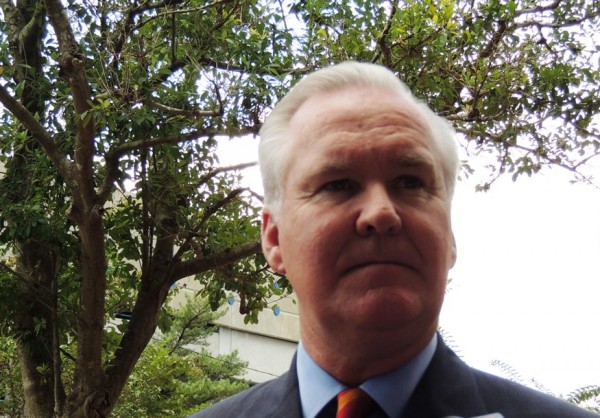 Note: after this story was published, Tampa City Council moved forward with an ordinance creating a police review board with only four members selected by council. Mayor Buckhorn said he will sign that. The original story is below:

Tampa Mayor Bob Buckhorn says he will veto a citizen board to review police actions if City Council passes an ordinance to create one that has more representatives selected by council than the mayor has proposed for a review board he created by executive order. “I would veto it,” Buckhorn said when WMNF News asked what he would do if Council passed an ordinance that includes 7 council-appointed members.

In consecutive press conferences Wednesday afternoon, City Council Chair Frank Reddick and Mayor Buckhorn appeared at odds about what would happen next. Reddick and Council will discuss a citizen review board ordinance at a meeting Thursday evening. Reddick said it will be a “critical vote.” They’ll debate the relative number of appointees by the Mayor and City Council. “I still stand firm — and will not walk away from — each member of the council being able to appoint one member of the board,” Reddick said.

But Mayor Buckhorn has said his final offer for City Council appointees is four out of the eleven-member board, but many of the City Council members agree with Reddick that there should be seven council appointments, one for each member.

A broad coalition of citizens is asking for a police review board that’s independent. That effort is being led by a group called Tampa For Justice. That group thinks the board being created by Buckhorn won’t be independent. But it also thinks the ordinance being considered by City Council doesn’t go far enough, regardless of the number of appointments by Council. A spokesperson, Laila Abdelaziz, says instead an ordinance is needed that has a budget and the ability to subpoena police and other witnesses.

“We do not accept the draft ordinance as it stands,” Abdelaziz told WMNF News.

Abdelaziz is with the Tampa chapter of Council on American-Islamic Relations (CAIR).

If the Council approves an ordinance that has more than four City Council appointments the mayor has said he would veto it. If the council overrides that veto, it would apparently set up a separate citizen review board from the one the mayor has declared through executive order. “They can set up an advisory board that will advise them. I’m not obligated as the mayor to staff it or to require police officers to appear before it. And to set up two separate boards is ridiculous,” Buckhorn said.