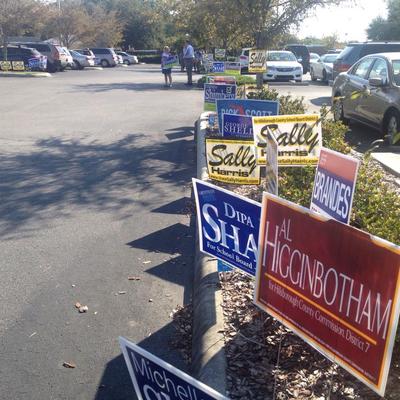 “It’s just great to see all this energy around early voting,” Kemp said. “Democrats have been known to fall behind… in Hillsborough County. It shows a lot of energy for this non-presidential year election, where we typically have a harder bit of time.”

Another candidate at the rally in South Tampa is Judithanne McLauchlan. She’s a Democrat running for a state senate seat.

“Thank you for all you’re doing,” McLauchlan told her volunteers. “We’re phone banking, we’re canvassing, we’re doing neighbor to neighbor postcards. We need your help in this final push to get out the vote.”

McLauchlan is running in District 22, which stretches from South Tampa to St. Petersburg. She is running against current state senator Jeff Brandes, a Republican, who ran essentially unopposed in 2012.

“In 2012, voters in District 22 essentially didn’t get a choice,” said volunteer Brian Farris.

During the rally, many voters headed inside to cast their ballots. Since media are restricted to an area far from the entrance, voters couldn’t be interviewed.

McLaunchlan and her volunteers dodged cars, as they raised signs in the busy parking lot.

“We really wanted to highlight that today is kicking off early voting,” McLauchlan told WMNF News. “Every vote is so important. Especially in this race…This Senate district is the only 50-50 split district in Florida.”

The Hillsborough County Supervisor of Elections is tracking early voting online. As of 3:30 p.m. on Thursday, nearly 84,000 people in Hillsborough had cast either mail-in or advance ballots.

Learn more about early voting hours and locations in several counties across the region.