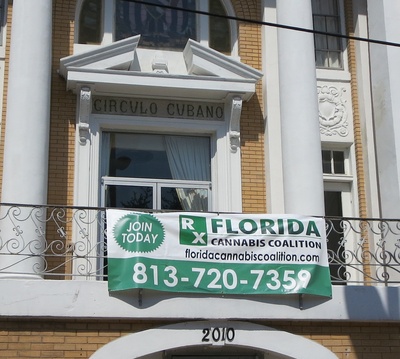 Legalized growing and distribution of marijuana is often viewed in context of medical applications. Yet, hemp is a renewable cannabis product which has a range of uses like oil, wax, resin, rope, cloth, paper, and even food. Steven Edmund, co-founder of One Florida Foundation, a water policy advocacy group, is sure Florida’s ecology and economy will benefit from cannabis crops.

“So anything that is 0.3% THC or less; so you could smoke the whole field and not get high; would be off of the controlled substance list. Which would open up $9.6 billion worth of economy overnight. What we’re proposing is that you exempt the industrial hemp industry from traditional taxes and in place put an excise tax…a hemp for water tax excise tax.”

The all day event hosted at the Cuban American Club, included advocates, lawyers, political candidates, physicians and botanists as well as 50 or so attendees. Peter Sessa, chief operation officer of the Florida Cannabis Coalition, co-sponsor of the event, said planning a marijuana industry in Florida can be a lot of red tape.

“A lot of things with the taxes; how they’re set up and the zoning regulations. So you look to other states to see how zoning is going to work or how they’ve done it and we see how that would work here. and then we look at things that are different; from Florida; that are unique to Florida. We’ve had pill mills here. So that’s going to be a big deal when they start legislating this, they are going to look at what happened there. And they’re going to try to avoid that situation here.”

Criminalization of drug use in America is viewed by some as a wrong approach. Bill Wohlsifer, Libertarian candidate for Florida Attorney General, said the turmoil in Ferguson Missouri has exposed the problems that are the result of the war on drugs

“When the police were on our streets (Tampa) looking like they were getting ready to invade a foreign nation. That’s a slippery slope and that will create a divide, in my opinion, between the civilian population they’re (police) sworn and dedicated to protect and the force themselves. And a lot of this is the result of the war on drugs. It’s a result of, in my opinion, the illegal forfeiture of personal property which is fueling all that militarized equipment we see. Up until recently that the federal government has surplus that they’re putting into communities that have no need for it. It’s just dangerous. It’s not the intention of the civil police force.”

If elected Attorney General he wants to evaluate the effectiveness of law enforcement beefing up it’s crime fighting arsenal.

“A blue ribbon, top to bottom study of the effectiveness, the militarization, the inherent risks and the inherent dangers. Really take a look at what we’re doing and see if we can hold it in check. And to have body camera’s on law enforcement officers when they’re doing their public duty in public. Not everywhere. But when they’re in public.”

Recreational use of marijuana may be in Florida’s future, but for now, it’s about legalizing it for medical use. Anneliese Clark is a member of CannaMom, a group of mothers who want medical marijuana treatment for their severely ill kids. Like other members of CannaMom her child benefits from whole plant cannabis.

“I have realized that the THC is extremely important. So the plant itself; extracting one cannabinoid out of the plant isn’t going to fit for everybody. Just like some people take Tylenol; some take Advil and some take Motrin. Charlotte’s Web isn’t going to work for everyone. And my daughter needs both the THC, the CBD, the CBC, the CBG. There’s a lot of cannabinoids that are extremely important to her condition.

Amendment 2 will appear as, Use of Marijuana for Certain Medical Conditions, on November’s ballot.