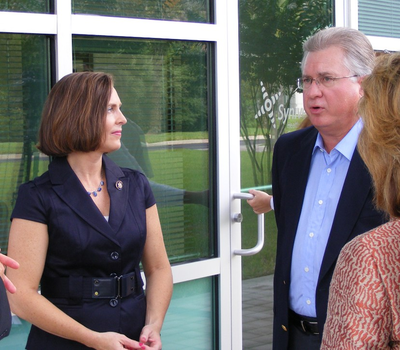 Congress is not expected to vote on a major health care overhaul until after they return from an August recess. This morning in New Tampa, U.S. Representative Kathy Castor announced details of an amendment she has proposed. If it’s included in the bill known as America’s Affordable Health Choices Act of 2009, the amendment would give grants to companies that provide wellness programs to their employees.

Rep. Castor, a Democrat from Tampa, has filed the wellness program grant amendment in the Energy & Commerce Committee. She says it has support of the committee’s chair Henry Waxman.

“My amendment offers to pay 50% of the initial start-up costs of wellness programs on-site at businesses. And then once they get them up and running they will achieve those costs and be able to sustain them in the long run and have a healthier workforce and a more prosperous bottom line.”

Syniverse Technologies is a communications business that employs about 1100 people worldwide – about 650 of which work at their corporate headquarters in New Tampa. On July 6th they opened an on-site clinic staffed by a full-time nurse practitioner and they kicked off a wellness program for their employees. Tony Holcome, president and CEO of Syniverse, calls it a cost-saving measure despite the up-front investment.

“There’s some initial start-up costs. It’s, we believe, roughly a break even. But over time, over a five year horizon, we believe as we reduce the number of [health insurance] claims, we get more people involved in wellness programs, we could expect to see – as Congresswoman Castor mentioned – roughly about a million dollars worth of savings over that five year period. If we take aggressive action to prevent disease from happening and keep people on their medicines for chronic illnesses, then they’re going to lead healthier lives. If they have a healthier life, the health care costs go down.”

The full-time nurse practitioner working at Syniverse, Ashley Ross, says she sees about 6-12 employee/patients per day. She maintains contact with a collaborating physician off site and other nurse practitioners. Ross makes referrals to specialists for patients who need more than primary care.

Services of an employer-based wellness program could include health education, health screenings, and developing a wellness plan. Employees can still purchase private insurance in case of more serious illnesses. Only large companies like Syniverse are able to afford a work-site clinic and employ a nurse practitioner, but Representative Castor says that if her amendment passes, small businesses could also take advantage of the wellness program grant.

“There will be incentives for companies to join together to pool resources. Here we are in the very expansive New Tampa Highwoods Preserve where we have a number of companies. I envision we may get to the point where various businesses are coming together. We need to do a better job in schools with nurses on site. We need to do a better job with community health centers scattered throughout our community so in the end it’s convenient for folks who are leading busy lives to get the health care they need.”

During a debate last summer with Republican presidential nominee John McCain, Obama said of health care, “I think it should be a right for every American.” But in his news conference last Wednesday, Obama said that the health care reform bill would leave two to three percent of Americans without health coverage. That could mean as many as nine million people in the country would still not have access to health care. Both the president and Representative Castor are supporting what is being called a “public option” to compete with private insurance companies.

“For a state like Florida, that has almost 20 to 25 percent – maybe even higher – of folks who do not have access to affordable health care – they don’t have an employer that offers it and with their families, they can’t afford it – there will be a non-profit public option in the end that will be a place that they can go to find affordable health insurance.”

Syniverse provides services to mobile communications companies – such as making sure that customers can keep their mobile phone numbers when switching providers. CEO Tony Holcombe says the company decided to open an on-site clinic after getting feedback from employees.

The plan Holcombe is describing is a type of limited single-payer health care system where all expenses are paid by a single-payer – in this case, the employer. In his television news conference on health care last Wednesday, President Barack Obama admitted that, “unless you have a—what’s called a single-payer system, in which everybody’s automatically covered, then you’re probably not going to reach every single individual.” WMNF asked Representative Castor why neither she nor Obama supports a national single-payer system, but instead are backing plans that will leave millions of people without access to health care. Castor’s answer was very similar to the response by President Obama to the question.

“If you were starting from scratch, I think here in America, we would opt for a single-payer. But right now we have a very robust private insurance provided by employers system. And most folks are happy with that. They don’t like the escalating costs; they don’t like the fact that the costs of health care have risen three times the rate of wages over the past decade. But in general they’re pleased. But we do have a significant problem with the large number of uninsured, especially here in Florida.”

Castor and Lee S. Rosen says that one reason why health care costs are rising so quickly is because of the large number of uninsured Americans.

Obama: health care “should be a right for every American”

Physicians for a National Health Program