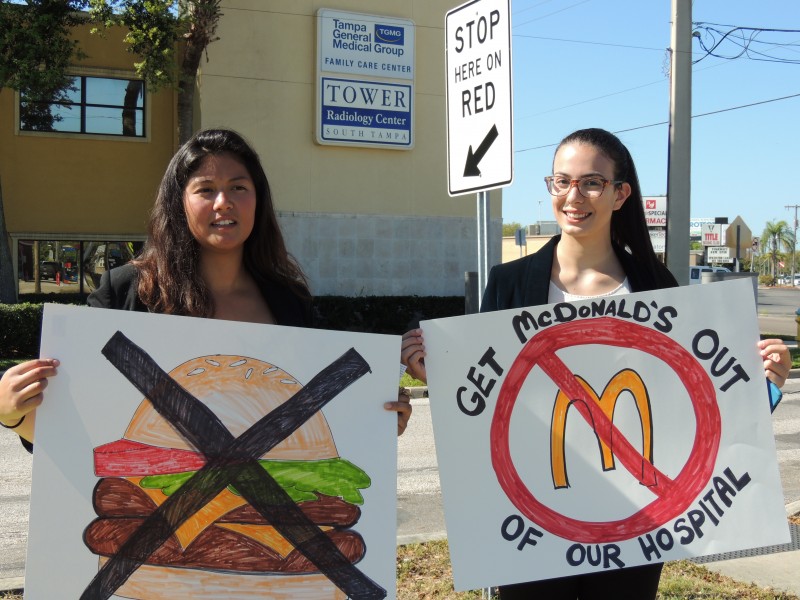 A coalition of citizens is asking Tampa General Hospital to get rid of its McDonald’s fast food franchise; but the hospital says it can’t because of a long-term contract.

Elena Cuadros, with Corporate Accountability International, was part of a group of about ten people who held signs and delivered more than one thousand petitions Wednesday morning.

“It’s absolutely not a good idea to have the McDonald’s there. Especially in this time of epidemic of diet-related diseases like Type II Diabetes, heart disease – especially here in Tampa. And having a McDonald’s there sends the false message, with the false health association between McDonalds and a hospital.”

Standing on a busy south Tampa intersection along Henderson Boulevard in front of the Tampa General Medical Group building, Cuadros said a McDonald’s in a hospital sends the wrong message.

But John Dunn, a spokesperson for Tampa General, says the hospital can’t get out of its contract with McDonald’s until 2023.

“This contract was negotiated in 1988 when Tampa General was a public hospital that was owned and operated by Hillsborough County. Under the provisions in the contract it runs through 2023 and it contains no provisions that would allow the hospital to break the contract under any circumstance. I don’t think anyone today would negotiate that kind of a contract with anybody. … About three or four years ago we looked at being able to not have a McDonald’s in the hospital. We gave it to not one, but two different attorneys to look at. And the opinion that came back was that we were locked in until 2023.”

But a doctor says getting rid of the McDonald’s is important enough that Tampa General should just break the contract, even if it costs the hospital money. Dr. Lawrence Floriani is with Doctors for America, which advocates for high-quality, affordable health care for everyone.

Floriani says “there are probably a million preventable deaths a year in the U.S. that are due to lifestyle illnesses” and many of them can be prevented by stopping people from having what he calls a “McDonald’s-style diet – high in fats, carbs and sodium.”

Dunn, the Tampa General Hospital spokesperson, says hospital staff and visitors have other choices if they prefer not to eat at McDonald’s.

“It does tend to send kind of a mixed message to people because of the way that McDonald’s used to be. But they have made some changes in their menu. The other thing that people need to understand is we have other choices for people to eat. We have a food court where you can go and get healthy food. It’s not as if McDonald’s is the only place in the hospital for people to eat. And people are very well educated today about the connection between the food they eat and their health. And it really is up to people to decide what they want to eat and the impact it’ll have on their health. It’s really their choice.”

But Janet Lorenz, a nurse at Tampa General, says there aren’t any food alternatives to McDonald’s for staff, patients or families after midnight when the cafeteria closes.

“Well, I try to bring my food from home because I know that that’s the reality. And if I do forget my food I make sure that I go to the cafeteria before midnight. Or if I don’t get a chance, like I’m too busy – which sometimes happens – and I didn’t bring food then I scrounge around and find whatever I can. Sometimes we have leftover food in the break room. But I usually just go hungry because I don’t eat McDonald’s.”

Cuadros, from Corporate Accountability International says of TGH, “we would like them to come out and publically state they will not renew the contract once it ends in 2023.”