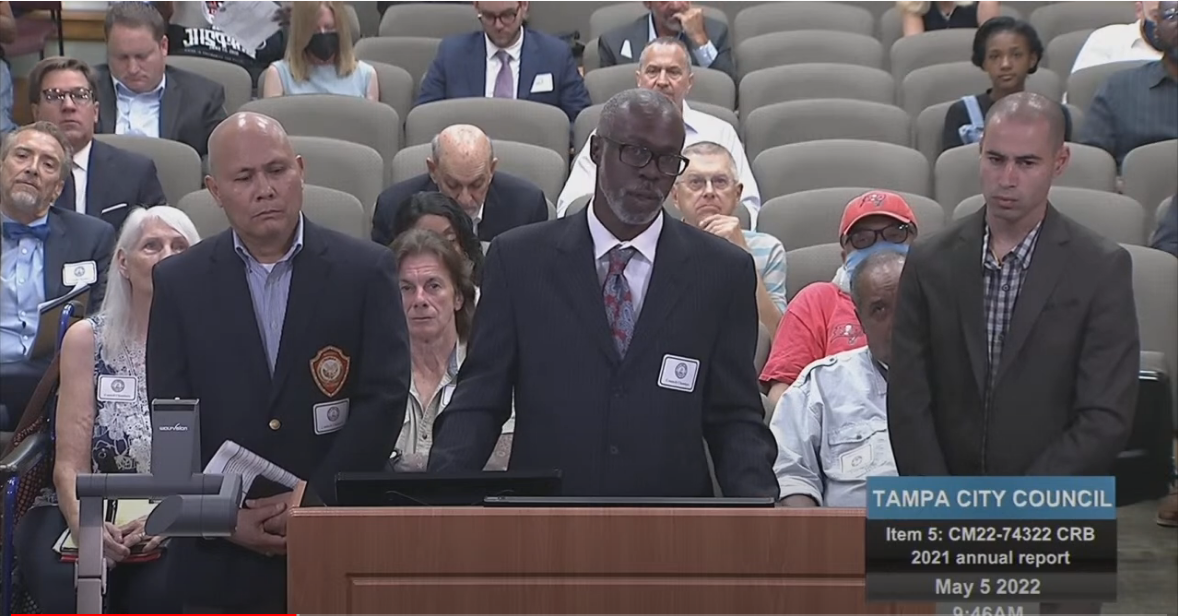 Last Friday, the city of Tampa quietly shared in a news release that the city is under federal investigation by the U.S. Department of Justice for its now-defunct Crime Free Housing Program — and has been since December 2021.

According to a December 2021 letter sent to the city by the DOJ, the investigation is focused on whether the Tampa Police Department’s Crime Free Housing Program, which partnered with local landlords, violated the Fair Housing Act by making unavailable or denying housing units. That law “prohibits discrimination in housing on the basis of race, color, national origin, and other protected categories.”

Last year, a Tampa Bay Times investigation found that over the course of the program’s eight-year lifespan, Tampa police officers sent hundreds of letters that encouraged landlords to evict local tenants based on arrests. About 90 percent of renters flagged for eviction during that time were Black. And some renters who were flagged for eviction weren’t convicted, and later had their charges dropped. The program thrust many into unstable housing situations that disrupted the lives of not only individual renters, but their families as well.

As the Times reported last week, this is the second time in seven years that the city has been under federal investigation for a Tampa Police Department program that’s been accused of being racially-discriminatory. And although the city was initially informed of the investigation in December, some elected officials say they were left in the dark.

During Tampa City Council’s scheduled regular meeting on Thursday, council member Bill Carlson said council had only been notified of the investigation through last week’s news release, and not by the city administration. As reported by Florida Politics, the city’s chief of staff John Bennett said the city “made everyone aware” of the investigation as soon as they were notified. But Carlson disputed this.

“All of us found out on Friday through a press conference the Mayor had that the city has been under the second Justice Department investigation for civil rights in seven years,” said City Council member Bill Carlson on Thursday. The city of Tampa administration, currently led by Mayor Jane Castor, has clashed with members of City Council on multiple occasions in recent months – including Carlson – in part due to subpar communication between the city and City Council, and an issue of transparency, which the administration says they’re working on.

But it wasn’t just the seven-member Tampa City Council who were left in the dark.

Rasheed Aquil, who serves as chair of the Citizens Review Board (CRB) for the Tampa Police Department, confirmed to council Thursday that they also hadn’t been notified of the investigation.  “We have not received any notification or presentation,” Aquil said.

The Citizens Review Board is a citizen oversight panel, first launched in 2015 under former Mayor Bob Buckhorn. It reviews closed disciplinary cases and other issues relevant to the police department and of interest to the community. The CRB serves to “enhance trust between the Tampa Police Department and the community it serves,” according to the city website.

Members of the CRB attended Thursday’s City Council meeting to present an annual report to council. In the past, the board, which does not have the authority to discipline TPD officers, has been criticized as “toothless” by local criminal justice advocates. In 2020, during the height of Black Lives Matter protests that arose following the police killing of George Floyd, advocates called for reforms to strengthen the CRB, often butting heads with the local police union, which opposed some of the more substantial reforms proposed. Following public pressure, some minimal changes were made last year.

What’s worth noting today is that the Citizens Review Board was created in the wake of another Tampa Bay Times investigation from several years ago, which found that a former TPD bike stop program was disproportionately ticketing Black bikers in the city. That program, colloquially referred to as “Biking while Black,” was also investigated by the U.S. Department of Justice. From that investigation, the DOJ found that Tampa police officers unfairly targeted Black bicyclists, and that the program did not reduce bike theft or related crime.

Tampa Mayor Jane Castor served as chief of police at the Tampa Police Department from 2009 to 2015, and oversaw “Biking while Black,” alongside former assistant police chief Mary O’Connor. Last month, O’Connor was appointed chief of the Tampa Police Department by Mayor Castor, to replace former chief Brian Dugan. Her appointment was approved by council in a divided vote.

The latest Department of Justice investigation

According to § 18-8 (c)(6) of the city’s Citizens Review Board ordinance, one duty of the CRB is to “review matters of importance or interest and make written recommendations regarding the department’s handling of an issue, including any revisions or additions to department policy and procedures.”

A federal investigation into a Tampa Police Department program would presumably fall under the category of a “matter of importance.” Under Subsection (H)(3), a CRB coordinator is required to inform the oversight board of any changes in TPD’s use-of-force policy. But local attorney James Michael Shaw Jr., who volunteers with the local ACLU chapter,  told WMNF there is no clear requirement within the ordinance that the city inform the CRB of a case like this.

WMNF reached out to Adam Smith, the city’s Director of Communications, to confirm that the CRB was not notified by the city of the DOJ’s investigation into the former TPD program in December, or since the investigation was first publicly announced last week.

In an email response, Smith declined to answer. He wrote, “We are not commenting beyond the news conference you were invited to last week until the Justice Department investigation is concluded.”

‘It’s up to them to take the initiative’

The city may not have been required to inform the CRB of the Department of Justice investigation. But according to Shaw, the Citizens Review Board could have requested information about the Crime Free Housing Program when local civil rights and legal groups were raising concerns about it last year. “The way the ordinance is written, the CRB can review matters of importance or interest and make written recommendations, which then have to be responded to within 30 days,” said Shaw. “They can do that on their own initiative without anybody bringing the issue to them. But it’s up to them, to take the initiative.”

The Times’ investigation into the Crime-Free Housing Program, which found the program disproportionately flagged Black renters in majority-Black neighborhoods, was first published in September 2021. Facing pressure from a national coalition of legal and civil rights groups, Tampa Mayor Jane Castor halted the program on December 1, 2021 – and replaced it with the new Safety Awareness for Everyone (SAFE) program, which does not have police officers send notices to landlords.

“The bottom line is that the City of Tampa believes firmly that every resident, regardless of income level or address, deserves to feel safe, and partnerships like SAFE help prevent crime,” said Castor, in a statement that was included in last Friday’s news release.

Still, the lack of transparency from the city about the federal government’s investigation has concerned advocates and some elected city officials. Online, attorney James Shaw wrote an extensive thread on Twitter, expressing criticism over the mayor’s press conference last Friday, and providing analysis of information that public records have revealed about the Crime Free Housing Program.

“We never thought you were perfect,” wrote Shaw, referring to Mayor Jane Castor. “No one is. But some leaders admit their mistakes and strive to make them right, others deny them. When we elected you, we were hoping you’d be the first kind. It’s not too late to be.”

Last year, Castor defended the Crime-Free Housing Program, even after the Times’ findings were made publicly known, and has been critical of the media’s reporting on the program.

Civil right activist Connie Burton, who spoke out against “Renting while Black” last year, and “Biking while Black” in 2015, told Creative Loafing she’s also dismayed with the response from the mayor, who has maintained that media inaccurately represented the CFHP’s outcomes. “The mayor has left a trail of dishonesty,” said Burton. “And the people can see the way she has dealt with poor and working class Black people. It’s always dictatorial and punitive. These programs just made things worse for us.”

Yvette Lewis, president of the Hillsborough NAACP, told the Times last week, “The truth will come out. The Tampa Police Department has got to stop over policing the African-American community.”

Council member Bill Carlson shared his frustrations about the city’s lack of clear communication with council and the Citizens Review Board on Thursday, after learning the CRB had also been left out of the loop about the DOJ investigation launched in December. “We know anecdotally there’s a lot of concern in the community about civil rights abuses,” said Carlson. “It’s not a rank and file police issue,” he added. “It’s a policy issue. Somebody created a policy to do this [CFHP] and you know, the hard-working men and women in the police department were following orders. But the question is, what should the policies be going forward?”