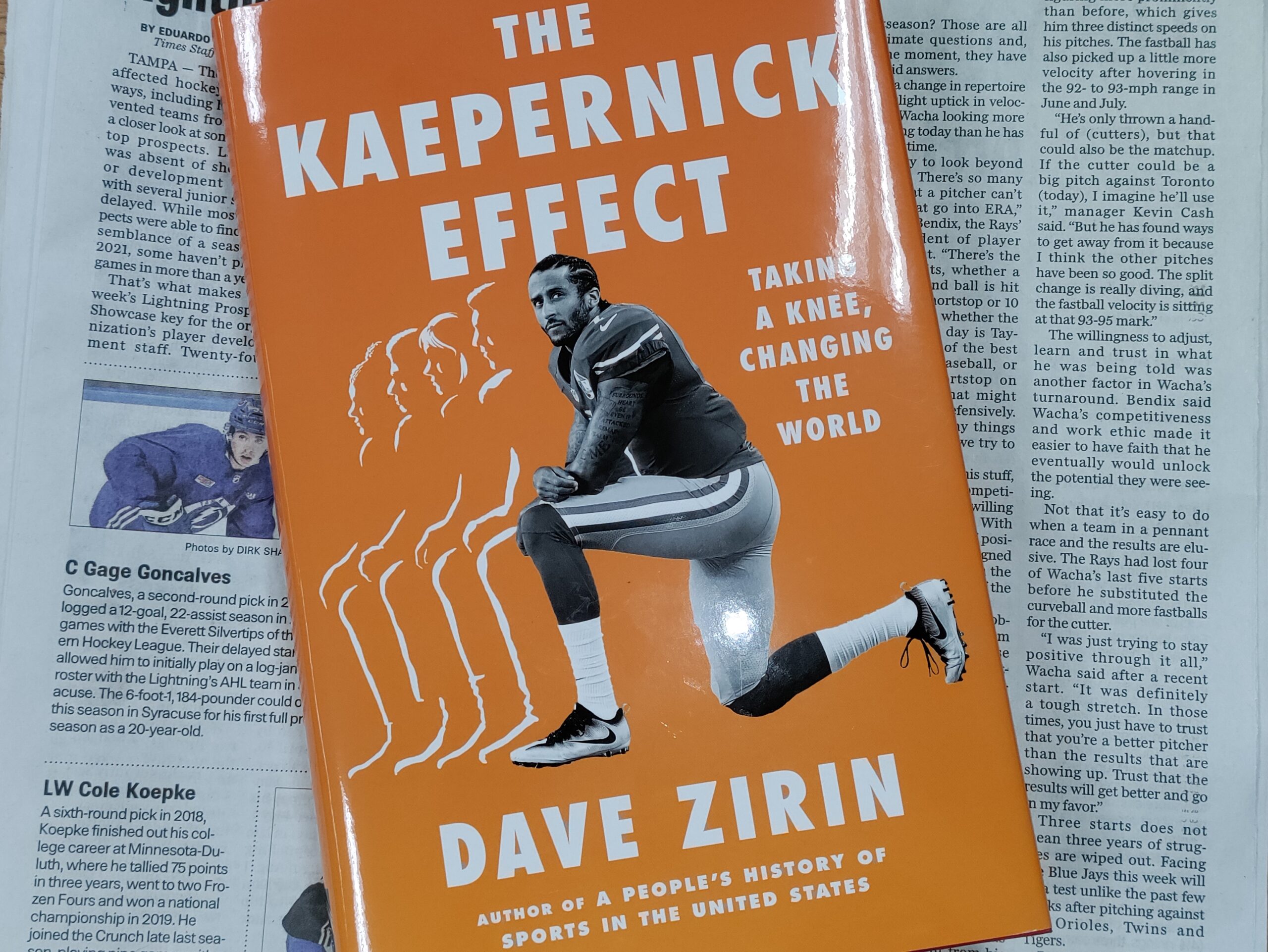 The sports editor of The Nation, Dave Zirin, has written a new book about sports and activism called The Kaepernick Effect. Taking a Knee, Changing The World. It’s published by The New Press.

WMNF’s Seán Kinane interviewed Zirin, who spoke about who Colin Kaepernick is and about how the actions he took inspired the athletes he interviewed for this book.

Kaepernick received death threats and ostracization — but his protest laid the groundwork for the widespread 2020 Black Lives Matter protests.

In the book, Zirin juxtaposes the image of Kaepernick taking a knee to protest versus the event that inspired the 2020 protest: Officer Derek Chauvin kneeling on George Floyd’s neck until he died.

The protest in the NFL started in 2016 with players sitting on a bench during the National Anthem but transitioned to taking a knee instead.

The first athlete to take a knee after Kaep was Rodney Axon, Jr., a football player at Brunswick High School in Ohio, a predominantly White school.

In addition, in Texas, players in a predominantly Black league of high schools protested and the league was canceled. They reformed as a nonprofit and equipment was purchased by sympathetic NFL players.

Zirin spoke with a coach in Camden, New Jersey who was concerned about how post-9/11 sports and patriotism had gotten intertwined.

Concern about the third verse of The Star-Spangled Banner

A coach in Seattle had his players read the third verse of The Star-Spangled Banner, which isn’t usually sung as part of the National Anthem. That verse talks about hunting down and killing slaves and is printed in Zirin’s book:

No refuge could save the hireling and slave
From the terror of flight or the gloom of the grave,
And the star-spangled banner in triumph doth wave
O’er the land of the free and the home of the brave.

A softball player at the same school said people don’t like Kaep — but in their times people didn’t like MLK or Malcolm X either, because they were helping people and starting a revolution.

In a lot of the high school examples, it was teachers who showed solidarity with the kneelers.

Inspired by the death of Trayvon Martin

A common theme: because of the ages of many of the students — their activism and awakeness came around the time they learned about Trayvon Martin, who was killed in Sanford, Florida.

“The similarities that I felt when I spoke to these young folks with the way they would talk about Travon
Martin. In the way that the young civil rights activists spoke about — my goodness — Emmett Till.

“I mean the similarity is just so strong. I’ve seen that on Eyes on the Prize documentary.

“And I’d seen that with folks that I’d interviewed — some of the vets of the movement that I’ve interviewed over the years here in the [Washington] D. C. area.

“Emmett Till marked them. I mean I would describe it as an all-American trauma, which took place then.

“And there was a similar all-American trauma for these young people when Travon Martin was killed. And that was a revelation for me.

“And what you said in your question, Seán, gets the point right on the head.

“Like, if they’re 19 [now], they’re basically 10 years old when Travon Martin was killed.

“So you’re just old enough to be following the news and knowing what’s happening and just young enough to not understand why the world has to be like this.

“So that really, really did mark them. And it animated them far more than the name Colin Kaepernick when I would speak to them about why they took a knee.”

A student at a small Iowa college resigned from her cheer squad because of pressure from the college administration.

Another cheer student you interviewed is actually from the Tampa Bay area — Odessa, Florida. Sydney Stallworth was at Howard University in Washington, D.C.

A women’s basketball player at U.C. Santa Barbara was booed by her own fans, who also threw trash and left. But they got applauded when they played a road game in Seattle.

They also planned a Social Justice Game, but her coach blamed the kneelers for the loss that game. But years later the coach embraced the Black Lives Matter movement.

A women’s lacrosse player at a small college in Illinois pointed out that athletics coaches spent time to recruit Black players for football, basketball and track teams but don’t put in the effort to holistically support them on social issues. They only support them on the court. In white spaces they only care about team bonding or gaslighting by trying to silence protests.

Solidarity among White athletes and coaches

A White basketball coach in Vermont knelt along with his players. “I think that (racist) systems and whiteness don’t appreciate it when they show solidarity.” Most coaching models are authoritative and based on white supremacy. Now it’s cool to fight back against social injustice. But there has to be a first group that talks about it when it’s unpopular.

Some of the White college students that took a knee that you interviewed were LGBTQ or talked about the importance of intersectionality or about white privilege: the responsibility to take antiracist actions to take some of the risk away or show solidarity with Black athletes. Many were bombarded with misogynistic messages.

Gwen Berry is a champion hammer thrower who raised a fist. She’s from Ferguson. That’s now led to the Olympic committee coming down hard against political protests.

“The U.S. Soccer Federation says it has offered identical contract proposals to the players’ associations for the men’s and women’s national teams, and the governing body said it would refuse to agree to a deal in which World Cup prize money is not equalized. The unions for the men and women are separate. Under federal labor law, they have no obligation to bargain jointly or to agree to similar terms.”

In the NHL, the first incident of activism inspired by Kaepernick’s kneeling happened in Oct. 2017. That’s when Tampa Bay Lightning winger J.T. Brown raised his fist during the national anthem. He said he did it to raise awareness about racial inequality and police brutality.” He’s now a broadcaster for the expansion Seattle Kraken.

Earlier this year three Black players are thought to be the first all-Black starting forward line in NHL history. The Tampa Bay Lightning’s Daniel Walcott, Mathieu Joseph and Gemel Smith started a game in May of 2021.