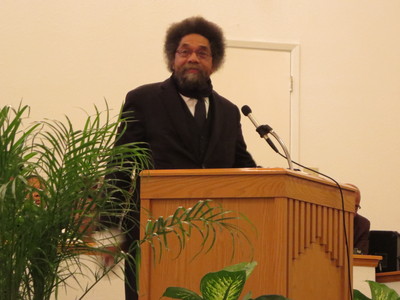 Dr. Cornel West, a polarizing black intellectual, gave an electrifying speech at an overflowing church Wednesday night in St. Petersburg. West spoke as part of the Heritage Lecture Series put on by St. Petersburg College and a community nonprofit run by Mt. Zion AME Church. West made full use of his seminary training in a hybrid mix of sermon and lecture.

West touched on a broad swath of topics ranging from law enforcement violence to drone warfare and conservative media. The thread running through his entire presentation was humanity. West emphasized the commonality of all humans.

Cornel West, an Ivy League educated professor, doesn’t shy away from putting his money where is mouth is. He was arrested after joining protests in Ferguson, Missouri. West sees what happened in Ferguson as a paradigm shift.

Holding the media accountable for reporting the news is high on Cornel West’s list. He is critical of both liberal and conservative media.

According to West, the black community should not be content with a few people of color overcoming stereotypes.

West takes aim at President Barack Obama and some of his cabinet for effectively shirking their moral obligation to the black community.

Today the Obama administration launched two separate US drone attacks in Pakistan, thought to have killed 5 to 7 people each. West makes short order of his condemnation of drone warfare.