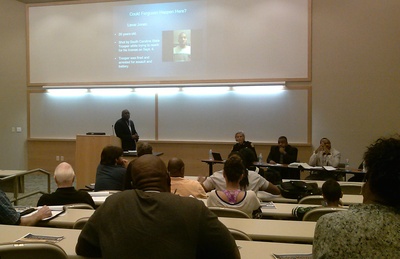 The Black community perceives law enforcement through a lens of personal experience and how the media cover the news. It was evident during a forum Thursday night at USF on whether Ferguson, Missouri, styled civil unrest could happen in Tampa.

A recent Pew Research Center poll found a staggering racial divide in perception of the Ferguson police response to the death of Michael Brown. 65% of Blacks say the police went too far compared to only 33% of Whites. Some point to the police use of special tactics and military weaponry when dealing with civil unrest. Before the panel discussion Tampa Chief of Police Jane Castor maintains her police force only use these measures sparingly.

Castor has authorized a pilot program for 60 officers to wear body cameras but she hopes by the end of next year most Tampa Police will wear body cameras. Activists suggest more police should wear body cameras for accountability and to reduce reports of police violence. Panelist Alec Hall is a federal public defender and thinks it will be difficult to change the perception among Blacks of police overreach.

So … what is the responsibility of the media in shaping perception? NPR media critic Eric Deggans, who was moderator, said the media got it right in their initial coverage of Ferguson because they bore witness to the event. But, Deggans feels they got it wrong by losing objectivity.

It can seem hard to know which media to trust for valid and vetted news and information. Eric Deggans said that different media play different roles; television is immediate and emotional; print either paper or online is detailed and fact checked, and social media calls people to action. Deggans said people need to manage their expectations of the media.

It can be tricky for commercial media to strike a balance between sponsors and journalistic integrity. This might be especially true when reporting on police profiling or racial discord. Glenn Cherry, CEO of the black newspaper Florida Courier, is adamant that independent media is necessary.