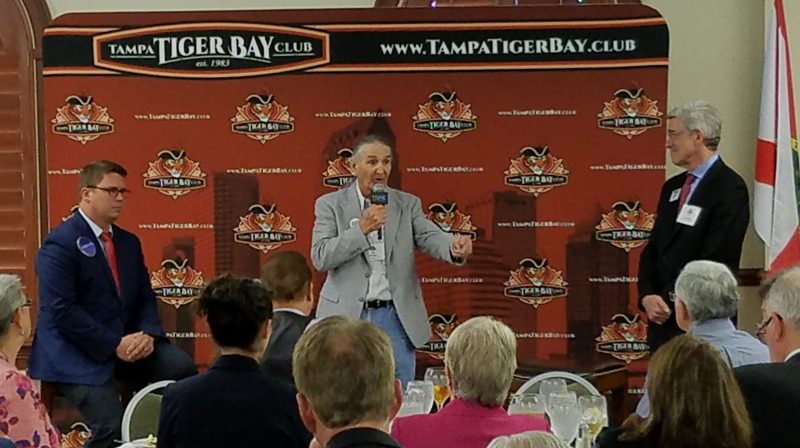 Tampa-area Democrats and two independent candidates for a State Senate seat continue to criticize the Republican in the race for being a no-show; Republican state Representative Dana Young skipped a Tiger Bay Club of Tampa debate Friday because of a funeral. But former Democratic gubernatorial candidate Alex Sink called Young out in a question to the other three candidates saying she had just come from the same funeral.

“So, I’m incredibly frustrated about the idea that there’s another candidate in this race, who refuses to stand up in front of the people. I just came from Mrs. Ferguson’s funeral, I’m here and I’m, until 2-o’-clock, there’s a reception and I’m going there too.

“So, this is my question: You all have been out talking to voters in this district. What are you communicating with them? How do you communicate with them that we have another candidate who feels entitled that she doesn’t have to show up and because she has the most money, she thinks she’s going to win?”

“So, buying an election, right? That’s pretty much what it comes down to, for at least the Republican party, in this one. I find it interesting that this seat pays about what I make as a staff sergeant in the air force. So, for me it’s an even trade. Right?

“But, yet the Republican party is willing to put a million dollars into what is normally considered a $250,000-$300,000 seat? That’s pretty telling.

“We’ve been around the block. I’ve gotten to see these gentlemen quite a few times because– I gotta say, I mean, they’re hard workers. I’m a hard worker. We are out every chance we get. I mean I’ve got a full time job trying to protect the nation, so I don’t get out as often as these two guys, but, when I do, we’re out here talking to people trying to tell them about why we want to help them. All we hear from that camp are crickets and maybe some very, very large mailers that I have to imagine are extremely expensive.”

“Dana Young’s record is extreme. I’ve given you some examples and believe me, there’s lots more. She does not want to face an audience, like this, and try to defend a record that is out of sync with our district. So, this is her first strategy, she’s not going to show up. As I said, this is not the first time, this is the sixth time she hasn’t shown up. The second thing she’s gonna do is pretend she didn’t do it: ‘I didn’t really do that stuff.’ Well, she’s caught. The third thing she’s gonna do is attack me personally. Try to hurt my rep– crazy stuff.

“One correction: I think they’re heading toward $3-million dollars in this race.

“So, yes. When I’m talking to voters, I’m explaining this is my side. If you’d like to hear from Dana Young, feel free, but, you’re gonna have trouble finding her.”

“They put out commercials telling you they’re taking care of the environment and then getting fined $2-billion dollars for destroying the environment. We can’t listen to them. Dig down deep, find out what’s really going on.”

WMNF left a voice mail at the campaign office of Dana Young but has not gotten a response.

“What’s interesting is I’ve been alive 63-years, on this planet. They’ve researched the heck out of my background. I have a wonderful, stellar, record in this community. Since they couldn’t find anything real, they’re making it up.”

“Well, the important responsibility is with Dana Young to be honest and have integrity.

“When public officials, like Dana Young, lack integrity, that’s a basis for not supporting them.

Should there be equal time or should the ads be pulled? What’s the remedy?

“The election laws in Florida are so lax, in so many different ways, that the remedies are few and far between.

“I think the voters of District 18 are pretty worldly, they’re pretty smart and they’re gonna figure this out and it’ll be fine.”