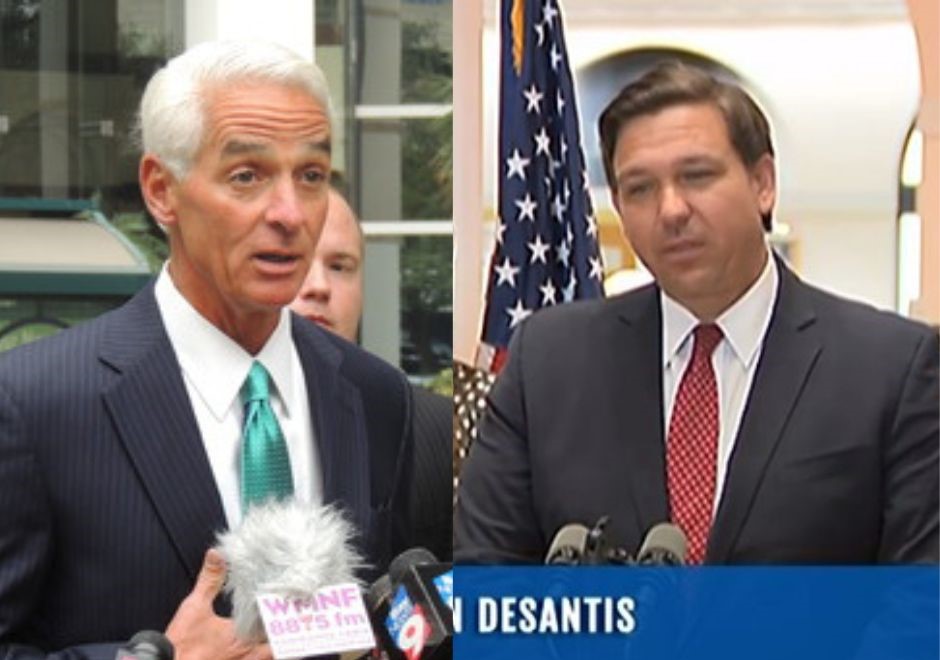 Florida’s Republican Governor Ron DeSantis and his Democratic challenger Charlie Crist faced off Monday night in their only debate before Election Day.

In the debate, DeSantis refused to commit to serving a full four-year term if re-elected. He also was silent about his future plans for abortion laws.

On WMNF’s Tuesday Café we heard highlights and got input from listeners about their reactions to the debate. We also asked about what questions that were not asked by the moderator should have been asked.

Watch the debate on C-SPAN

Here’s the News Service of Florida’s take on the debate:

DeSantis tried to make the debate a referendum on his first-term performance, claiming victories on how he’s handled the economy, education, COVID-19 and, lately, the response to Hurricane Ian.

But during back-and-forth before a boisterous crow at the Sunrise Theatre in Fort Pierce, Crist argued that DeSantis has emphasized divisive culture-war issues, used his position to remove political opponents from office and focused on a potential 2024 White House run, while costs of living — from rent to insurance coverage — have gone up.

“You don’t have the temperament to be kind and decent to other people who don’t look like you, who don’t act like you and don’t contribute to you,” Crist said while arguing over DeSantis’ opposition to providing treatments for transgender youths.

DeSantis, as he’s done on the campaign trail, hit at President Joe Biden’s economic policies that have been backed by Crist, a former Republican governor who later was elected to Congress as a Democrat.

WPEC television anchor Liz Quirantes, who moderated the debate and used questions submitted earlier from the public, unsuccessfully admonished the audience that continually cheering the candidates’ responses was cutting into the one-hour debate.

Susan MacManus, a retired political-science professor at the University of South Florida, said after the debate she didn’t expect it to alter the decisions of many voters as the Nov. 8 election nears. More than 1.16 million Floridians had already cast vote-by mail ballots Monday, as early voting sites opened in 37 counties.

“People want fixes,” MacManus said. “When people are looking at the debates right now, they want to hear what people are going to do to fix problems.”

MacManus said DeSantis might have offered more solutions because he was able to talk about current issues, while Crist had to remind people of his time in office. Crist was elected governor in 2006 and served one term before unsuccessfully running as an independent for U.S. Senate.

The debate was delayed two weeks because of Hurricane Ian. DeSantis has appeared frequently on television to discuss recovery efforts, while the hurricane caused other candidates, including Crist, to temporarily dial back campaigning.

Outside the theater, hundreds of DeSantis and Crist supporters paraded in the hours before the debate, raucously cheering their candidates and jeering the opponents.

DeSantis has led in polls throughout the campaign and has a huge fundraising advantage. Crist and other Democrats have focused heavily in recent months on abortion rights, after the U.S. Supreme Court in June overturned the landmark Roe v. Wade decision.

“He used to support a federal constitutional amendment that outlawed all abortion, regardless of any type of exceptions. Now he’s taken the other extreme position,” DeSantis said. “The question is, is this an honest change of heart or is this a guy that’s going to shift with whatever when he needs to try to keep his political career alive?”

Before the Supreme Court decision, DeSantis signed a law that prevents abortions in Florida after 15 weeks of pregnancy. During the debate, Crist argued that DeSantis and the Republican-controlled Legislature would go further in limiting abortion rights if DeSantis is re-elected.

Crist also questioned DeSantis’ directives before Hurricane Ian, which has killed more than 100 people, and DeSantis’ positions during the COVID-19 pandemic. He contended that DeSantis’ positions, which have included opposition to mask and vaccination requirements, have resulted in thousands of needless deaths.

“Ron, I wouldn’t pat yourself on the back too much about your response to COVID,” Crist said. “We’ve lost 82,000 of our fellow Floridians. And when you look at the Thanksgiving table, one of those empty seats is probably one of those people for many families watching tonight. If we only had the standard of other states in the United States, 40,000 of those people would still be alive, enough to fill Tropicana Stadium in St. Petersburg.”

DeSantis defended steps such as reopening the economy earlier than other states during the pandemic, saying a longer lockdown would have ravaged Florida businesses.

“Our hospitality and tourism industry, which has thrived, would have gone into disrepair,” DeSantis said. “It would have thrown millions of Floridians into turmoil. And I can tell you as Charlie Crist and his friends in Congress were urging you to be locked down, I lifted you up. I protected your rights. I made sure you could earn a living.”

The two agreed a Broward County jury should have recommended the death penalty for Nikolas Cruz, who killed 17 people at a Parkland high school in 2018. The jury this month decided that Cruz would serve life without parole.

Both candidates grew up in the Tampa Bay region: Crist in St. Petersburg, DeSantis in Dunedin.

DeSantis entered Congress in 2012, where he was a founding member of the conservative Freedom Caucus. With backing from then-President Donald Trump, DeSantis won the Republican nomination for governor in 2018 and narrowly defeated Democrat Andrew Gillum in the general election.

Crist was a Republican when he was successively elected as a state senator, education commissioner, attorney general and governor. After losing the 2010 U.S. Senate race, he became a Democrat and ran unsuccessfully for governor in 2014 against then-Gov. Rick Scott. Crist won a Pinellas County congressional seat in 2016.