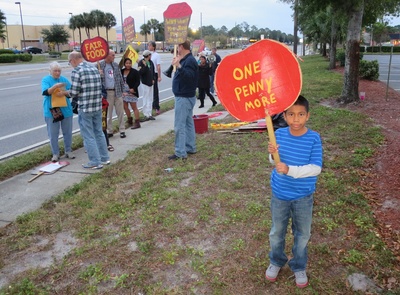 Migrant farmers join forces with social justice advocates to demand fair wages and treatment of migrant workers. Saturday evening people protested along the sidewalk in front of a North Tampa Publix. The demonstration coincided with the national theatrical release of the documentary Food Chains. The protesters chanted and waived signs until put them down to go to the documentary screening.

There were about 30 people at the beginning of the protest but that number swelled to nearly 60 as the sun began to set. They were there to raise awareness of the social, economic and working conditions of migrant farmer workers; most notably Latin Americans; that were depicted in the new documentary “Food Chains.” Joe Parker is a member of the Student/Farmworker Alliance. It’s a student advocacy group which works closely with other farm-worker advocacy groups. He said Publix could easily make a difference in an industry wide coalition which is already in place.

This push for reform isn’t new. The Coalition of Immokalee Workers, the CIW, has been at the forefront of worker-based human rights since 1993. These farm-workers and their partners have been campaigning for over 5 years to get Publix to join the Fair Food Program. The documentary “Food Chains” points this out. Brian West, Media and Community Relations Manager for Publix, gave a written response about the documentary to WMNF. It reads:

“The documentary, “Food Chains,” does not accurately portray Publix, the suppliers we partner with, or the working conditions of the people who pick the tomatoes that are sold in our stores.”

The Florida Health Department estimates that there are between 150,000 to 200,000 seasonal and migrant farm workers including their families who annually work in Florida. Silvia Perez is one of them as well as a member of the Coalition of Immokalee Workers. Translated by Joe Parker, she said she is hopeful Publix will do the right thing and pay the extra 1 cent.

Harriet Ha-Sidi, has been working with the CIW for nearly 20 years. She made the drive from the protest to the movie theater. Morally, she couldn’t support the stance taken by Publix. So, she quit shopping there. She encourages others to let Publix know how they feel.

Chuck Siegfried was at the protest and also made his way to view the documentary afterwards. He is on the council for social justice at the Unitarian Universalist Church in Clearwater. Siegfried’s day job is a corporate purchasing manager. He doesn’t see the long term financial worth in not paying the extra penny per pound of tomatoes.

The documentary “Food Chains” is in theaters now.