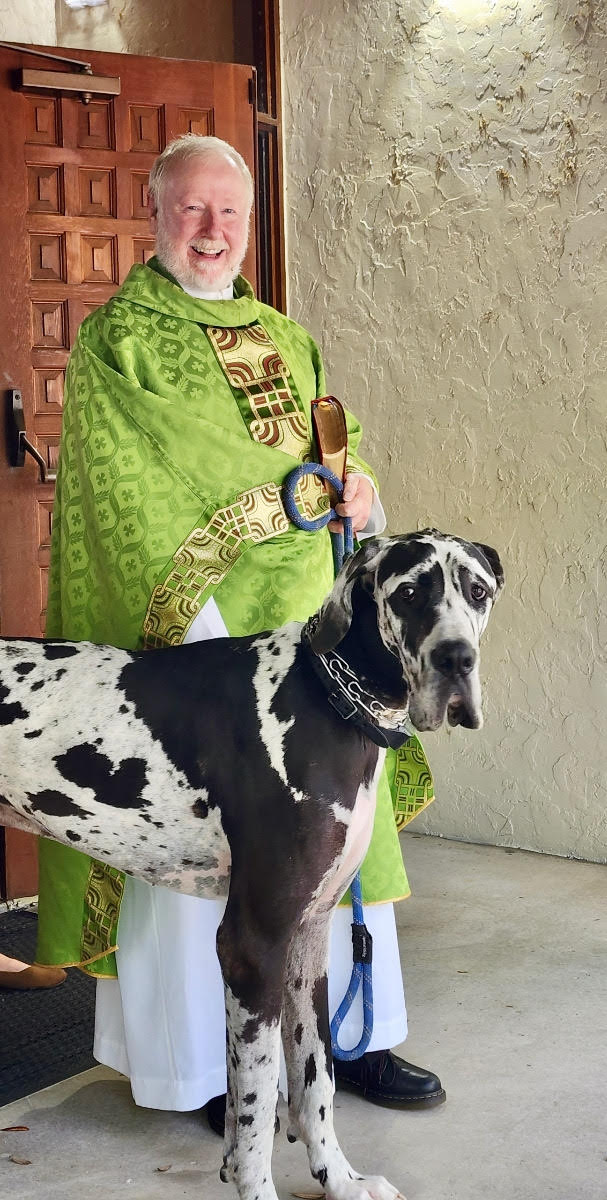 Father Andrew rattles of the string of dogs he’s lived with, all of whom have names ending with the “y” sound—except his present canine companion, Winston, a literary luminary in St. Clement’s circles: He writes a monthly column for the parish magazine, “Words of Winston.”

Father Andrew remarks that he’s always been accompanied by a dog at all the churches he’s worked, noting that his clergy colleagues rarely did the same—it was far more common for them to live with cats.

As a lifelong pooch person, he outlines what, exactly, a dog does for him, how that dog—Winston, presently—makes his life better, later pointing to another, more professional virtue: parishioners seeking Father Andrew’s counsel about a serious problem, grief, perhaps other difficult issues, often find it easier to open up by speaking to Winston, akin to how courthouse dogs help a child victim of abuse testify.

We discuss the-then forthcoming Blessing of the Animals, set for Oct. 1—the 35th year the ceremony has been offered by the 60-year-old parish—and how different the 2022 version was likely to be, after two years of limitations required by COVID protocols.

Beyond everything being in person, this year’s Blessing was to be marked by another wrinkle: offering food! St. Clement’s presented a free picnic for all attendees, and some of those attendees were slated to be rescue groups conducting pet adoptions.

On a related note, we touch on the church’s newly-launched People and Pets Ministry, which seeks to keep people and their pets together, even under highly trying circumstances, including providing pet food and some veterinary care to at-risk families.

We examine yet another recently-introduced St. Clement’s service—literally—the Pet-Friendly Sunday, which lands on the third Sunday of the month, affording people the opportunity to worship alongside their pets, at two services that morning. At this rate, it probably won’t be long before St. Clement’s allows a dog to deliver the sermon. My money’s on Winston.