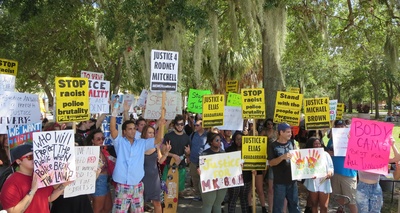 Some citizens of St. Petersburg are outraged the at the militarization of the city’s police and systemic racial inequality. They gathered in peaceful rally Saturday to show solidarity with the people of Ferguson, Missouri. The protesters’ contempt for police injustice isn’t a question of better police public relations; it goes much deeper.

Issues like ethnic injustice and inequality have reverberated around the country following the fatal shooting of Michael Brown in Ferguson, Missouri. Some perceive law enforcement as the legitimized extension of an even larger corrupt system. Benjamin West, co-organizer of the rally, got involved, initially, for personal reasons.

“The way the police force has been acting in the last couple of months; we’ve noticed that there’s been a lot of deaths of people that are unarmed and have been killed by the police…Multiple times in the past year. The first time I got enraged over this is (when) my best friend Jared Speakman was shot and killed by a police officer two years ago. From there it’s kinda escalated into me wanting to organize a protest for the demilitarization of the police force along with the institutionalized racism within the police force.”

Alicia Anderson, another co-organizer, is keenly aware how the color of your skin either works for you or against you when dealing with law enforcement.

“I mean; just being a white girl I have gotten away with so much more. If I were a black male I would have been in jail, like 5 times. So, definitely as a white female I see it a lot. I get let go a lot easier and I know it wouldn’t be the same for someone of color.”

Unlike Ferguson, the St Pete police department has 5 African-Americans in the top 20 positions. This representation nearly equals the 24% African-American population of St Pete recorded in the 2010 US census. Carla Bristol, logistical coordinator of the rally, was adamant that those statistics don’t address the core problems.

“You can’t eradicate today what has been developed and built up over time. So that’s one. Two, what I’ve observed, this is just as an outsider and as a citizen, is that you have a police department with a history of this brotherhood of protecting each other. They have probably one of the strongest bond. So, it’s really like a gang, truly, but with the power to do and to cover what they’re doing. And we’re just saying: be accountable.”

A study from the Department of Justice shows that black men composed 28 percent of all arrests during 2003-2009, but composed 32 percent of all deaths during an arrest. Ali Muhammad, student minister at Muhammad Mosque 95 in Tampa, is convinced systemic racism devalues the lives of the black community.

“And the kill-shot, that caused the bullet to go through the top of his (Michael Brown) head and come out his eyeball, was a sign…that there’s a move within the higher centers of power in this country….that (says) since there’s no more use for black people as it relates to giving us justice. Their plan is telling us, and we are convinced, that they want to cull the black community. And black youth is considered an endangered species.”

A culturally diverse crowd made up the nearly 150 people at the rally in Williams Park. Some at the rally also were protesting against drug related injustices. According to the ACLU during the last 10 years, arrests for marijuana possession have gone up 11 percent while a racial disparity in marijuana arrests has gone up 15 percent. Olette Cameron, a resident of St Pete, reflected on the fact that she might have been racially profiled.

“I think the only times I’ve ever been pulled over, was in a lower class part/area of the city. Which means there’s more cops; there’s more…you get pulled over for nonsense. And I don’t know what that is about. But there’s definitely something to that.”

The rally was conducted without incident.