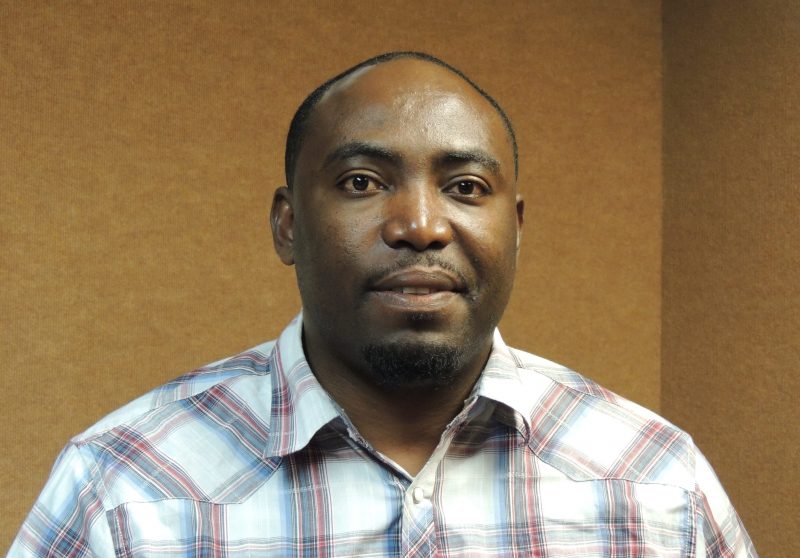 As many as one thousand people are believed to have died when Hurricane Matthew slammed into southern Haiti last week. So a Haitian relief organization with ties to the Tampa Bay area is trying to assist the thousands more who are facing a humanitarian crisis. Daniel Thelusmar is president of Caribbean American Civic Movement. He says that affected areas are so remote and isolated

that shipments of food and supplies will take too long to get to the people who need them the most, so he says its best to make a financial donation. We also hear about the need for volunteers in Haiti, especially for doctors, nurses or engineers.

“The hurricane hit Haiti last week. We have a preliminary assessment from the government–we don’t know yet. Now, there is at least 1,000 people reported died and more people are gonna keep coming out, as we getting access to the affected area. We had more than 1,000,000 people, actually, homeless, throughout Haiti.

“What happened: the city of [Les] Cayes, which hit the most, it is below the sea level. Anytime there is anything, it just covered the entire southern part of Haiti, because of how the city is built. It’s too close to the sea and sea is higher, really, than the village and everybody know that, every year. This area was already damaged from previous hurricane. The road and infrastructure was already very bad and it has been like that for years.

“Now, when Matthew hit, it just destroyed everything. Some of the people, also, they were not prepared. The readiness for the hurricane was not really played very well, also. Like, for example, my Grandma: she is 86-years old, she is living very close to the sea, in a small house. Nobody went there to tell her– she didn’t even know there was a hurricane coming until my cousin decided to go there and pick her up and she hurt her arms by trying to rescue her.

“So, that’s what’s happening in Haiti right now. There are aids coming to Haiti, but, the aid is actually stuck right in [Les] Cayes and Port Salut, which is where they have the main access to the road. But, Chardonnieres is totally destroyed, there is no way to get to them. The city of [Les] Cayes, the Mayor tell me, Gabriel Fortuné, they are already reported 249 dead–just the city of [Les] Cayes.”

What are the things that the people there need the most?

“Caribbean American Civic Movement: we sent a team from Dominican Republic to the area. Right now we have an engineer: Engineer Aladin(sp), he’s a civil engineer. He’s there assessing the area too– because if humanitarian aid cannot get to them, so there you will send stuff that will just sit there and not getting to people, just like what happened in the earthquake in 2010. So, we want to open the main road to get access to the deep, deep side of the area, because if somebody is like my grandma–86-years old–you cannot run, you basically cannot walk, your health was not already good, so we have to get to you. That’s what our engineer is doing: open the road, we doing water distribution. Cholera is still in Haiti. The cholera, unfortunately, is still deeply in Haiti. Now, what’s gonna happen, this water–the mudslide–that gonna spray those viruses Zika and cholera throughout the entire south. The south was not bad because Zika was mostly in the centerville and cholera. Now, it’s gonna go all the way in the south. So, what we’re trying to do is clean water. We’re trying to distribute clean water from [to] them and also move everybody to a safe zone. That’s what our firemen are gonna be doing when they reach there. Move them to the safe zone, providing clean water, milk for the kids and dry food for them to hold them together.”

What can people, here in Florida, do to help the people in Haiti. “Basically they can go to our website. Go to www.makeadifference they make a donation directly to that and 100% of that money is going to Haiti. Even myself, I’m flying there, I just decided to be a Uber driver so I can raise my funds to go there–it’s coming out of my pocket.

“What’s really saddened me is because I go around and talking with different churches and asking them for help, what I get: ‘they already send the help.’ “Send the help.” What does that mean? They raised stuff, send it in a container to Haiti, but what happened? The container sit right there in the customs and it’s gonna take at least 2-3 weeks to get to Haiti. Now, when it gets to Haiti, it’s gonna probably take another 2-3 weeks to get to the affected area and now you’re gonna have to deal with the local government, also, with the bureaucracy to get there. That’s why we get our team in there and positioned in place and taking control of the city with the government so whatever we have it’s flowing right to the people, immediately, instantly.”

So, what I’m hearing is that there aren’t products that people can send, like sending water or sending food; that you think that, really, the only way to do it is to get donations of money to the people on the ground there?

“On the ground there. Because, what happened, like, my long term goals: we gonna have to get those people back to their garden. Because that’s whats the [Les] Cayes– the [Les] Cayes is very known for rice, they are very known for coffee, actually, they hold the country together when it comes to coffee, and all those plants are destroyed.

“We have specialists, actually as I’m talking to you right now, on the ground in [Les] Cayes, trying to see how we can bring them back their garden. That’s why our engineers are gonna clean the road, go back to the land, you know, give them confidence.

Is there a shortage of food in Port-au-Prince or Dominican Republic? With the hurricane putting more demand there, would that hurt the food situation?

“Of course, yes, because all of our food are from the Port-au-Prince. Port-au-Prince is feed off of the countryside and [Les] Cayes and Cap-Hatien, they are the main world, the entire southern region. That’s what feeds Port-au-Prince with rice, beans, black beans, mangoes, and coffee and cocoa. The country, they’re gonna have a shortage of food. That’s why we have to take long

terms trying to get them– I know, like throwing some rice at them is good, but, we need to get on the land, get them back to the land so when that shutting off of food comes, they can be ready for it.”

“As a matter of fact, yes, we are. That’s one of the reasons also we push the insurance–general liability insurance–for our organization, so we can cover people’s trips, like that when people are traveling with us. We welcome doctors, nurses and we welcome even civil engineer, that want to go down there and help us assess the situation, so we can have a plan in place. Because one of the biggest mistakes that, actually I made too, that everybody made is that we pump up so much money to Haiti after the earthquake, but, we didn’t went down there and structure things and change these people’s life. Haiti have a big infrastructure issue that [we] must fix. If we don’t fix that, if we don’t go on the ground, build those people preventing– because, we have to be ready for this. Every year a hurricane is gonna come. So, we have to fix this problem, to its core, not just throwing a bunch of food at it, and take a few pictures. We have to go there, study the situation, fix it.”

“Actually, that’s funny, I was just talking to some friends about that. I was in Haiti after the earthquake and everybody in Tampa know[s], because I was in the news. St. Pete Times come in and cover us. Tampa Tribune come in to cover us. The Ledger come in and covered us. I spent 3 months there and my story was even published in the Reader’s Digest.

“I had a chance to see those organizations in action. One of the thing that really destroyed my heart: I got to Haiti, probably 3 days after the earthquake and I was in Dominican Republic, me and Mike Counic(sp). All those big organizations, they were just there at the border and taking pictures and doing a bunch of stuff. Even the rescue mission, they are just right there at the border. I’m saying: ‘Hello! People are not dying at the border. People are dying in Port-au-Prince. What [are] we gonna do to get to Port-a-Prince?’

“Chief Goldberg, he have a big organization. His name is Fred Goldberg. He was very upset and he said: ‘Well, you know what? If you guys are not going, Daniel, let’s make it to Port-au-Prince.’ So, we get a car, on our own. It was very dangerous. We go straight to Montana and we start pulling out and they follow us, a lot of them followed us. We start working with Love A Child.

“The thing is most of those organizations– I’m Haitian and it saddened me, because I feel like sometimes they use whatever disaster we have, just to raise funds for their organizations. I know all of the organizations have their own agenda.

“My problem is I can criticize them all day if I want to, but, the main thing is us, as Haitian citizens, we must take the destiny of our country, at hand. Especially the Haitian-American[s] that are living in here, in this society here. A lot of them are lawyers, doctors, engineers. Why can’t we come together and fix our country? Why can’t we do that? And those organizations, they can follow us, we can give them a plan. We say: ‘Ok, we need $10,000,000 to do this.’ And they can provide the money for us while we’re on the ground doing it. They can raise the money if they’re working in conjunction with us.

“Organizations like Clinton Foundation, Red Cross, they have a world organization. They have other prospectives. They cannot focus, just in Haiti, they have a lot of stuff on their mind. However they do whatever they do, is them.

“My main focus is I’m calling up on all Haitian-American[s] to get involved to fix your country. Like, I’m American too. I will fix my home. I’m not going to leave my family hungry. I’m gonna take care of my kids, but, I will do my part, also, for Haiti. You have to take care of your home. Like, Haitian[s], we have to take care of our country. If you can wait for big organization[s], we gonna wait for a long time and we have been waiting for 200 years.”