Home Blog News and Public Affairs Education Florida immigrant tuition bill is a victory for advocates, but not entirely 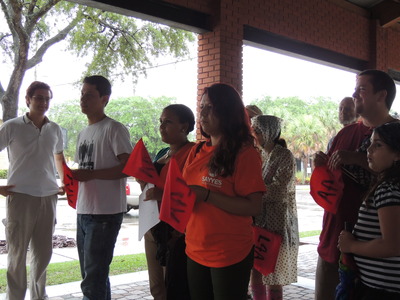 Governor Rick Scott signed a bill Monday giving Florida students who are undocumented immigrants the chance to attend a state university for the same price as their peers. The bill provides waivers for in-state tuition so they don’t have to pay much higher out of state rates.

The bill also freezes tuition rates at Florida public colleges. The Governor is highlighting his commitment to low tuition during his re-election bid against likely opponent, Charlie Crist.

WMNF interviewed Chrisley Carpio, a member of Students for a Democratic Society at the University of Florida. She’s celebrating the Governor’s approval of the bill, with caveats.

“It is a watered down version of what we were originally fighting for which was because they added a few amendments, they’ve added a few requirements but most importantly they’ve left the amount of waivers to the discretion of the board of each university which means that there’s no accountability for how many waivers are going to be at each university. For all we know it would just be a few. So the same way that we know we are going to have to fight for these waivers on our campus, we’ll have to fight to continue defending the waivers and making sure the bill get implemented correctly at each university. So while students are very pleased we know that the fight for tuition equity is not really over, not even with the bill.”

Tell me about some of the watered down amendments that happened throughout this bill’s passage. What are those and why are they troubling?

“I would say there are probably about 3. There’s one the puts a minimum of how much time you have to be, you couldn’t be out of school for like a certain amount of months. I can’t remember the number of months but it’s troubling because most undocumented students have, like they couldn’t go to school completely uninterrupted. A lot of them had to take breaks to like go to work to support their families. So that’s one thing that limits the amount of waivers. Another important thing is the fact that you can’t hold the boards accountable for a certain amount. They can choose however many waivers they want to give out. I know that one thing that happened when we were fighting on each campus, particularly at UF was that the board instead of () towards some equity would try to suggest to us like why couldn’t we be satisfied with scholarships and what not. The problem with scholarships is that only one or two students could receive them. And then, three, the most troubling thing is it specifically prohibits undocumented students from receiving financial aid from federal institutions whereas that language never existed in the bill before. So that is extremely troubling. Think of how difficult it is for a student who has documentation to go to university, it would still be very difficult for undocumented students to go as well. They would need to receive financial aid money and this bill prohibits that.”

So this doesn’t go as far as you all would have liked it to have gone but it is a step in the right direction. What happens now that this has been passed? Are you going to continue the fight to maybe see another bill introduced next session to broaden the provisions?

“What’s actually happening is UF and other Students for a Democratic Society chapters are working on this in a national campaign which we call ‘Education for All’ with other affiliate organizations; () at UF and AIR at FSU and () Tuition Equity at USF. The national Education for All campaign includes groups from other states who are fighting for a variety of things to make higher education accessible to undocumented students. Such as, like in Tennessee undocumented students can’t attend the university at all if they don’t get admitted. Mostly we’re fighting for tuition equity in states where it’s never happened before. An important thing coming up is that some universities in Arizona already have tuition equity but they’re facing possible repeal or possible negative repercussions.”