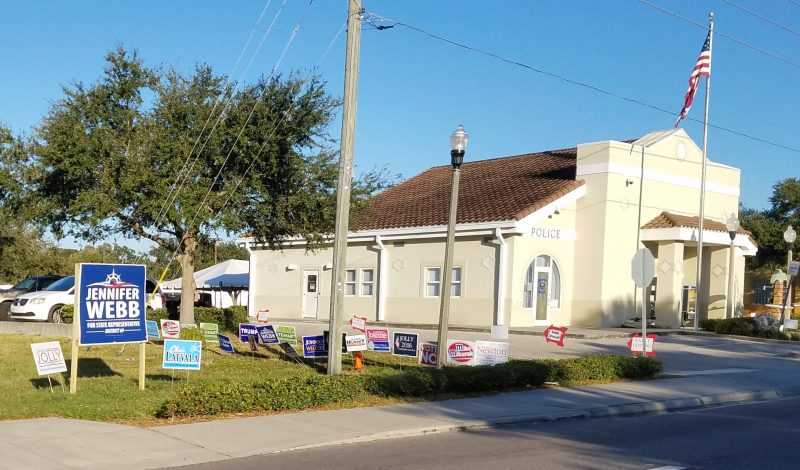 A man in East Tampa almost gave up before voting this morning after being told he wasn’t on the rolls; after more than an hour, Virgil Campbell was able to update his address and vote at the Fair Oaks Park Community Center in East Tampa.

“So, they sent me out of the center, I couldn’t vote. So, I came back and then the lady, right here, she stopped me and told me she checked to see if I was a registered voter and I was, but, it was in Pasco County. But, I told her my sister changed my address with her, when she moved. So, I said I’ve never been to Pasco County, but, my mailing address was changed back here.

“I went back the second time and she told me you can do a provisional ballot. I said I don’t have time to do this, it’s a long piece of paper. This lady, she came and she talked to someone from the election place and they called her and I got to vote.”

How long did the whole process take?

And you were about ready to give up until you got help?

“Right. I was about to give up until that lady over there, she said I’m gonna get you to vote and I hung around.”

So, how does it feel to vote?

What would you tell people if they’re having trouble? They think they should be able to vote, but, they’re getting some bad information, they’re saying…

“They should call the county election officials or find someone that can help them and get it checked out, because you have the right to vote.”

And finally, do you want to tell anybody who you voted for or why?

Laila Abdelaziz works with the Council on American-Islamic Relations of Florida. She’s also a board member at WMNF. Today she’s part of a voter protection effort in Hillsborough County.

“Well, we have noticed a couple of themes. You know, we noticed people that come up to vote, that aren’t registered to vote, obviously, we have to turn them away. But, we did have an individual, a gentleman today, that was eligible and registered, but, he just had to do a simple address change.

“So, we were able to get him the help that he needed and it took some time, it took about an hour and a half, and this gentleman is now late for work, but, he was finally able to cast his ballot.”

What someone should do if they’ve moved, is go to the precinct, where they live now and just do a same day change of address and that’s completely fine? Even if the poll worker tells you that’s not fine, you just be persistent and maybe call the Supervisor of Elections?

“Correct. Call the Supervisor of Elections if you’re having that issue. There’s also a non-partisan voter protection hotline.”

The Hillsborough Supervisor of Elections, Craig Latimer, says that as of noon Tuesday, voting was robust.

“So, we had people lined up, ready to vote, before they went in to work or started their day. So, we’re seeing a really nice turnout. We’ve had a absolutely great early vote and vote by mail. At the end of early voting, on Sunday, together with vote by mail, we’d already voted 425,000 voters in Hillsborough county, which is just a great number.”

Out of a total of about how many?

Have you heard of any major issues this morning in Hillsborough?

“No. You know, we’ve had the minor: the machine jammed. We un-jammed it. We have had a couple of lines at places because people did show up, like I said, right before work. But, we’ve also seen that fall off, quite a bit. As a matter of fact, I know that earlier I was looking at it and we were voting, you know 25,000 an hour and it’s totally dropped off now to under 12,000 an hour. So, in half of what it was when we first started.”

I spoke with a gentleman in east Tampa, who was originally told he couldn’t vote, but, after a call to your office, I believe, it was recommended that he update his address and then he was able to vote. What would you recommend to people if they’re told they’re not on the voter rolls? What are some things they can check for?

“Yeah, Sean. I saw that video and I gotta tell you, at first, there, I thought it was an episode of ‘Who’s on First?’ Because the gentleman, you know they said our records show you’re in Pasco County and he just wanted to argue that he had never lived in Pasco County and then ultimately he found out his daughter or somebody, changed their address to Pasco County and there was a lot of confusion there.

“But, if somebody goes into a site and they can change their address– you can change your address, on election day, at a polling site. So, make sure you’re in the right polling site. But, at most, you should vote a provisional ballot and then we can get it straightened out, when we get it back here.

“We would just encourage people to try to communicate. Have the opportunity to change your address, if you want or you can vote a provisional ballot at that time. But, you know, our poll workers are trained pretty well, that the first thing we’re going to try to do is redirect somebody to the appropriate polling site, so that they vote a regular ballot and it counts.”

What happens if you vote a provisional ballot and you happen to be in the wrong precinct when you do that? And so you’re ballot might be a little bit different than where you were supposed to have voted?

So, make sure you vote where you live.

“That’s correct. And you’ve always got the opportunity– you know, you can update your address on election day, at the correct polling site.”