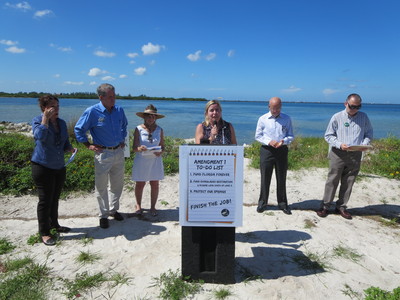 Florida citizens are demanding state legislators uphold their duty and pass a budget to properly fund Amendment One. Saturday afternoon in Tampa and across the state, conservationists, advocacy groups, residents and local politicians rallied to put the Water and Land Conservation Amendment funding on the top of legislators minds.Florida House Representative Dwight Dudley thinks the unwillingness to fund Amendment One smacks of betrayal and tyranny.

In Tampa’s Cypress Point Park more than 100 people gathered to protest and send a message to the Florida legislature. The beachfront park on the bay is also in the flight path of Tampa International Airport. Crystal blue waters and cloudless blue sky were periodically contrasted with planes flying overhead. Dwight Dudley, Florida House of Representatives Democrat representing the 68th district, said Tallahassee lawmakers need to start acting like elected officials.

The legislature reconvenes Monday in a special session to pass a budget. 75 percent of the voters representing 4.2 million people passed the amendment, which is still underfunded. Government funding is what helped preserve wetland areas like Cypress Point Park. Tampa City Council member Charlie Miranda reiterated how important water is to Florida’s future.

The event in Tampa was one of nine held throughout the state. Residents and vacationers looked on as they enjoyed the park beachside but didn’t join the rally. It’s the water and wetland preservation which underscores the interconnection of diverse areas of Florida. Darden Rice, St. Petersburg City Council member, said Saint Petersburg residents have a vital interest in wetland conservation elsewhere in Florida.

High on the to-do list from advocacy groups is having Tallahassee lawmakers allocate the $300 million towards Everglades restoration and natural springs protection.