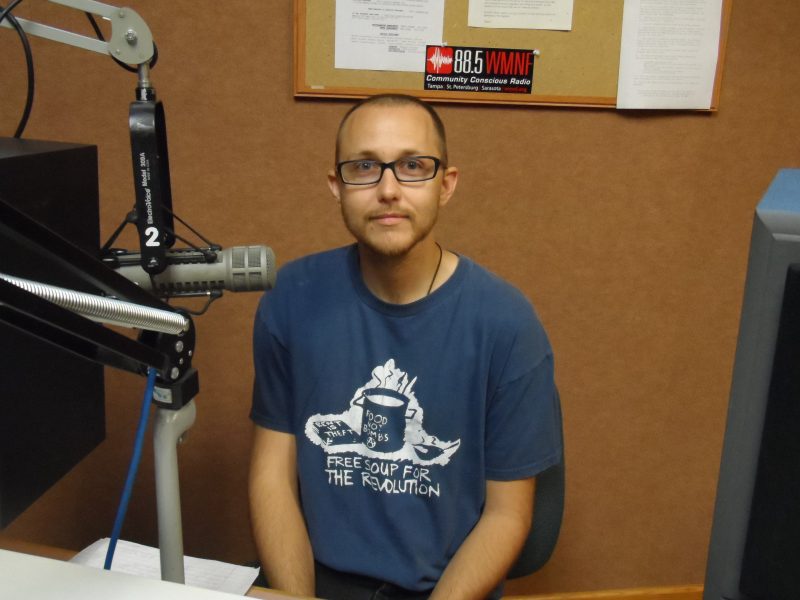 A young homeless man faces a pretrial hearing tomorrow in a Tampa courtroom. Members of a local peace group are calling on people to pack the room to show support for Ashton Stotter. Jimmy Dunson is a volunteer with Tampa Food Not Bombs.

“Stotter, he goes by “Compass,” he was a friend who we at Tampa Food Not Bombs shared food with. And he was beaten by police. He was punched in the face, in the ribs, he was put in handcuffs and then taken down and slammed to the ground multiple times. Charged with resisting arrest with violence and then also the original charge was petty theft. They said that he stole a sandwich from a 7-11.”

But, he had been cleared, earlier, on a different charge for stealing?

“So, actually what happened was he was arrested in January/February, beginning of this year. Then he went to one trial already and he won that trial. He insists that he did not do any of this. He sponges for money, he plays guitar for money, sometimes dumpster dives for food and he had $6.00 in his pocket. And if he wanted a pizza, he would have bought a pizza. But, they said that he stole this and he affirms his innocence.

“They keep trying to make him plea out–make him plead guilty. And he insists that he doesn’t. So, he’s been in there–staying in jail for 5 or 6 months now and is coming up to his pre-trial on June 21st. It’s a Tuesday at 8:30 a.m. in Judge Holden’s court, in Tampa. And we at Food Not Bombs want to support him and raise awareness about his case.

“So one thing about how it came about was some Tampa Food Not Bombs volunteers did jail support for Black Lives Matter activists. We had Affinity Group support forms and then supported people when they’re in jail, in whatever way we could, help bail them out and things like that. Then we thought we could do this same approach towards people that we share our food with, who often times we go a couple weeks and ‘hey, we haven’t seen this person for a long time. I wonder what happened?’

“In the past, we didn’t have their legal name and didn’t know how to find them in the system. So, we started bringing these Affinity Group support forms to our Tampa Food Not Bombs sharings and asking people who are willing to, to sign and to say their legal name–their identifiable information. This has helped us to find Ashton.

“There was actually another woman that was just recently arrested and I sent a postcard to her today and hopefully [I’ll] get correspondence with her as well. This allows us to find them in the system and support them through “I-Care packages” or emotional support or even–like we’re trying to do here–show up to the court hearing and just make him feel not alone, even though he’s behind bars.”

Is there anything else about this case or about this issue that our listeners should know?

“Yeah, I actually wanted to read an excerpt from a letter that he wrote me, from jail. We’ve written back and forth a few times. I can only send him postcards, due to the way Hillsborough county jails work. But, this is from Ashton, or ‘Compass:'”

‘Unlike a lot of people I’m locked up with, there’s a lot of inmates in here facing Life or the death penalty. I think that’s the hardest about being in here. I feel like I’ve been doing life in an installment plan, only I hop freight trains all over the country, just trying to be free and pursue my happiness, then get locked up everywhere I go. It’s not fair that an American should feel like a P.O.W. in his own country.’

“This isn’t the first time that Ashton has been locked away, for long periods of time even. I think it’s an indictment of our economic system and obviously our “justice system.” Ashton has talked about it in his letters: if you’re rich enough, you can pay somebody–a lawyer–they’ll get it all cleaned away for almost nothing–fix everything and then bail him out so he doesn’t have to be in jail for 6 months over a sandwich. And then also he indicts the economic system: that food should be a human right–it should be accessible to everybody that needs it. That people are being arrested for something like stealing a sandwich is just absurd and shows what the purpose of the police are, in our society, to uphold economic inequality and suffering and that needs to change.”