Food & Water Watch released a report Wednesday called “The Fracking Endgame,” which criticizes natural gas exploration and blames it for pollution, making the climate crisis worse and increasing the abundance of plastics.

“This report is the first survey of the the extent to which the oil and gas industry, the petro-chemical industry and the electric power industry are building out fracked-gas infrastructure to raise natural gas prices. They’re doing this by exporting LNG, manufacturing more plastics, and building gas fired power plants.”

“Yes, liquefied natural gas. Once the gas has been fracked, they liquefy it by bringing it to a very cool pressurized temperature. This is a major point of the report that these industries are benefiting from cheap fracked gas. Right now the prices are the lowest they’ve ever been.

“So, what is happening is there’s an economic lifeline being thrown to the fracking industry, that’s going to probably increase air pollution, greenhouse gasses and plastic waste. And government policies are also propping up this pollution by giving these industries new tax breaks and subsidies and lax permitting while supporting continued fracked gas exploration and over production. And it’s a way for them to raise prices on this natural gas that they been over-producing.”

SK: Natural gas is in abundance right now in the United States and it’s one of the reasons why Tampa Electric is planning on converting one of its coal-burning plants in Apollo Beach to natural gas. You oppose that. Why?

“We oppose that because it encourages a fossil fuel future for Florida. Right now, as you mentioned, we have a surplus of natural gas. They’re actually flaring it — or burning it — out West because they have nowhere to put. It’s a losing operation and a losing venture the way they currently have it.

“But the second fracking boom has allowed the fracking industry to find a way to capitalize off of this overproduction, and that’s where they’re coming into doing this build out of increasing plants, like what Tampa Electric is proposing of moving to natural gas plant.

“They’re also increasing LNG ports so they can transport it overseas and building infrastructure projects, such as the trains that are pushing it down in south Florida, also known as bomb trains because they are highly pressurized they can explode, and have exploded around the country. And, it also is increasing plastic production.

“So we oppose this, because, instead of finding a way for these industries to capitalize on their bad investment, we need to be moving away from a fossil fuel future. And by allowing them to move forward with building out fossil fuel infrastructure like this proposed power plant, all they’re doing is locking that in.

“And, we’re looking at an endgame for our climate future. We need to be off of fossil fuel and on to 100% renewable energy by 2035. And in building this plant they’re just ensuring that the fracking and the natural gas production continue.”

“That’s a difficult question to answer because neither are good. It’s choosing between bad and badder. So coal, of course, is producing a lot more visible impacts to the community. But natural gas is also, including a lot of more unseen evils and pollutants into the communities.

“Fracking produces one of the most horrible of the greenhouse gases, methane. In Pennsylvania, they’ve seen, around where fracking is really popular in Allegheny County, they’ve had a boom there. The amount of childhood cancer has been increasing rapidly. We have low birth weights of babies that are born near fracking infrastructure. We’ve seeing groundwater pollution.

“Also, this proposal for this gas plant they’re wanting to build in Apollo Beach, they are also proposing to build up their seawall in order to protect this plant. So, they know that what they are doing is increasing the threats of climate change and sea level rise, and they’re protecting their investment.

“They are not looking for a transition to clean energy, and at the same time they’re causing a threat to the surrounding community because that water has to go somewhere. And if that seawall is in place, it’s being pushed into the communities around the plant, even though the plant, itself, might not be getting the impacts of the sea level rise.” 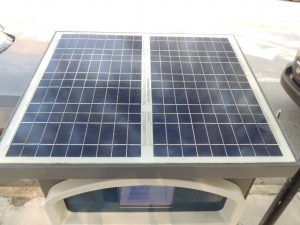 SK: On the topic of clean energy, TECO told the Hillsborough County Commission a few months ago that they were going to be investing in some more solar production. And one of the reasons that they were able to build more solar is because they were planning on having this natural gas plant operating.

“Well, we have had the ability to transition to 100% solar for over 20 years now. If they build this power plant and continue to give aid and a lifeline to the fracking industry, they have no incentive to build out solar. Now, they may do it on a smaller scale in order to make people happy.

“But financially, right now, with the increase they’re able to push forward, and prices from the cheap natural gas, and pushing that on to the pushing that onto the rate payers in the communities, they have more of an incentive to continue natural gas production and not move to the 100% solar power which is completely feasible and less expensive than building a gas fired plant. And also, overall better for the community and our future.”

SK: Is there anything else that people should know about natural gas?

“Right now, we need to move 100% renewables, off of fossil fuels. Building out infrastructure merely ensures the fossil fuel future. It’s a ticking time bomb that will neuter any efforts towards a Green New Deal. Any climate plan that doesn’t explicitly address infrastructure build-out by banning fracking is going to ensure climate chaos.

“Florida is ground zero for climate change. We need to not only to ban fracking, but stop supporting and throwing life-line to the fracking industry by allowing the projects to move forward.

“Right now, we have three power plants in Florida moving to natural gas. In Citrus County, in Hillsborough and in Broward. We have proposed LNG exports, port areas, and infrastructure throughout the state and in Jacksonville and Stuart. And then, we also have pipelines that have just been approved to be built.

“All this adds up to a future that doesn’t look very good for Florida.

“And we have a governor in office who claims to be an environmentalist, a ‘Teddy Roosevelt conservative’ as he says it. However, all of the policies that have been going through under his administration have not been looking like those that an environmentalist would move forward.

“We’ve seen just extraordinary growth in infrastructure because of the excess production of natural gas. It’s not to our benefit. It’s a losing venture. They’re trying to find a find a way to capitalize off it by pushing it on to us. Our climate and our future is at risk.

“So we strongly urge our governing officials to do something about this and stop it, because they can. And we urge all Floridians to reach out to their elected officials.”