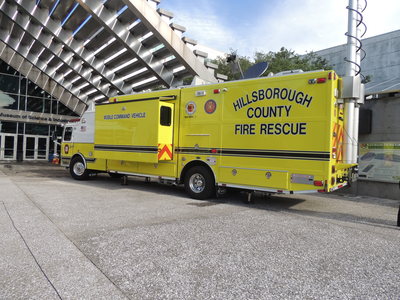 For the first time, emergency planners in Tampa hosted a hurricane expo in East Tampa Saturday. Oliver Greene with Tampa’s office of emergency management said the city wanted to make sure it reached residents who don’t often make it to the larger expo held every June.

“There’s other portions of the city and county that don’t always make it out that sometimes get overlooked or they sometimes just have challenges where they can’t make it.”

The expo was at the NFL YET Center in Jackson Heights. In that area, poverty is one of the biggest challenges not just for making it to hurricane expos outside their neighborhood, but for being prepared in general.

“We know that we have an older population here that we can reach out to. There’s a lot of churches in the area. Back in the day you had churches – that’s where a lot of people go to get information.”

Residents were given the chance to find out exactly what they need to do and have to stay safe in a storm. The American Red Cross offered a copying service for important documents. Jose Bueno, the community preparedness and resilience manager in Tampa, also handed out maps showing where likely shelters would be and which ones would be handicap or pet friendly.

“One of the most important things to remember in an emergency is to make sure that the families know where to go with seniors. Not only seniors, but citizens with disabilities. If you require special medications, there’s a special shelter that does that.”

Other groups had examples of supplies families should stock up on during hurricane season. Cate Hammer, president of the Greater Tampa Certified Emergency Response Team, suggests having a “Go Kit” ready. That would be a large storage container with the basics – water, flashlights, batteries. But there’s some other things she suggests throwing in most people probably wouldn’t think of.

She also recommends having backpacks for each member of the household.

Hammer also reminds pet owners not to forget their furry friends. Pets should have backpacks too with food and any necessary medications.