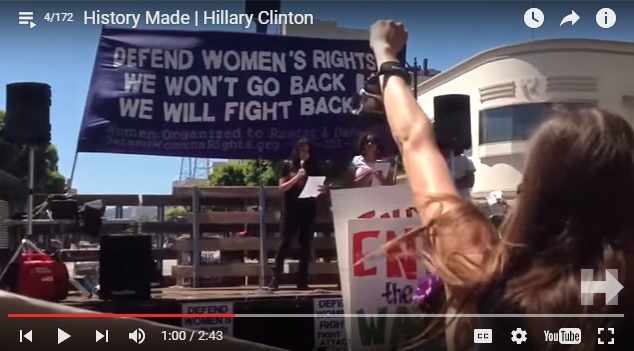 But a woman who ran for president four years ago with the Party for Socialism and Liberation says she’s furious that her image was used in Clinton’s video.

Peta Lindsay ran for president in 2012 and is the co-founder of Women Organized to Resist and Defend, or WORD.

Now Peta Lindsay is a teacher in Los Angeles.

“We realize that the politicians are not going to do the fighting for us. All of the rights that women have won, thus far, in this country, we’ve won through organizing and struggling for it. And so, we are an organization of women who have been activists in other struggles, who decided to come together and form our own organization to fight, in our own name and for our own rights.

“We have chapters all over the country. A lot of young women, a lot women of color. We do a lot of grass-roots organizing. Our slogan is “We won’t go back. We’re gonna fight back.”

As part of WORD, you were filmed at a rally in 2012, and part of that rally, including you on the stage, made it into a new video that Hillary Clinton is using in her campaign. Tell our listeners about this video and your role in it and how you feel about that.

“Yes. It was an insane experience. I woke up one morning and some friends had texted me that I was in a Hillary Clinton ad. I couldn’t just even wrap my head around what that might mean.

“So, I went and found the ad online and the ad begins with all these pictures of the women’s movement. It’s starts by invoking 1848 and it shows all these pictures of these amazing, heroic struggles that women have carried out throughout all of the years since then. It shows incredible women, like Shirley Chisholm and I believe Angela Davis is in it. And you start to get really roused and inspired and it’s really beautiful and then at the end it says ‘With the nomination of Hillary Clinton, we’ve made it.’ And I was just like ‘Oh, God.’

“I was getting really upset in the beginning of the ad, where I’m like “I can’t believe she’s using the entire feminist struggle to say that everything that all these women have been fighting for is just all going to culminate in her.” That’s incredible entitlement. That’s incredible insane entitlement. Insane arrogance to take credit for basically, all of the hard work that all of the women organizers in this country have done, for generations and say that it’s all in support of her. It’s disgusting.

“So, I was most mad about the co-option of the entire feminist movement and then as I’m watching it, I see a picture of myself on stage underneath a big purple WORD banner and it just sent me through another level of furious.

“We worked very, very hard on that demonstration. That banner says ‘Defend women’s rights. We won’t go back. We’re gonna fight back.’ Because, we’d been organizing our community. We were organizing people to get into the streets to fight for our rights, for our people, for our community. And to see Hillary Clinton take that–take credit for our work, essentially–take all of that great organizing energy that we were able to produce, in the struggle for justice, and use it for her campaign–which is so fundamentally injust [sic]. Her campaign, which supports trade deals that will put so many people out of jobs. Her campaign which supports the murder of women of color all over the world. Her politics, which have labeled black youth as ‘super predators’, militarized the police and failed so much of my community. To see her try to put my work in support of that has made me completely furious.”

So, aside from the video, what is your reaction to a woman, Hillary Clinton, clinching the nomination for a major party in the US; especially with regard to the fact that you, as a woman, have also been a presidential nominee–was it a nominee or a candidate?

“I was a candidate. I was a presidential candidate.

“Yeah, it was very upsetting. With the Hillary Clinton campaign, I think they are seeking to erase the history, the true history which shows that there have actually been many female candidates for our presidential parties throughout the years. They’re trying to say that it’s just Hillary, she’s the first one, we also support her because she’s first.

“But, there have been many, many progressive women to run including Shirley Chisholm, including Cynthia McKinney, women I look up to. Especially Gloria La Riva, the presidential candidate for the Party of Socialism and Liberation. She’s been a feminist for decades. She’s been one of my heroes. She’s been an actual organizer.

“And so for everyone to try to say that Hillary Clinton is the first, or something like that, it’s just a complete lie–a complete falsehood.

So, you’ve already mentioned a candidate or two. Have you made up your mind about who you’ll be supporting in November?

“Oh, definitely Gloria La Riva. And if anyone’s interested in a real progressive, feminist, candidate you should check out www.glorialariva4president.com. She’s somebody that I’ve looked up to for a number of years.

“I first met her when I was a teenager. And when you meet her, she’s just the most amazing, dynamic organizer. This woman has decades of experience in every struggle. If you hear stories that she tells about the first marches for LGBT rights, about the first caravans of solidarity from Cuba, she has always been on the front lines, fighting for what people like me actually need and what people like me actually want: fighting for a more just society. That’s definitely my candidate this year. Somebody who’s actually been in the streets, fighting for people’s rights and is a real leader in the struggle.”

And our listeners might be most familiar with her recently, about her activism and work to free the Cuban 5.

“Yes, absolutely. And she’s been a leader in that struggle for many decades. She’s a real hero for what she’s been through, working to bring greater solidarity to Cuba and to promote a more just world.”

Well, Peta, these are my only questions. If there’s anything else that our listeners need to know, you can let us know right now.

“I would say check out www.glorialariva4president.com.

“As I said earlier, every single right that we’ve won, throughout history, was won by organizing and fighting for it. So, regardless of who you vote for in this election, don’t forget about the struggle in the street, that’s where you need to be if you want to see real change.”

Gloria La Riva is the Party for Socialism and Liberation presidential candidate this year.