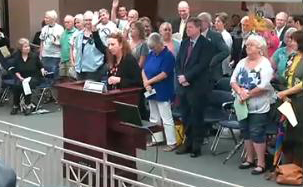 A state house subcommittee has advanced a bill to regulate fracking in Florida, despite overwhelming opposition during public testimony where 35 residents opposed the bill.

The sponsor of HB 191, Ray Rodriguez of Ft. Myers, told the House Agriculture and Natural Resources Subcommittee his bill is different than the one the house passed last year but was rejected by the senate.

“The status quo has us in a position where technology has exceeded our statutory regulations. Under existing regulations fracking can occur in this state without a specific permit issued for this activity by (the Florida Department of Environmental Protection, DEP). All a company has to do is to come in, apply for a conventional drilling permit, and then at a later time notify DEP by a workover notice that they’re going to frack. And the DEP has to accept that there’s nothing that can be done beyond that, statutorily. So it’s my belief that we should have a specific permitting process for this activity here in the state of Florida. And that was the genesis of this bill. What this bill does is it puts in place a moratorium on fracking. And the reason there is a moratorium is because we’re going to have a study that is done.”

During public testimony only three members of the public supported Rodriguez’s bill. They were from the Florida Petroleum Council, Associated Industries of Florida and the Florida Chamber of Commerce. David Mica, the director of the Florida Petroleum Council, told the House Agriculture and Natural Resources Subcommittee he is okay with this bill regulating fracking and doing more studies in Florida because it would create jobs and that research shows fracking is safe.

“Collier County picked out the study that was mentioned here. Associated the one well that was brought into question here. And it is showing that groundwater is perfectly fine. And water sampling has been perfectly fine there. As also was mentioned the Environmental Protection Agency spent five about million dollars on their study; really, really comprehensive. All geology is unique. It would be my contention as a non-geologist that we will find similar results to a study that takes place here in Florida specific to our geology here with regards to the potential for this kinds of activity to take place. We don’t believe as an industry that we want to just do more studies. But if it will satisfy — which I don’t think it will — many of the folks who do not want our operations to exist, not here not anywhere. And if they just would say that would be fine. But you can’t just keep moving the ball because the studies keep showing on both sides of the aisle that we do a pretty darned good job. And it’s transformed America it’s made us an energy producing nation. It’s showing up in the prices to your constituents at the pumps. It’s making a difference and I appreciate that question. We have a very good record with regards to water quality in that regard.”

Thirty-five residents opposed the fracking bill during public testimony. One was Dr. Ronald Saff, a physician in Tallahassee and a member of the Florida Chapter of Physicians for Social Responsibility. Saff said the kinds of jobs fracking will bring to Florida might not be the ones Mica has in mind.

“There’s increased endocrine hospitalizations, hospitalizations for heart problems, urologic hospitalizations, skin problems. Sure, fracking will create jobs, I’ll give it to Mr. Mica and some of the others, but look at those jobs I think they’re going to be grave diggers morticians and funeral home directors.”

Rich Templin of the Florida AFL CIO said the broad membership of his labor union coalition voted to oppose fracking and this bill.

“A cross section of Florida directed us to oppose this legislation. I was surprised at first, but I guess I shouldn’t have been considering that 17 counties in almost 40 cities have passed resolutions against these drilling practices, many in districts represented by folks on the committee. Now, we are being told that we should welcome this bill because it brings a regulatory framework where none exists. There are many experts on environmental regulations in the room that can speak to that. But what else is in the bill? Well, lines 82 to 91 tells our members, the folks that directed us to be here today, that there’s no way they can take local action to protect their families and their communities.”

Representatives of the Florida Association of Counties and Florida League of Cities said they were working with the bill’s sponsors to address concerns – especially about local controls that may be taken away.