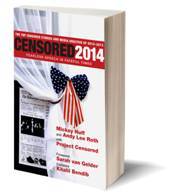 PROJECT CENSORED exposes us to the “hidden news”

PROJECT CENSORED educates students and the public about the importance of a truly free press for democratic self-government. They expose and oppose news censorship and promote independent investigative journalism, media literacy, and critical thinking. Project Censored’s work—including their annual book, weekly radio broadcasts, campus affiliates program, and additional community events—highlights the important links among a free press, media literacy and democratic self-government. PETER PHILLIPS and MICKEY HUFF will be our guests to discuss their work and its importance to whistleblowers.

At the Whistleblower Summit in DC July 28-31, Project Censored will receive the Pillar Human Rights Award for International Persons of Conscience. Mickey Huff and Andy Lee Roth will accept the award on behalf of Peter Phillips and our great team at Project Censored. They are being recognized for their First Amendment work and their commitment to fighting censorship and giving voice to the voiceless while celebrating independent, truth-telling journalism for close to four decades. Arlene (who was given this award in 2012) will also attend the conference. They will all 3 participate in a panel at the Russell Senate Office Building Wednesday, “Whistleblowers & Journalists: Tapping the Power of the Media.”

As early as 2011, Jones Day lawyers were considering how bankruptcy could be used to eliminate pension obligations in Detroit. Concerns for public health and are reduced to simple equations and potential markets. Political choices, balancing costs and benefits, to whom and for what purpose, are decided behind closed doors, with no public explanation or accountability.
This assault on Detroit includes a form of psychological warfare. The first shot of this battle was in August of last year. Emergency Manager Kevin Orr told the Wall Street Journal the people of Detroit are “dumb, lazy, happy and rich.’ SHEA HOWELL discussed this in an article published Monday on Common Dreams and she will continue this discussion on From a Woman’s POV.
SHEA HOWELL is a professor and chair of the Department of Communication and Journalism at Oakland University in Rochester, MI, where she teaches courses on communication theory and multicultural and political communication. Her most recent book is Making Sense of Political Ideology. She is also the author of Reflections of Ourselves on women, politics and media and co-author of The Subjective Side of Politics and Patterns of Power.