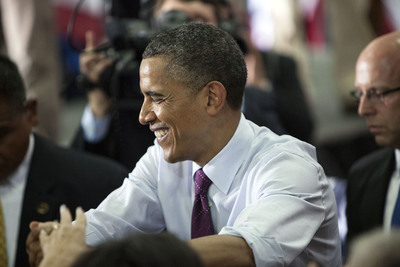 Here is the transcript of the remarks on climate change by President Barack Obama in the Everglades Wednesday, as provided by the White House.

Office of the Press Secretary

REMARKS BY THE PRESIDENT
ON THE IMPACTS OF CLIMATE CHANGE

THE PRESIDENT: Hello, everybody! Please have a seat. It’s good to be back in Florida. So I can’t think of a better way to spend Earth Day than in one of our nation’s greatest natural treasures, the Everglades. (Applause.) And anybody who comes here to visit — and I advise everybody who’s watching who hasn’t been down here to come on down. You can see what makes this unique landscape so magical — what the poet Emma Lazarus called “the savage splendor of the swamp.” Although I was informed it’s not technically a swamp. (Laughter.)

I want to thank our outstanding Secretary of the Interior, Sally Jewell, who’s here. (Applause.) Her team at the Interior Department and the National Park Service Director Jonathan Jarvis for helping to protect places like this. (Applause.) The Everglades National Park Superintendent Pedro Ramos is doing outstanding work. (Applause.) I want to thank Miami-Dade Congressmen Murphy and Carvalho who are here doing outstanding work, as well as Debbie Wasserman Schultz. (Applause.) You’ll be pleased to know that they are all in when it comes to protecting the Everglades, and we’re very proud of the good work that they’re going. We even have the Science Guy, Bill Nye, here. (Applause.) There’s Bill.

Now, they’re all here and we’re all here because this 1.5 million acres is unlike any place on Earth. It’s no wonder that over a million people visited last year alone. The sawgrass prairies and mangrove forests are home to an incredible diversity of wildlife — bald eagles, herons, hundreds of plant species, from pine trees to wild orchids. Believe it or not, south Florida is the only place in the world where you can find both alligators and crocodiles in the same habitat. I’m told this is a good thing. (Laughter.)

In the words of Marjory Stoneman Douglas, who helped preserve this land: “There are no other Everglades in the world.” But part of the reason we’re here is because climate change is threatening this treasure and the communities that depend on it, which includes almost all of south Florida. And if we don’t act, there may not be an Everglades as we know it.

2014 was the planet’s warmest year on record. Fourteen of the 15 hottest years on record have all fallen in the first 15 years of this century. Yes, this winter was cold in parts of our country, including Washington. Some people in Washington helpfully used a snowball to illustrate that fact. But around the world, in the aggregate, it was the warmest winter ever recorded.

This is not a problem for another generation. Not anymore. This is a problem now. It has serious implications for the way we live right now. Stronger storms. Deeper droughts. Longer wildfire seasons. The world’s top climate scientists are warning that a changing climate already affects the air that our children are breathing. The Surgeon General and I recently met with doctors and nurses and parents who see patients and kids grappling with the health impacts. The Pentagon says that climate change poses an increasing set of risks to our national security.

And here in the Everglades, you can see the effect of a changing climate. As sea levels rise, salty water from the ocean flows inward. And this harms freshwater wildlife, which endangers a fragile ecosystem. The saltwater flows into aquifers, which threatens the drinking water of more than 7 million Floridians. South Florida, you’re getting your drinking water from this area, and it depends on this. And in terms of economic impact, all of this poses risks to Florida’s $82 billion tourism industry on which so many good jobs and livelihoods depend.

The steps we’ve taken over the last several years are already making a difference. We’re using more clean energy than ever before. America is number one in wind power, and last year we generated 20 times more electricity from sunlight than we did in all of 2008 — 20 times.

We’ve committed to doubling the pace at which we cut carbon pollution. China, in part because of our actions, has now committed for the first time to limit their emissions. And this means that there’s new hope that this year the world will finally reach an agreement to prevent the worst impacts of climate change before it’s too late.

We’re wasting less energy, with more fuel-efficient cars that save people money at the pump, and more energy-efficient buildings that save us money on our electricity bills.

So more clean energy, improved energy efficiency — these steps can help us avoid some of the worst effects of climate change down the road. But we also have to prepare for the effects of climate change that we’re already too late to avoid. If you think about it, this is like we’re hitting the brakes on a car, but the car is not going to come to a complete halt right away. So some of these changes are already happening, and even if we take the right steps, we’re going to have to make some adaptations.

And that’s why we’ve been working with cities and states to build more resilient infrastructure and restore natural defenses like wetlands. And today, I want to announce new actions to protect our national parks and our public lands, and the communities that rely on them.

In 2014, almost 300 million visitors to our national parks spent almost $16 billion and supported 277,000 jobs. So protecting our parks is a smart thing to do for our economy. That’s why I’ve set aside more public lands and waters than any administration in history. (Applause.)

Here in the Everglades, we’ve already invested $2.2 billion in restoration efforts. With the support of some outstanding members of Congress, I’ve proposed another $240 million this year. We want to restore the natural water flow of the Everglades, which we know is one of the best defenses against climate change and rising sea levels. (Applause.) And I’m calling on Congress to fully fund the Land and Water Conservation Fund, which supports this work across the country. (Applause.)

I’m also announcing $25 million in public and private money for restoration projects at our national parks. And this is part of our broader effort that we’ve launched to encourage every American to “Find Your Park.” Chances are, there’s one closer than you think.

Just last weekend, Michelle and I took the girls for a hike in a national park just 20 minutes outside of Washington, D.C. As we were walking a trail along the Everglades, we saw a group of school kids — couldn’t have been more excited about mostly seeing the gators, not seeing me — (laughter) — but also learning about the science of the planet that they live on. And I want every child to have that opportunity.

So starting this fall, we’re going to give every fourth grader in America an “Every Kid In A Park” pass, and that’s a pass good for free admission to all our public lands for you, your families for an entire year. (Applause.) Because no matter who you are, no matter where you live, our parks, our monuments, our lands, our waters — these places are your birthright as Americans.

And today, I’m designating America’s newest national historic landmark, the Marjory Stoneham Douglas House in Miami, so that future generations will know how this amazing woman helped conserve the Everglades for all of us. (Applause.)

We’re also working with farmers and ranchers and forest land owners to reduce net greenhouse gas emissions. I’m going to keep doing everything I can to prepare and protect America from the worst effects of climate change, including fighting for clean air, clean water. Because in places like this, folks don’t have time, we don’t have time — you do not have time to deny the effects of climate change. Folks are already busy dealing with it. And nowhere is it going to have a bigger impact than here in south Florida. No place else. It has to be paying closer attention to this and acknowledging it, and understanding that if we take action now we can do something about it. (Applause.)

On the way in, I was talking to some folks about the fact that Teddy Roosevelt, he’s a Republican — started our National Park System. Richard Nixon started the EPA. George H.W. Bush was the first President, globally, to acknowledge the impacts of climate change and that we needed to do something about it. This is not something that historically should be a partisan issue.

Five years ago, local leaders down here, Republicans and Democrats, formed the bipartisan Southeast Florida Regional Climate Change Compact — an agreement to work together to fight climate change. (Applause.) And it’s become a model not just for the country, but for the world.

It’s the type of mission that Americans from all walks of life are taking on — from the CEOs of some of our biggest corporations and utilities, to student organizations across the country. Because they know that simply refusing to say the words “climate change” doesn’t mean that climate change isn’t happening. (Applause.)

And we know that in our own lives. If you’ve got a coming storm, you don’t stick your head in the sand; you prepare for the storm. You make sure our communities are prepared for climate change. And that’s an economic imperative. Protecting the one planet we’ve got is what we have to do for the next generation. I want Malia and Sasha not only to be able to enjoy this amazing view; I want my grandchildren — a way, way long time from now — (laughter) — to enjoy this amazing view. And their children, and their children after that. That’s what we do as Americans, take responsibility and leave behind for our children something special.

And we are blessed with the most beautiful God-given landscape in the world. (Applause.) It’s an incredible bounty that’s been given to us. But we’ve got to be good stewards for it. We have to take care of it. We only get to enjoy things like our amazing national parks because great Americans like Teddy Roosevelt and Marjory Stoneman Douglas and a whole bunch of ordinary folks whose name aren’t in the history books, they fought to protect our national inheritance. And now it’s our turn to ensure that this remains the birthright of all Americans for generations to come. So many people here are active in your communities, doing what’s needed. The young people who are here, the next generation, they’re way ahead of us in understanding how important this is. Let’s make sure we don’t disappoint them. Let’s stand up and do what’s right before it’s too late.

Thank you very much, everybody. (Applause.) Thank you.