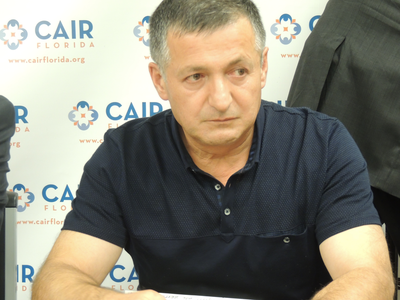 The father of a man killed by law enforcement officers while being questioned about his relationship with the Boston Marathon bombing suspects is looking for answers about why his son was shot multiple times. During a press conference Tuesday at the Council on American-Islamic Relations office in Tampa, Abdulbaki Todashev spoke publicly about his son.

“I came to America to rely on [the] American legal system, that I will be able to pursue and achieve the justice for my son… I hope and pray that no mother and no father will ever have to endure and go through what I’m going through right now. My son was a very good boy and he is innocent and he was simply killed.”

Todashev spoke through a translator.

The Orlando-area state attorney announced last week he was launching an independent review of the shooting. Supporters announced Tuesday that Todashev retained Tampa attorneys Barry Cohen and Eric Ludin to try to compel prosecutors to file charges against the law enforcement officers involved in the shooting death of his son, Ibragim Todashev in May. The legal team will also consider civil action. Ludin, one of the attorneys, said there doesn’t appear to be any reason for officers to have opened fire.

“The FBI reached out to Mr. Todashev’s son and spoke to him and asked to speak to him again. Mr. Todashev’s son already had a plain ticket to leave the United States to go back to Russia to visit with his family. He was assured by the FBI that this would be the last time that they wanted to speak to him and he delayed his trip home to meet with the FBI because of, apparently, an effort to want to be cooperative.”

Initial reports from the FBI claimed Ibragim Todashev lunged at officers with a knife. But they later said it was no longer clear what happened. Other speculation has surfaced suggesting Todashev may have had a gun or a sword or that he may have simply just engaged in a physical altercation. Ludin said there is no evidence suggesting Todashev had a weapon. He added the slain man was a mixed martial arts fighter and that was how he was connected to the Boston Marathon bombing suspects.

“There’s a gym where people train for that and my client’s son also trained at that gym for a period of time. So, they were an acquaintance. I think that the FBI, in its effort to do a complete investigation of what happened in Boston, made it a point to speak to anybody who was an acquaintance of the bombing suspects.” 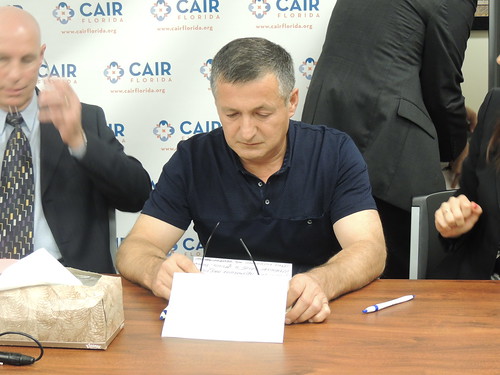 The Council on American-Islamic Relations of Florida, or CAIR, has also jumped on board to find some answers. Executive director Hassan Shibly said Todashev was recovering from knee surgery and was functioning as a “disabled fighter.” Shibly showed photos of Todashev’s knee with dozens of staples holding together the incision after the surgery, but was not able to provide an exact date of the surgery.

“But it was relatively recent. He was still limping. He was still having a difficult time walking at the time when he was being interviewed by the agents.”

CAIR hired private investigators and an ex-cop who found no evidence that Todashev used or even had access to a weapon. Shibly said there have also been sources within involved departments who have confirmed that.

“I think what’s clear is that our sources within the Department of Justice and the FBI have said that it appears he was unarmed when this whole thing happened. And remember, the onus is on the FBI. If they are questioning somebody who they believe is dangerous – which we have no reason to believe he was dangerous – but if they were questioning somebody in his home, I think the onus is on them to make sure the area is secure and if they didn’t than they didn’t do a professional job and policies need to be changed, people need to be reprimanded.”

The ACLU of Florida requested a Department of Justice probe into the shooting, but that was declined. Yvette Acosta MacMillan, a staff attorney with the ACLU, said the agency also requested reports from the FBI and the medical examiner’s office – both of which were also declined.

“One of the arguments we put in for an independent investigation was that the FBI should not be investigating itself. There was a New York Times report after much research that indicated that the last 150 shootings involving FBI agents after the FBI conducted investigations, they were all determined to be justified.”

CAIR’s Hassan Shibly said his group has also tried to access those reports.

“However, the FBI barred the medical examiner’s office from releasing that report, even to the family and that was very upsetting. Now, I think we tend to understand the reason it was barred is potentially because of the criminal investigations and, in fact it was barred because of the criminal investigation potentially into the officers involved as we understand it.”

Despite a lack of medical reports verifying what happened to the younger Todashev, Shibly claims he was shot at least 7 times.

“Well, we have his friends and family, they washed his body, they prepared it for the burial and we have the photographs of the body where there’s about, over a dozen bullet wounds and injuries on the body. But, again, we can’t confirm the exact nature of all those injuries until we have the medical examiner report. That’s why we’re not releasing our preliminary investigation as of yet.”

“One of the things we’ve confirmed is that only one officer – it was the FBI agent that shot all the bullets. And what the homicide detective’s opinion was, because he worked for law enforcement for over 20 years, he said that if there’s a justifiable shooting, typically all of the officers will draw their weapons.”

Meanwhile in Massachusetts, two other people associated with the surviving Boston Marathon bombing suspect have also been questioned by FBI agents. The two college friends of Dzhokhar Tsarnaev were indicted Tuesday for disposing of evidence from his dorm room. They are accused of throwing away fireworks. Both suspects deny doing anything wrong. If convicted, they face up to 20 years in prison.