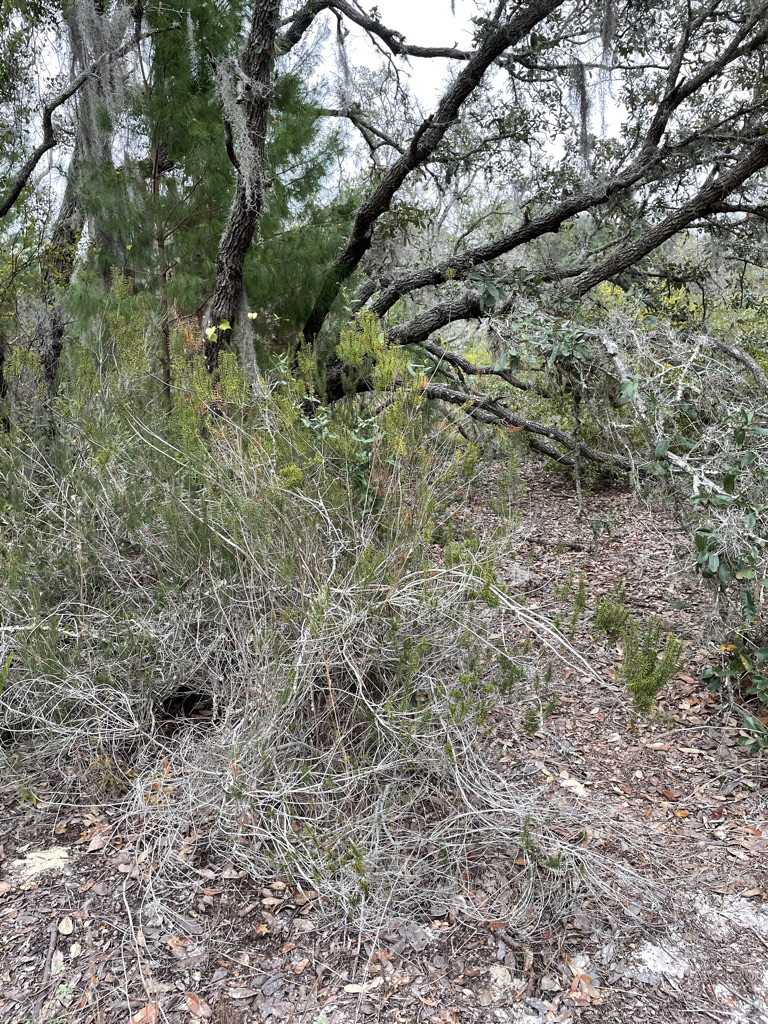 One of the last remaining sand scrubs in Pinellas County is at risk of being destroyed. The group trying to buy and protect the land has six months left to raise over $3 million for the purchase. In Tarpon Springs, nestled among subdivisions with names like Whispering Pines, sit 14-acres of uninterrupted Florida sand scrub. A vital part of the area’s watershed, the land is in danger of being developed into high-end townhomes. The West Klosterman Preservation Group is raising funds to buy the land, but time is running out. In the first of a two-part series on the West Klosterman Preserve, I took a hike with the group’s chairperson, Brad Husserl, to see and hear what’s at stake. 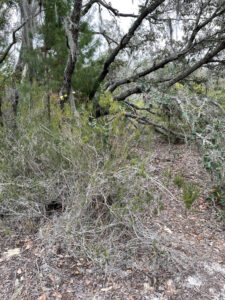 “The sand scrub is typically kind of high land, the sand is easy to work with,” Husserl said. “So a developer would look at this and say, Oh, I could easily build out here and that’s the problem that because that’s where the developers have been choosing. And so we’re losing a lot of it.”

Scattered throughout the preserve are Gopher tortoise nests of all sizes, some about a month or so old. Baby tortoises recently hatched, the eggshells still on the ground surrounding the burrows. Threatened under the Endangered Species Act because of the huge loss of habitat, the here gopher tortoises are thriving.

“A lot of the eggs hatch this year,” Husserl said. “Those tortoises lived to grow up a little bit and make some homes, so we’re seeing a lot of the new burrows.”

Called burrow aprons, entrances are sized according to each tortoise’s shell. The underground burrows extend 14 feet long and six feet deep, keeping tortoises safe from fires, extreme temperatures, drought, and predators. One predator it doesn’t protect against; development. Construction within 25 feet of a burrow requires a permit to move the tortoise to another location. According to the FWC, in 2021, 3,000 relocation permits were issued, accounting for one-fifth of all permits issued since 2008. 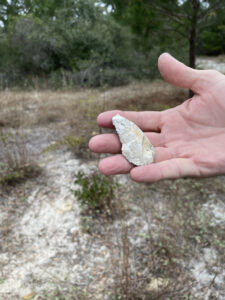 In the tortoises’ digging, they sometimes unearth pieces of history. Called chert, the pieces of limestone debris are leftovers of ancient toolmaking. We found one during our hike, shaped like an arrowhead.

“Yeah, well they make it out of that same material [as arrowheads],” Husserl said. “It’s like Flint. You can tell when they crack it, it’s like a razor. This one looks like a tool of some sort.”

One of the last sand scrubs in the county

Nearby are some bones, possibly from a pig, cleaned and bleached by the sun. Coyotes often cut through the preserve. Osprey fly above, the sound of a highway barely audible. Husserl says Klosterman is full of wildlife.

“There are all kinds of animals,” Husserl said. “We’ve spotted a bobcat back here. There are flying squirrels at night. They’ll jump tree to tree if you have a flashlight.”

Klosterman Preserve is owned by Pinellas County Schools. The preservation group needs $3.2 million by July 1 to save this place. They’ve raised $350,000. If successful, the 14-acres will be combined with adjacent 76-acres at Mariner’s Point Management Area. The County manages Mariner’s Point and has agreed to take over the protection of Klosterman. Otherwise, developers are waiting. For more information, visit wkpreserve.com.