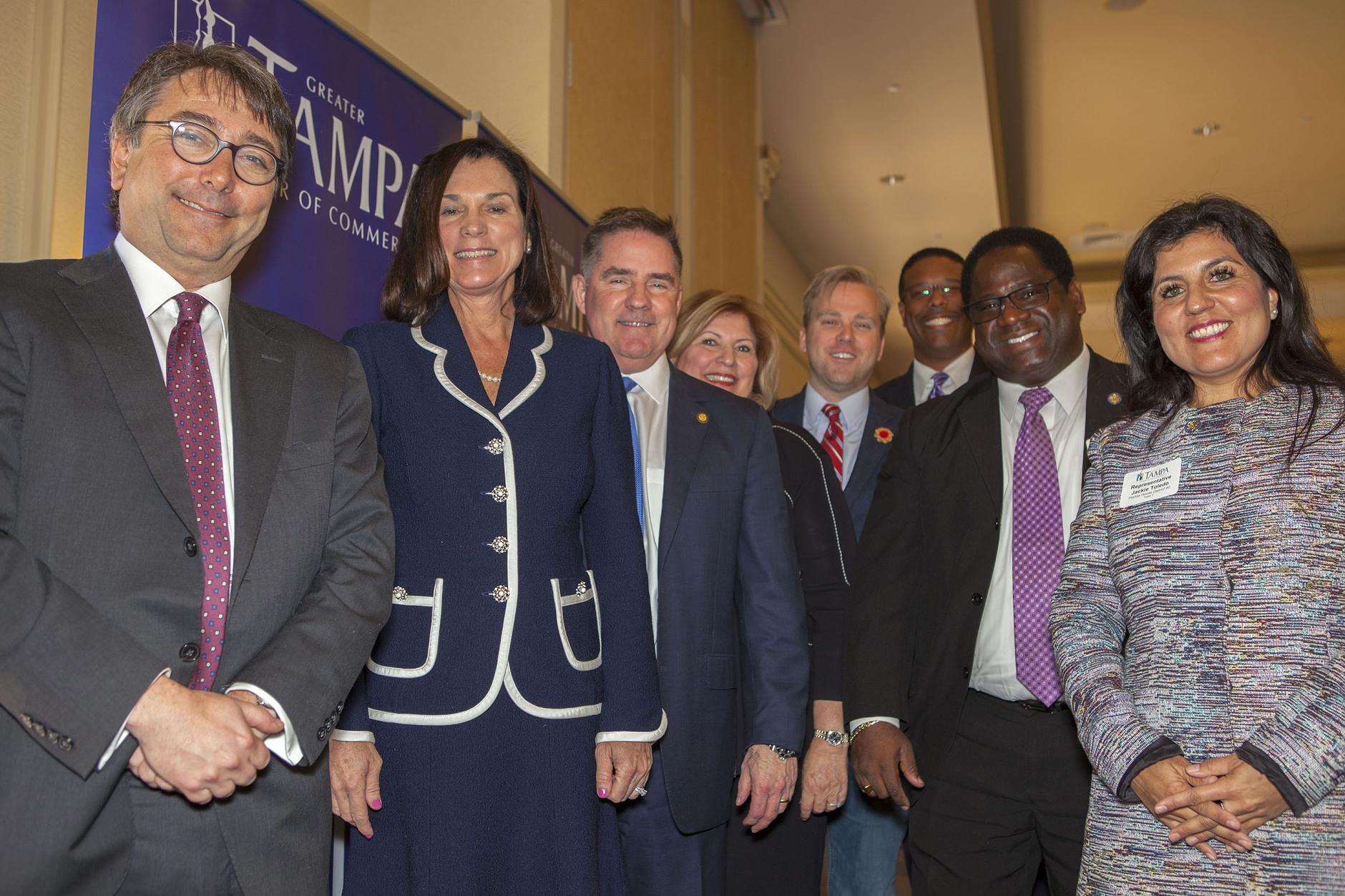 Two weeks after the Florida Legislature concluded its 2018 session, seven members from the Hillsborough County delegation convened in a forum sponsored by the Greater Tampa Chamber of Commerce on Friday to discuss what transpired during the 62 days that lawmakers gathered in Tallahassee. And like the session itself, gun control politics dominated the discussion.

Tampa GOP state Senator Dana  Young described how the priorities of the session changed from last fall, when it looked like dealing with the opioid crisis would take center stage. She said that changed after Hurricane Irma barreled through the state last September, followed by a demand for sexual harassment legislation following the revelations of sexual misconduct on the part of Clearwater Senator Jack Latvala in the fall. Those issues all somewhat faded from view after the Valentine’s Day massacre in Parkland last month, which then took precedence in the final three weeks of the session.

Governor Rick Scott signed a $400 million school safety package into law that was never a sure thing to get passed. Members from both parties expressed strong reservations, with the majority of Democrats complaining that the gun control measures included were insufficient, while some Republicans expressed revulsion at measures such as raising the minimum age to purchase  rifle from 18 to 21 and adding a three-day waiting period to purchase rifles and other long guns, while eliminating bump stocks. Those first two measures were strongly denounced by the NRA as well.

Tampa House Republican Shawn Harrison supported the proposal, saying that in the end, the Legislature’s first priority is to keep people safe. “That was government at its best, trying to rise up to the level of protection of our children,” he said.

Less than week after the tragedy at Marjorie Stoneham Douglas High School, dozens of students from Parkland came to the Capitol to lobby for gun-control and other measures to make schools safer. In a dramatic move, Miami House Democrat Kionne McGhee called for a debate on an assault weapons ban be brought to the floor, where it was rejected on a party-line vote.

House District 64 Republican Jamie Grant blasted McGhee for calling for the vote, calling it “an assault on the committee process” and an exercise in “tyranny.”

“Those kids were put up there as props and lied to,” Grant said disgustedly. “It was gross.”

Grant also denounced conservatives who accused some of the Parkland school activists of  being “actors,” an accusation made coincidentally by Ben Kelly, a district secretary to Harrison who was fired by House Speaker Richard Corcoran once that story went public.

In criticizing the school safety bill, Grant also took issue with the assertion that bump stocks are now banned, saying that the bill goes “far beyond” that specific provision.

“I would suggest that any of you who own firearms in this room, may well own things that are de facto illegal now under what is being called a ‘bump stock ban’ but actually bans anything that could mathematically increase the rate of firing a semi-automatic firearm,” he added.

St. Petersburg Democrat Wengay Newton rebuked Grant, saying that Democrats had dozens of gun control bills and amendments to the school bill that were rejected, and that McGhee was simply requesting a discussion on banning assault weapons, not pushing for an actual bill doing so.

“Leader D (McGhee) got the discussion started,” Newton said. “That motion was to have a discussion period. Not banning assault weapons. And you saw the vote. Straight down the party line, severely. And it went viral. So that’s how things work. So talking points are great…”

Newton added that the Democratic Black Caucus took the vow to oppose the bill because “it was a terrible idea” to arm school teachers. The final legislation does not explicitly call for that, but instead says that those who “exclusively perform classroom duties as classroom teachers” wouldn’t be allowed to participate in the program. Teachers who perform additional duties, like coaching football or heading the drama club, would be allowed to participate, along with administrators and cafeteria workers.

Tampa House Democrat Sean Shaw, who is leaving the House to run for attorney general, somewhat inelegantly called the bill a “crap sandwich” that legislators had to vote up or down on.

“There is no way that I’m going to arm teachers in a district in urban Tampa and give them ‘stand your ground’ immunity. There’s no way I’m going to do that,” Shaw said.

How was the recent legislative session overall?

Not all of the discussion was so intense. Moderator Peter Schorsch asked the lawmakers to give grades to Corcoran and Senate President Joe Negron.

Young gave both men incomplete grades, blasting the fact that her anti-fracking bill never received a hearing in the House, while the Senate failed to seemingly no-brainer legislation such as proposals on sexual harassment and texting while driving.

Grant gave Negron a “D-” for failing to get a sexual harassment bill passed in the Senate.

The legislators were also asked to predict who they believe their gubernatorial nominee will be this fall.

All four Republicans said it would be Adam Putnam, while the three Democrats weren’t so united.

Cruz said she didn’t have an answer, but when pressed, said it would be former Miami Beach Mayor Philip Levine.

Newton predicted it would be Tallahassee Mayor Andrew Gillum, while Shaw said he didn’t know, but ventured that Ron DeSantis would be the GOP pick.

(This story will later be updated with sound from the event).