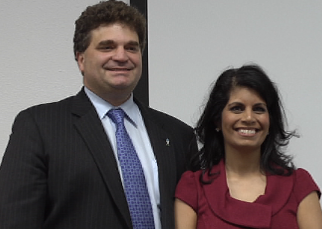 Dr. David McKalip and Dr. Mona Mangat went head-to-head for nearly two hours. McKalip, a neurosurgeon, calls for its repeal. Mangat, a physician specializing in ringing in ears allergies and asthma, supports it and sees it as a first step in reform.

Both agree that insurance companies are hurting the health care system as it stands now.

Mangat: “Insurance companies are in charge. They decide what treatments we can offer. They dictate what prescriptions we can write. They deny claims at will, sometimes just for not dotting your ‘i’ or crossing your ‘t’. And they impact how compliant or non-compliant our patients are.”

McKalip: “The more you spend on the patient the less goes into your pocket. If you spend too much on your patient the insurance company, who now has immense power, will come and complain and get you thrown off the panel. You’ll cry for help and you will not get it because it’s that insurance company that’s keeping the government and the politicians in office.”

However, McKalip says that a free market, one in which the government doesn’t interfere, is the best way to ensure cost control. He says market forces and the laws of supply and demand will dictate prices. But one audience member fervently argued on behalf of consumers who are struggling against rising premiums saying people are helpless against the insurance industry. But McKalip fires back.

In a single payer system like Medicare, all medical bills are paid for by that program, but since a single payer system isn’t what the Patient Protection and Affordable Care Act addresses, Mangat points out that the new law will create health care exchanges where health insurance companies will have to compete for consumers, and in competition, the best services should win over customers.

“The state will have the power to set up exchanges where insurance companies will have to compete for all these new lives that they want, they’re going to have to give a better product at a lower price, but they’re going to have to offer a basic set of services so that nobody’s going to buy some crappy plan that costs $10 a month and gives you nothing for the money. So, it’s going to cause competition, it is taking these free market ideas, but it’s using them in a way that will actually allow us to help people, not just let those that are healthy and wealthy to be helped and nobody else.”

Mckalip says the government is overstepping their boundary and that people are responsible for their own healthcare needs, but Mangat says that doctors need to advocate for those who can’t advocate for themselves.

Mangat: “And I personally feel that health care is a human right. I don’t think that it matters if you’re rich or you’re poor. I think you should be able to have access to care equally and fairly for all people.”

McKalip: “Medical care is neither a right nor a privilege, it is a service. It is a service that people like you and I provide and that people plan to pay for when they need it. If you consider it a right, please find where the right is defined in the Constitution of the United States.”

The Universal Declaration of Human Rights says every person has the right to medical care. It was adopted by the United Nations General Assembly and signed by the United States. While health care has become a multi-billion dollar industry that can be accessed across global stock markets, one person asked if it’s right that health care be treated as a commodity.

Mangat: “No, I do not think that health care should be treated as a commodity and I think it has been treated in that way. People have made profit off of misfortune, illness, death, off of human life. I completely agree with you that that should not be the way that it is.”

McKalip: “Profit is the most moral force in our society. Because through profit man is held accountable to each other. A man must justify why they should take your money in exchange for a service or a good.”

Passions ran high in the forum where a few audience members – healthcare professionals themselves – voiced their opinions, unsolicited. It is clear that McKalip sees power and advantage in keeping health care a capitalist industry while Mangat’s concerns lie with fairness and equal access.

Make no mistake, Mangat was clear that a 20% reduction in Medicare reimbursements would cripple her practice. But she voiced her support for the Affordable Care Act in favor of helping those who need help.