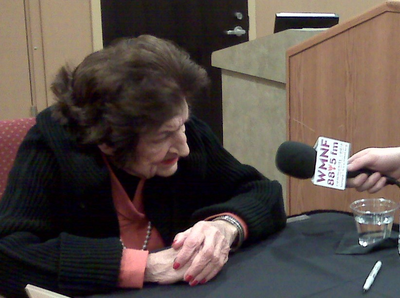 For fifty years Helen Thomas has reported on more U.S. presidents than any living journalist. She is famous for her phrase, “Thank you Mr. President,” which she has said at the end of White House press conferences.

Last night, Helen Thomas visited Orlando to promote her new book, “Listen Up, Mr. President: Everything You Always Wanted Your President to know and do.” she spoke to a crowd of more than 50 people at Valencia Community College.

Thomas recalls the tragedy of 9/11, but thinks the War in Afghanistan has gone too far.

She had hoped that America would have learned from Vietnam, and not merely accepted having US troops sent to war with no proof or justification for the extended campaigns in Iraq and Afghanistan. But Thomas says it’s up to the people to make sure that their questions are answered, and that presidents can’t always be expected to answer her questions.

Even Tampa locals went out to see Thomas, including John Thomas, who is Helen’s nephew. CEO of the Tampa Chamber of Commerce Bob Rohrlack, was impressed by her speech.

Thomas said that student loans should be more easily available, and that there should be less focus on science, and more civic education. She was responding to Janet Bryan, an Education major at Valencia College.

And Thomas compared the foreign policy rhetoric of Obama’s administration to the past rhetoric under Bush. She said the difference was slim.

After more than half a century of covering presidents, Thomas considers Kennedy to be the best president, Nixon the worst. She says Lyndon Johnson’s administration was the most positive and interesting, and Reagan was the most successful in achieving his goals by dramatically moving the country to the right. She considers George W. Bush to be a tragedy, but commended his father for winning the Gulf War, and being more democratic.