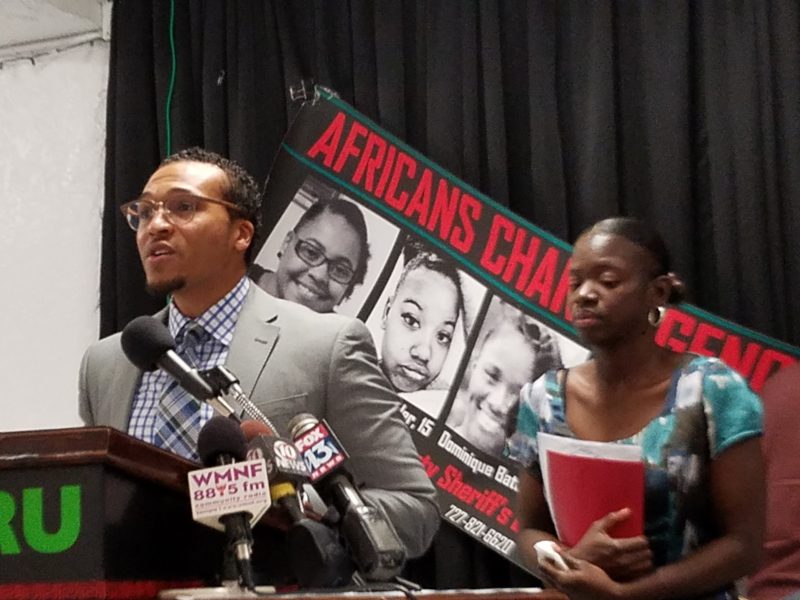 The mother of one of the three teenage girls killed after the car they were in crashed in a St. Petersburg pond while being followed by Pinellas Sheriff’s deputies will be represented by an attorney for the Uhuru movement. Yashica Clemmons, the mother of Dominique Battle, says she plans to sue the Pinellas Sheriff and has has cut ties with the attorney for the other girls’ families.

In a press conference in South St. Petersburg Tuesday morning, Clemmons showed a video of her teenage girl playing with her younger siblings and read a letter Battle had written to her.

Listen to the full story:

“I just want to get help because I know I’m not going to be able to stay on track, if I do it by myself. But, I don’t have a problem with doing what I’m supposed to do. I just get influenced easy. It don’t have nothing to do with how you raised me, I’m just growing up trying to see where I fit in. You really are a good mom – hard-working – I wouldn’t trade you for the world.”

The Uhuru movement has taken up the girls’ case in part because of how the girls and their families have been portrayed by the Sheriff’s Department and in the media. Omali Yeshitela, the chair of the International People’s Democratic Uhuru Movement, called out a Pinellas County Commissioner in particular. He didn’t use Ken Welch’s name, but it was clear Yeshitela was talking about Welch, who posted a video to Facebook about his visit to the pond where the three girls died. Welch concludes there was no way Sheriff’s deputies could have saved the girls.

“And that’s with one foot on dry land and one foot in the muck, it is very difficult and I’m not going to venture any further out.”

In the video, Welch is wearing wading boots and only makes it one step into the pond. Welch declined to be interviewed because he is out sick today. In his Facebook post, Welch wrote, “unsupported rhetoric and accusations will not move us forward, nor heal the destructive trends that are at work in our community.” But Omali Yeshitela of the Uhuru Movement says that unlike the three girls who died, people like Welch have the power to change what’s wrong in society.

“It seems to me that the statement coming from that gentleman should have been a self-criticism, in the sense that Yashica has no power. Here is somebody, of the county government, that has the ability to do something to change the conditions, on the ground in our community, to try to make jobs and a future happen, but, he doesn’t do that. We don’t hear from him: fighting. We haven’t heard a single thing of him putting on wading boots to come into the poverty of our community, and say he’s here to try to discover why people are so poor.”

Yeshitela says the Uhurus will wage a “relentless” international campaign for justice for the girls and their families. He says there is already interest from Sweden, the Bahamas and the U.K.  Yeshitela says if the group doesn’t get satisfaction by this autumn, it may take on the tourist industry and that they will fight in the courts and fight in the streets.

The court fight will be led by Aaron O’Neal, the general counsel of the Uhuru Movement, based in the Washington, D.C. area.

“So, they claimed they went through the water, but, it was just too dangerous for the officers to go in. And the three girls laid in that pond for more than two hours before anybody came in to get them.

“Deputy Traumer claims that he actually went into the water. He went 10-15 yards into the water and the car was 20 yards away. But, the dive team, in their incident report, said that it was actually 10-15 feet from the shoreline.”

“And, as has already been said, we demand black community-controlled police. Because if the community controlled the police, those girls would be alive today. And also, it can help end this police brutality we see around the country, with killings of black people by the hands of the police.”

O’Neal says they will pursue all legal options, but will likely file a wrongful death lawsuit against the Pinellas County Sheriff or the deputies involved.

Sheriff Bob Gualtieri has said the families’ claims that his deputies are at fault is ‘ridiculous.’