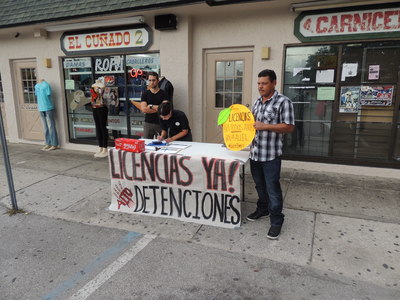 The Hillsborough County Sheriff’s office keeps undocumented immigrants in jail for a federal immigration enforcement agency instead of letting them bail out. An immigration’s rights group is asking them to join other local agencies who have stopped that practice.

According to an analysis by the group Raices en Tampa, more than 80% of undocumented immigrants held in the Hillsborough County jail aren’t charged with a crime. Marisol Marquez is the founder of that group.

And she claims investigators are often deceiving.

So the group is calling on Sheriff David Gee to stop doing that. Some agencies hold immigrants who are arrested for two days as a courtesy to federal immigration officials who can then have a chance to decide whether or not to deport that person. Because there are questions about whether or not that’s legal, Pinellas County Sheriff Bob Gualtieri isn’t doing it anymore. Neither are the Pasco or Hernando Sheriff’s offices. To help persuade Gee, Marquez and her group are talking to Tampa City Council members about joining the cause.

“We’re actually very confident. Every single person that we’ve talked to – we’ve even talked to some of the representatives from Mayor Bob Buckhorn and it seems like everybody is extremely supportive. They just want us to keep pushing for it and for there to be a lot more momentum around it.”

The group is also working to get support from local and state elected bodies to let undocumented immigrants get a driver’s license. Jared Hamil is also with Raices in Tampa.

“It’s a basic necessity that everybody, whether you’re undocumented or not, you need a license to get around.”

The group set up shop Monday night in front of a Spanish bodega on Fletcher Avenue to educate the Hispanic/Latino communities about its efforts. They collected petition signatures from people supporting both issues. And the two are linked. Many of the undocumented immigrants who are held in the Hillsborough County jail are there for driving without a license. Christian Cintora is undocumented. He doesn’t drive because it’s too much of a risk, but he has family members who do.

“I know a couple of relatives that drive without the license and they’ve been pulled over and it sets them back financially. That, and it’s an unnecessary worry. You go on the road to go to work, but you have to worry that you don’t get pulled over. You just become very OCD with following the traffic rules.”

The group also intends to start talking to Hillsborough County Commissioners to get their support for driver’s licenses for all and stopping unnecessary detentions.