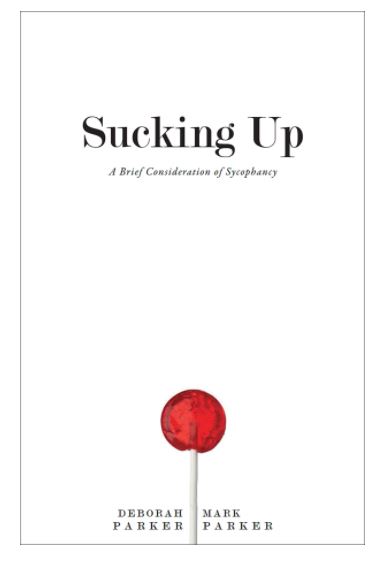 “Donald Trump feeds on flattery like a ravenous lynx!”  Says, professor Deborah Parker. She and Mark Parker are the authors of a timely new book, Sucking Up: A Brief Consideration of Sycophancy. In the age of Trump, a Suck-up a Brownnoser, a Bootlicker or perhaps a Lickspittle maybe a Toadeater are all adequate descriptions of people surrounding the President, but a Sycophant does the job so much better. From Dickens’ Uriah Heap to Kellyanne Conway, the Parkers trace the history of Sycophants in their engaging book, full of intelligent humor: “Sycophant: the word rolls delightfully off the tongue. One’s lips purse and expand. The s sound, the friction of the breath in a narrow opening, provides a hissing contempt.” Says, Mark Parker.

Intelligent humor is skillfully permeating throughout Amy Dickinson’s new book, Strangers Tend To Tell Me Things: A Memoir Of Love, Loss, & Coming Home. Her advice column is read daily by millions, but when one of her unusually sardonic responses went viral, Amy was truly surprised. She uses the example of the much-discussed dialogue on a parent’s distress over their son’s homosexuality to explain how she wants to be herself with her column. And, being herself, is the rāzôn ˈdetre of her new book.

Also in the show, a musical interlude from Marcus Fowler and Jamie Mac who perform under the moniker, Majik. They say this about their music, “We create music that weaves heartfelt lyrics over atmospheric sounds and broken beats, giving flight to the deepest thoughts we discover through feeling.” Make sure you let us know what you think of Majik’s music and all of Life Elsewhere’s programming.