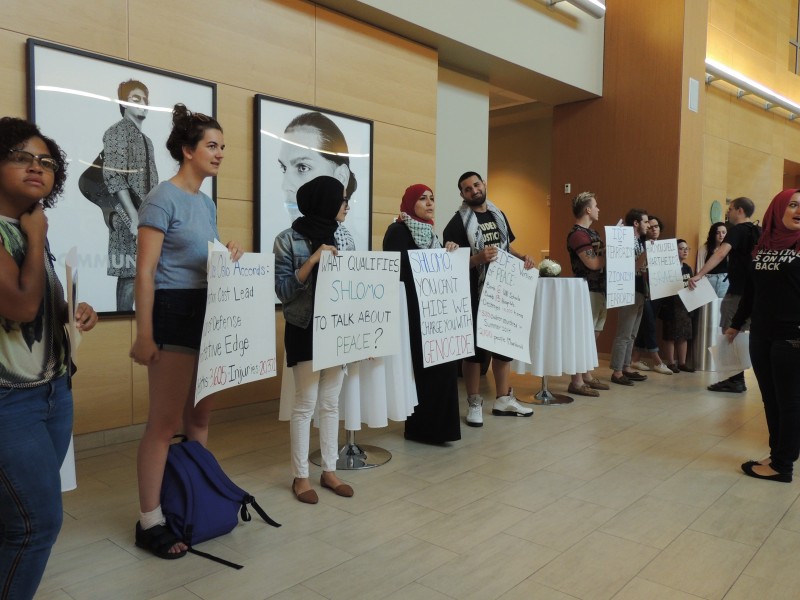 A retired Israeli Brigadier General told an audience at the University of South Florida in Tampa Thursday he supports the nuclear weapons agreement between Iran and the U.S. and other world powers. Shlomo Brom was part of a forum called Iran’s nuclear agreement and violent extremism in the greater Middle East: the implications for U.S. foreign policy.

After his speech WMNF News asked Brom why he supports the nuclear agreement with Iran even though the Prime Minister of Israel does not.

“I disagree with [Israeli Prime Minister Benjamin] Netanyau about the Iranian nuclear deal because of two reasons. First of all I believe that that is the best deal that could be achieved; a better deal couldn’t be achieved. That doesn’t mean this deal is perfect; it has weaknesses. That has to be dealt with through the implementation of the agreement. And the second reason that I disagree with Netanyahu, I think the alternatives to the agreement which are either to resume the sanctions or a military attack are much worse than the deal. Because it will be extremely difficult – practically impossible – to resume the sanctions in a situation in which the U.S. is the one that abrogated on the agreement, not Iran, and the military attack will achieve only a delay of the nuclear program for a very limited period of time.”

During his speech, Brom suggested that delay could be 2 to 4 years. In contrast, he feels Iran’s nuclear weapons program will be delayed by at least 10 to 15 years through the agreement hammered out with the U.S. and other powers.

But before his speech, the retired Israeli Brigadier General was protested by more than a dozen people from Students for a Democratic Society Tampa and Students for Justice in Palestine. Afterward, WMNF News asked SJP’s President Rahma Elmohd why she protested Brom even though they agree on the Iran nuclear deal.

“He started off his talk saying that we would be surprised by what he had to say. We weren’t. His name is Shlomo Brom and he’s a retired general who has contributed to many, I guess, peace talks that have only contributed to more wars against Palestinians – a far larger death toll. You know, we’ve had four or three wars in the past 16 years that have murdered Palestinians. So, he started off his talk about Iran saying that as America being our ally we have to support their agreement with Iran because they’re trying to create some kind of diplomacy. And then he ended it off with, well, Iran is not our ally because of their said relations to Islam and their said relations to supporting Palestine simply because of their relation to Islam. In reality we could say that Iran’s support of Palestine is because they’re against occupation or against the Apartheid that is happening there. And so by neglecting that he fit right into what we expected. He’s just someone who is trying to spread propaganda about what’s happening in Palestine / Israel and he’s not looking for the truth. And that’s why we’re here: because we don’t want someone like him who’s going to spread propaganda on our university where we come to learn and where we know others come to learn as well.”

At the USF forum Thursday, most panelists supported the negotiated agreement with Iran. But USF professor and National Security Council veteran Walter Andrusyszyn is not one of them. He cited polls saying  the deal is unpopular with Americans and he doesn’t trust Iran to follow through with its end of the bargain.