Home Blog News and Public Affairs Constitution Is separation of church and state even still a thing? 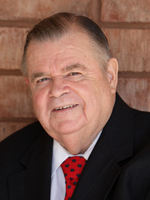 Dr. T. Wayne Bailey is a professor of political science for Stetson University College of Law in DeLand. He specializes in constitutional law and he’s here to talk to us today about the Liberty Counsel’s push for political advocacy in churches.

A conservative Christian group is asking church leaders to ramp up political advocacy. During one of several statewide “rallies”, leaders with the Who Will Stand campaign showed a video telling pastors it’s OK to talk politics.

That’s Matthew Staver, founder of the conservative Liberty Counsel that’s sponsoring the campaign. The one hour video went through, point by point, why pastors need not worry about keeping Christianity out of politics. He used a New York church as an example.

“This church, in 1992, decided to have a full page ad in USA Today and the Washington Times specifically opposing then Gov. Bill Clinton for president because of his position on abortion. The church listed its address and also asked for contributions to be sent to this church so that they could run more ads.”

“Yet even this church did not lose its tax exempt status. Why? Because the very next day, once it crossed the line, as long as it didn’t continue to endorse or oppose that day is a brand new day just like the moment of conception for that church. This issue of churches with regards to the letter is fundamentally important for you to understand because if a church ever crosses the line and makes a mistake, all it has to do is stop and the very next day is a brand new day.”

The video did go over some of the rules. Staver said a church can get away with using about 5% of its time on lobbying efforts. He pointed out that even a church with limited staff and volunteering could dedicate hundreds of hours a month to political issues.

The heads of three local pastors attended the video showing in Tampa. It was led by evangelical minister Larry Tomczak. The theme conveyed to pastors was to take off their muzzle and instead be a megaphone for change.

“There’s many pastors that will say to me, ‘aren’t you afraid you’ll lose your tax exempt status. That’s political, you shouldn’t get into that.’”

If successful, the campaign could open the flood gates for congregations nationwide to become a whole new lobby industry focused on furthering a pro-life agenda and other conservative talking points.

“Jesus said for that cause, shall a man leave his father and mother and be joined to his wife. That’s marriage, but when people want to redefine marriage … let it be whatever you want …. group marriage, polygamy. That’s when I would say, pastors, you need to know what does the scripture teach and in a charitable way, declare it.”

Tomczak also said immigration could be a hot topic among Christian leaders because of an influx of people pouring across the Texas border from Mexico.

“Well, that’s because in Latin-American countries the word is out – permisio – go, they’re not going to do anything … our nation will be overrun. We’ll have, like, an underclass of poor people that don’t know the language, don’t know the country, etc.”

The group will come back again in 6-weeks to speak with pastors about progress and other priorities. They handed out a list of things for churches to do between now and then including using the pulpit to encourage congregations to support what they call Judeo-Christian principles.