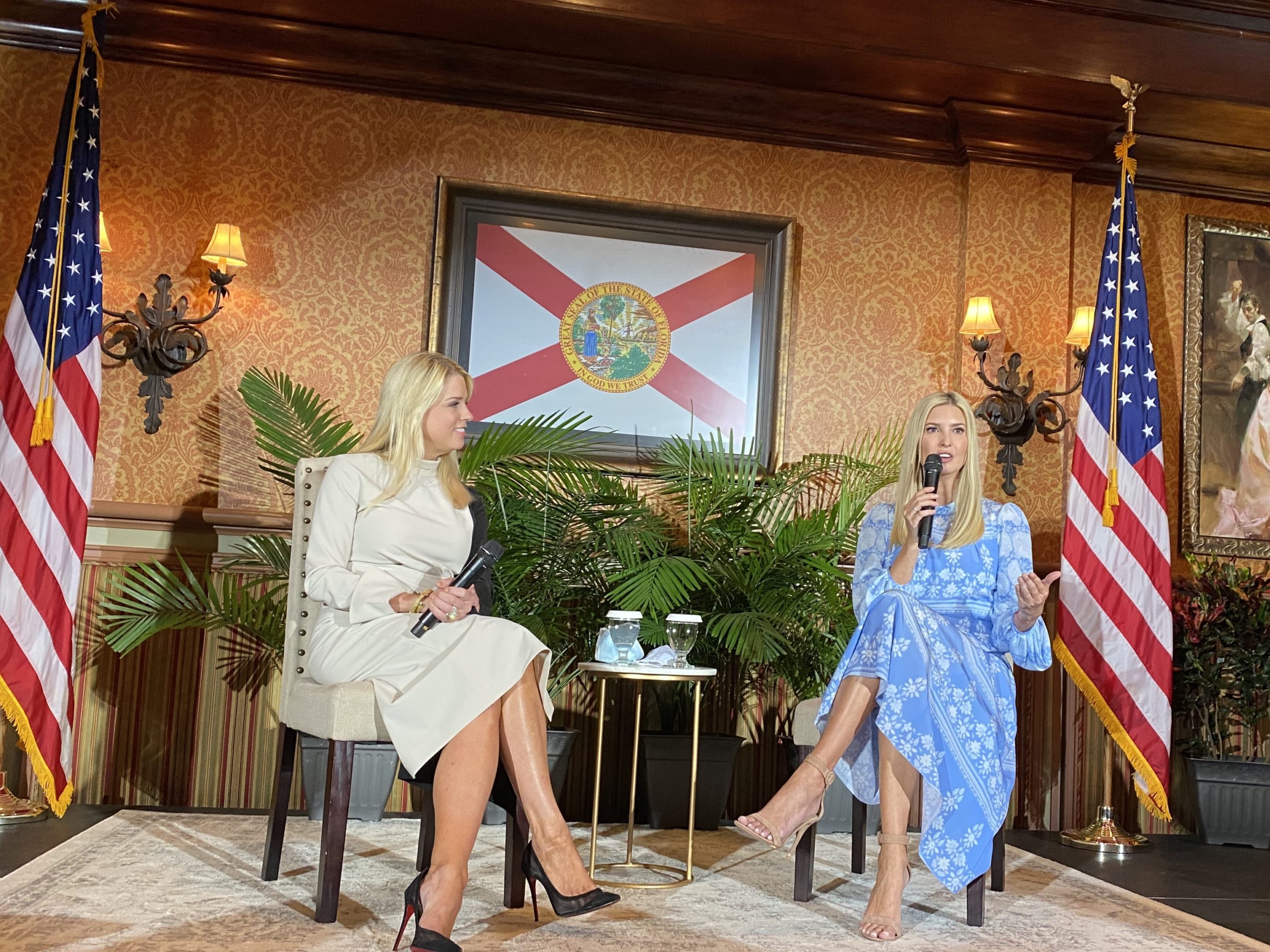 After touring the century-old Ybor institution and literally rolling up her sleeves to help make a loaf of La Segunda’s famous palm-crested Cuban bread, Ivanka Trump ordered four guava turnovers and three loaves of bread before heading to the Columbia for her talk with Bondi.

Bondi and Trump were flanked by American flags as they spoke from a small, lit stage with a framed Florida flag on the wall behind them. They talked for just over 30 minutes to a crowd of President Trump supporters including Florida’s education commissioner Richard Corcoran.

During the talk, Trump sang her father’s praises on topics from his coronavirus response:

“He brought his business sensibility to bear in mobilizing the full government, but also leaning on the private sector to do what they do best.”

“He renegotiated some of our worst trade deals starting with the job-killing NAFTA, which has such a tremendous impact on the economy here in Florida.”

Criticism of the President’s coronavirus response has increased in recent weeks following the release of taped conversations in which he admits to purposefully downplaying the pandemic’s dangers to avoid panicking the American people.

And while Ivanka Trump praised her father for working toward peace between Israel and the United Arab Emirates.

“Peace should be, that’s the greatest goal and that should be our collective desire,” she said.

Her husband and fellow presidential advisor Jared Kushner Wednesday advocated for the use of assassinations in U.S. foreign policy and said the President keeps all options on the table, despite the practice being banned by a 1975 executive order.

As the presidential race enters its final few months, Florida is again a crucial battleground state. Both major party candidates are especially vying for the Black and Latino votes and Biden currently leads with both groups.

So it’s no surprise Trump chose two of Tampa’s most historic Cuban institutions as stops for her visit. Though many Floridian Latinos tend to lean toward Democrats, Trump has seen increased support among Cubans, especially in Miami.

And while most Tampa Bay Cubans lean also tend toward the left, some, including Clara Montesino were out to the support the president earlier in the week when Democratic rival Joe Biden came to town.

“Biden, he’s going to the socialist side. As Cubans, we lived communism,” she said. “We didn’t read about it, we didn’t see it on T.V. We lived it. And as a person who has lived it, I don’t want this for my kids or my grandkids.”

Regeline Sabbat was one of only two Black people in attendance at Thursday’s Ivanka Trump event. Despite increased protests in response to the police killings of Black people in the U.S. and violent responses from counter-protesters and White Nationalist extremist groups, Sabbat, a 27-year-old Trump volunteer, said she thinks Trump is making America safer for everyone, including Black people.

Ahead of her trip, Ivanka Trump released a statement outlining some her father’s accomplishments, but Florida Democratic Party spokesperson Frances Swanson followed with a fact check calling Trump’s claims that the president has lowered prescription drug costs, combatted human trafficking, increased access to child care and cut taxes for working families a “litany of lies.”

“Another smoke and mirrors visit from the Trump campaign — and this time from the President’s daughter Ivanka Trump — isn’t going to change the fact that Donald Trump’s inability to lead has strapped the State with the worst health and economic crisis on record,” Swanson said. “He is going to lose this election because he failed to deliver on his promises and then spent months gaslighting Floridians instead of getting the job done and managing the coronavirus pandemic.”