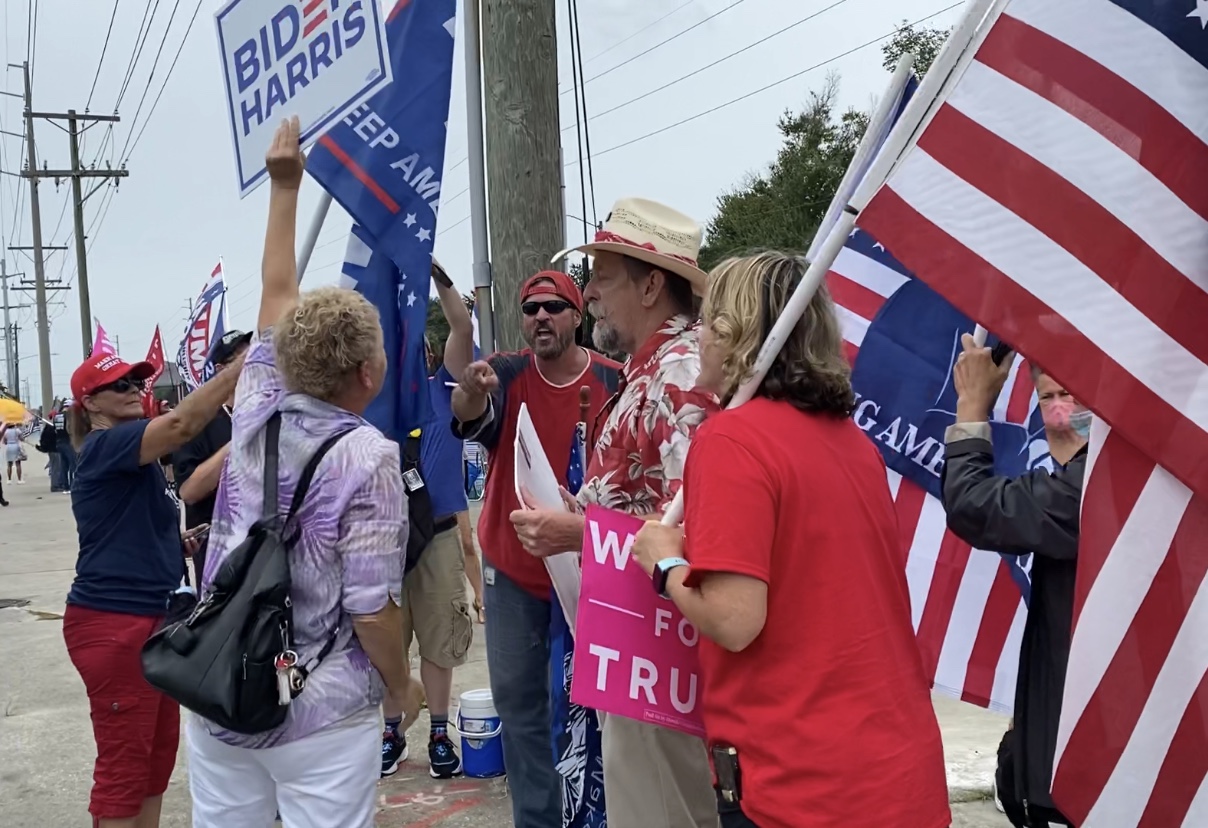 Democratic presidential nominee and former vice-president Joe Biden Tuesday made his first stop in Florida since accepting his party’s nomination.

Enthusiastic supporters of both candidates met on the streets just outside the school’s Dale Mabry campus.

Flags were out in force along Tampa Bay Blvd. Confederate flags, Gadsden flags, Blue Lives Matter Flags and some depicting President Donald Trump as Captain America or riding a dinosaur with a rocket launcher strapped to his back.

The chants ranged from the simply patriotic:

To the divisive and unabashedly racist.

“BLM. Burning, looting, murdering. That’s all they are,” one supporter chanted wearing an American Flag dress and waving her blue Trump flag.

Trumps supporters gathered in scores along the street, shouting their support for the president and disdain for the Democratic nominee.

Gathering tightly together, none wore facial coverings of any kind.

Some, like Ray Dennis, a Black woman supporting Donald Trump, said she hasn’t worn a mask during the COVID-19 pandemic, because the virus, she said, is a weapon from China to destroy the American economy.

“This coronavirus is a flu from China. It came from China,” Dennis said. “And that’s the reason why. They thought they was gonna bust our economy. Trump had it so good and so up in the air until they came and busted our economy.”

Biden’s campaign encouraged supporters not to gather on the street in order to encourage COVID-19 precautions.

Some supporters drove by in a caravan, prompting a few Trump supporters to block traffic and stand in front of Biden-supporting vehicles. A handful, though, chose to put on masks and join the crowd where they were heavily outnumbered.

David Coleman, who wore a mask while supporting Biden in the crowd, said he was afraid of the violence the President promotes and his supporters pick up on.

Inside HCC, Biden gave a reserved and measured speech followed by a roundtable with local veterans where he promoted unity and helping all Americans, even the ones who might not vote for him.

“I’m running for president as a Democrat, but I’m not gonna be a Democrat president. I’m gonna be an American president,” he said. “And I can tell you if I am elected, I’m gonna spend as much time helping people who didn’t vote for me as those who did.”

Speaking mostly on issues concerning veterans, especially Black and Latino veterans, Biden said increasing access to healthcare with shorter wait times, expanding mental health services and funding the VA would be paramount issues. He added that connecting veterans to jobs is an overlooked aspect of the VA he hopes to ramp up.

“We have to expand the access to these programs that connect a veteran with their most likely area of employment,” Biden said. “And that’s what I think the VA has to do more of.”

Biden said Americans are beginning to realize they were misled by Trump as he downplayed the dangers of COVID-19. Now that the truth is out, he said, American can heal and he’s hopeful, despite facing health and economic fallout from the pandemic. Biden said he feels more optimistic than ever because he believes in the strength of the American people when you tell it to them straight.

“People are figuring out that we’re all in this together. We can get through this if we just level with one another,” he said. “Just tell the truth.”

Meanwhile, on the streets outside the campus supporters clashed.

Donna Mckenna held high a “Biden-Harris” sign as she was surrounded by a group of Trump supporters. They yelled “four more years” inches from her face as they closed in. They called her a baby killer for voting democrat. She asked them to have intelligent argument.

A fellow Biden supporter told her they were not there to change minds.

The crowd quieted some and for a moment, McKenna talked with a few Trump supporters about immigration and domestic violence protection for women. She was alone and unyielding as the crowd around her swelled and quieted and swelled again.

“God Bless you, he said. “ As a Trump supporter, God bless you.”

They hugged each other.

And soon, others followed.