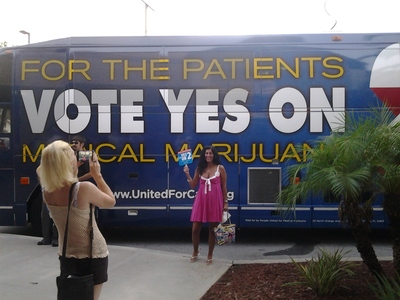 In front of a raucous standing-room-only crowd of almost 700 people Thursday night, six panelists argued in favor or against Amendment 2, the Florida medical marijuana initiative, which voters will decide on November 4. The forum was held at Harrison School of the Arts in Lakeland on August 28. As the moderator, Lakeland Ledger Editor Lenore Devore, pointed out, it was designed to be an educational session, not a debate. Audience members were encouraged not to applaud or speak out, but the raucous crowd members did anyway, and the proponents of Amendment 2 appeared to outnumber and out-yell the opponents.

To view the full hour-and-a-half video of the forum, visit this website:
http://www.ledgerdata.com/medical-marijuana/#video.

Attorney John Morgan, the biggest financial backer of the Amendment 2 campaign, arrived a few minutes late for the forum in a large “Vote Yes on 2” blue bus and rallied the supporters in the crowd. He apologized for being late, joking that his bus was stopped by the Osceola County Sheriff’s Department, but he only had Jack Daniels and vodka inside. Morgan surprised the crowd by noting how he is longtime friends with Polk County Sheriff Grady Judd, and that he would agree to disagree with Judd and keep the forum cordial.

Asked why pursue a constitutional amendment, Morgan said that the Florida Legislature forced his group’s hand by refusing to consider a bill at the Capitol. However, he gave praise to Senator Don Gaetz (“Thank God For Don Gaetz”) and his son Rep. Matt Gaetz for their help in passing the Charlotte’s Web law this year. Morgan noted that Gaetz admitted to buying marijuana illegally to help a friend dying in a hospice. Morgan also said, “I don’t know how medical marijuana works; I just know it works,” and related how it helped his brother Tim. Morgan also noted how Big Pharma companies oppose Amendment 2 because they just want to sell narcotics like Oxycontin. He wrapped up his opening statement with a pastor-style church fervor: “I can’t be bought! I can’t be bought! I don’t know who’s paying your Vote No on 2 person over there (referring to Jessica Spencer), but I can’t be bought!”

During his arguments, Morgan referred to Cathy and Bob Jordan, who were in the audience. Cathy suffers from ALS and was in the news recently when her husband Bob got in legal trouble for growing pot to help ease Cathy’s symptoms. Morgan said he pushed for Amendment 2 to help people like the Jordans, as well as folks like a young woman in the audience who was severely disabled and suffered from epilepsy.

Polk County Sheriff Grady Judd, one of the biggest opponents of Amendment 2, opened his statements by noting that “John Morgan is a good man”, but questioned why the amendment was written with so many loopholes. Judd argued that doctors won’t tell you to smoke medicine because it’s not healthy to smoke anything. He also questioned ballot language that includes the term “other conditions”, which Judd argues is a loophole that will make for de facto legalization of marijuana. He argued that anything could qualify as “other conditions”, and said that a back ache for instance does not qualify as a debilitation condition (this prompted an audience member to yell out “Yes it is!”). Judd also expressed concern about civil and criminal liability as an unintended consequence of the proposed amendment. Saying “the devil is in the details,” Judd argued that voters should vote no on 2 because it is too imperfect and will be hard for his deputies to enforce.

Jessica Spencer, the director of the No on 2 movement, said “Good for you if marijuana is not a gateway drug for you, but I have seen many people affected by it.” She also said that NORML’s advocacy is a red herring, and noted that even NORML leader Dan Lynn recently acknowledged a link to marijuana use and schizophrenia. Spencer also argued that smoking marijuana is not the best delivery method, and expressed concern about how the new law could encourage legal pot use by teens. Pointing out that a “yes vote now is forever” because of a change to the state Constitution, Spencer said there are too many loopholes in the current ballot language because it is too liberal as now written. She encouraged Amendment 2 backers to work with her to change the ballot language before it’s too late, prompting big applause from the Vote No on 2 crowd.

Winter Haven Psychologist Jeffrey Reddout pointed out that he takes a scientific approach to the topic, but said he is neutral on the matter and said more research should be done. Reddout pointed out that that the American Medical Association says pot should be a schedule 3 drug, not schedule 1 (the most heavily regulated drugs, like heroin). Reddout also pointed to research proving that pot can damage the developing adolescent brain, and kids run the risk of losing IQ points during the teen years. He also acknowledged that marijuana can be helpful for neuropathic pain (like the type Irv Rosenfeld suffers from), and is helpful for wasting disease from AIDS. It is also very helpful to increase appetite in cancer patients. Nonetheless, Reddout said that marijuana should not be a first-line treatment for pain, but is a good alternative for narcotics if they are not effective.

Lakeland physician Dr. Sergio Seoane opposed Amendment 2, but acknowledged that more research needs to be done on marijuana, and that has been difficult because of the schedule 1 status. Nonetheless, Seoane pointed out several negative medical effects from marijuana, such as impaired cognitive function, which wears off after only a few hours, while motor skills are affected for nearly 24 hours. He also said the pot has more tar and carcinogens than tobacco, and also puts people at greater risk for bladder cancer. Seaone wrapped up by saying that pot can shrink your brain, which prompted mocking laughs and jeers from the audience. Later, Seaone acknowledged that Marinol (the legal synthetic form of marijuana sold by pharmaceutical companies) is an imperfect and ineffective drug in many ways, but said that more research must be done with marijuana before legalization can take place.

Irv Rosenfeld, a Miami-area stockbroker, is one of only 2 people in the U.S. who is legally allowed to use medical marijuana through a Federal compassionate care program that has since been discontinued. Rosenfeld brought his personal tin of marijuana to the forum and pointed out that he has been smoking 10 joints a day for several years, and estimates that he has smoked over 140,000 joints with no ill effects. He also pointed out that “without medical marijuana, I wouldn’t be here; I would be dead,” because pot is the only drug that effectively stops the pain and spasms from his debilitative bone disease. Rosenfeld challenged Grady Judd to a future debate (which Judd nodded and seemed to accept), and called out other Amendment 2 opponents like Mel and Betty Sembler and Calvina Fay to debate him too.

At the end of the forum, Jeffrey Reddout asked whether anyone’s mind had been changed by the panelists’ arguments, and no one in the audience raised their hands. However, this blogger and many others came away better educated on the issue. I look forward to upcoming debates, and I am curious about whether the initiative gets the required 60% threshold to pass.