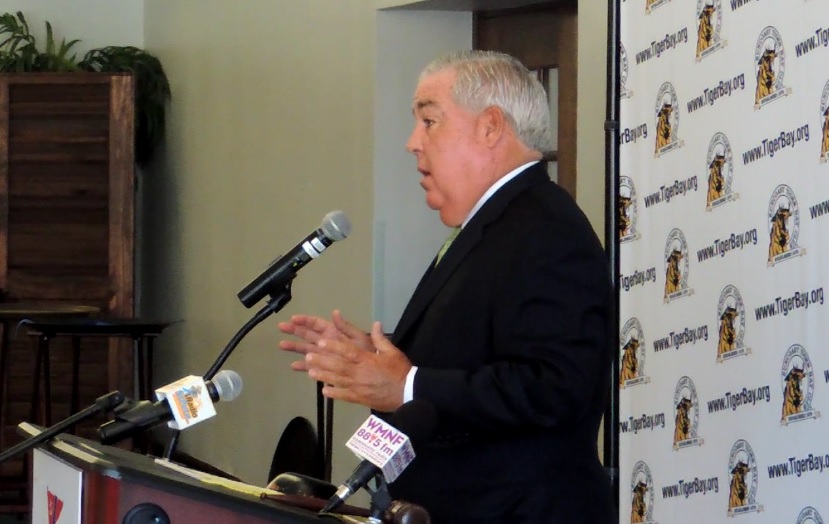 Attorney John Morgan says he still has not decided if he’s going to run for Florida governor next year — he told the Suncoast Tiger Bay Club in St. Petersburg Wednesday that it depends on if he thinks he will win; Morgan also blamed the deaths of 11 residents in a south Florida nursing home after Hurricane Irma on conservative efforts to restrict lawsuits, a process known as tort reform.

“The hurricane came and hit and we learned a lot about it.

“We learned what a monopoly looks like, if you had power out.

We understood what tort reform looked like, if you were trapped in a nursing home in Hollywood, Florida. You see, the law in Florida is if you’re in the nursing home, all you can get is $250,000 for pain and suffering. So, we got to see what tort reform looked like up close and personal. What it looks like is we warehouse people and we put them away and big corporations make a lot of money and we can do to them whatever they want. We can even cook ’em alive.

“Our dogs, when they go to the kennel, have cameras on the dogs — and by the way Emma and Molly say ‘Hello’ — and they refuse to go to the kennel. But, if they did go to the kennel, there would be a camera watching their every move. Our mothers and our grandmothers and our best friends are warehoused in these nursing homes and sometimes, like last month, cooked alive. That’s tort reform. That’s what it looks like in real life.

“So, as I’ve been thinking about this whole prospect of running or not running, let me tell you first and foremost for Adam [Smith of the Tampa Bay Times, who was in the audience], that I am dead serious about doing this.”

Morgan says if he runs and becomes governor his priorities will be raising the minimum wage and restoring civil rights to nonviolent ex-felons.

Morgan says he thinks he would give the Democrats a “fighting chance” at winning back the governor’s mansion.

“Well, I think the reason Hillary Clinton lost the election was because she ran not to lose instead of running to win. She was at my house two times, I know them real well. You all never got to know her. She’s funny. She’s bright. She’s clever. America never got to see that.

“With me, I am a fighter. I am an unvarnished, charming, bro [laughter] and what you see is what you get; for better or for worse. Some people say to me, ‘You know, if Trump can do it, you can do it.’ I don’t take that as a compliment. [applause] All I say is this, ‘I say what I think. I don’t think like Trump. But, I say what I think.’ And I think what I would give the Democratic Party is a fighting chance, ‘cuz I’m a fighter and that’s all I’ve done my entire life.

“I fought our way out of poverty. I fought our way out of desperation. I built gigantic companies and I’ve won and I hate to lose. So, that’s what I think would be the difference between me and a lot of politicians. And by the way, I know ’em all and I like ’em all, a lot. Gwen Graham; I call her ‘little sister’ at Morgan and Morgan. Jack Latvala; you know, I need him in the race. I need somebody heavier than me in this race. [laughter] I mean, I can’t be the ‘fat guy’, right? So, I like ’em all. I like Phil Levine, my Lieutenant Governor candidate (this was a tongue-in-cheek reference to something he said earlier). But, I’m just a little bit different than them in a lot of respects.”