Home Blog Blog Keep Off This Street: The Epidemics of Polio and COVID19 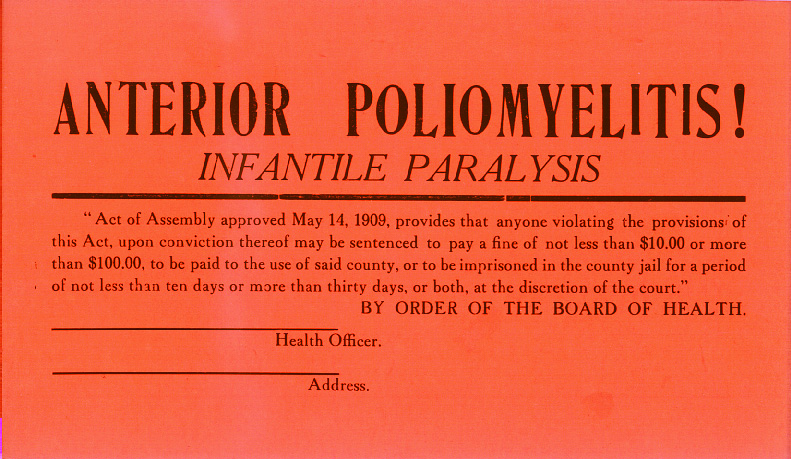 The epidemics of polio and COVID19

Empty beaches, hollow pools, abandoned and quiet streets. Bans on gatherings. Fear layering daily activities with hesitation, and loss. While the Spanish Flu of 1918 is evoked by the onset of the latest coronavirus, another epidemic lingers in memory.

Polio ravaged children and adults in the first half of the 20th century, appearing in the summer after school let out. The very places of pleasure – movie houses, public pools, the warm white sand of the Gulf, seemed ominous. At its peak, polio affected 37 out of every 100,000 people. about 38,000 each year. What can we learn by looking at the similarities and differences of polio and COVID19?

Epidemics transmit in different ways. Some require intimate contact, such as Ebola. Intimacy and/or intimate fomites (objects or material carrying the disease), such as HIV/AIDS spreads viruses. Many transmit through the air (through droplets or aerosol, or both), such as the Spanish Flu. There is no definitive proof yet that people can get COVID19 infections through only droplets or only oral spray. Health officials recommend protecting yourself in multiple ways.

Today’s unbalancing uncertainty about the virus and its transmission also happened with polio. It started in the late 19th century and blossomed fully by the mid-20th. There were several epidemics and pandemics in the 19th century – cholera, typhus, smallpox, yellow fever, and the plague.

International trade introduced international diseases into cities and ports. Poverty and overcrowding there accelerated both the spread of epidemics and anger at governments’ failure to curb the impact.

The Western world shifted from primarily agrarian to more urban with the industrial revolution in the 18th and 19th centuries. Understanding about how diseases spread, and could be treated, challenged traditional medical practices. Science hadn’t caught up with new societal norms. Quarantining entire populations during epidemics, and mistrust of the medical establishment, resulted in protests and riots in Russia, Germany, and England.

Protests? Looks like we have reached that stage in the pandemic playbook right now. There were worker strikes and riots during the Spanish Flu as well, against autocratic or ineffective governments. There weren’t polio riots though. 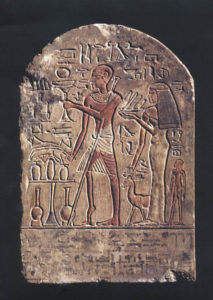 Poliomyelitis and civilization developed together. An ancient Egyptian stele depicts a possible polio victim, dating from around 1400 CBE.

Polio didn’t reach epidemic proportions though until the modern age. Infants might contract polio in its mildest form, and develop immunity, or get the immunity as they nursed from a mother who had it. But as sewer systems were cleaned up and public health measures were taken to battle other diseases, widespread immunity against polio declined. Immunity to the disease, then called Infantile Paralysis, no longer was transmitted through mothers’ milk or developed early.

Children, instead of infants, began to get polio, with more severe symptoms and greater risk of paralysis.

The entire planet reels from the COVID19 pandemic. Governments shut down most businesses and public areas. People are told to stay home, while scientists and medical teams try to figure out how it is transmitted; how long the virus can survive on surfaces; and whether immunity develops in those who have had it. Does immunity develop if you’ve had it?

The president suggests dangerous or ineffective treatments, and the internet picks those ideas up and a misinformation pandemic spreads as well – another similarity between polio and COVID19.

There were some dangerous treatments for polio. Texas sprayed its towns with DDT.

People believed that warm water could cure polio, yet also believed that it could be caught in pools, lakes, and other bodies of water. What was clear was that polio was a highly contagious disease. Quarantines, aka shelter at home and social distancing, were invoked when the disease would show up, usually in the summer. 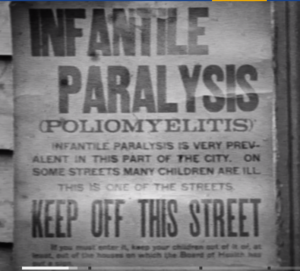 Katherine Meacham Conover remembers pools being closed in 1930s Memphis, when she was a child. Doors were marked when there was a house with a polio victim. Later, a college friend and her three children developed polio. The kids were okay, but her friend was permanently afflicted. The government installed a pool in her back yard to help her rehabilitation, and she had a car that she could drive with just her hands. And yes, Memphis also sprayed DDT.

Musician Gary Z, who contracted a mild case of polio when he was young, still remembers a visit to the hospital 66 years later.

“I was quite fortunate as other kids in my hometown (PA) were not so lucky. In 1954 my mother took me to the local hospital to visit a classmate (first-grade) who had been stricken and was in an iron lung. The visit with him has always stuck in my mind. To this day I clearly remember talking to Michael as he lay there. He was somehow cheerful and happy we had come to visit. I never saw him again. Quite sad but a slice of Americana. Happy days followed as the Salk vaccine was developed a year or so later.” 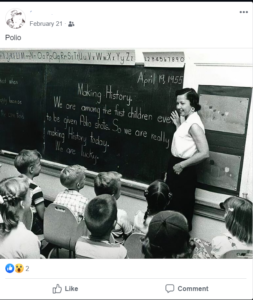 But here is a better memory. In 1953, a small scale polio vaccine trial happened at the elementary schools near Carnegie Institute of Technology, now called Carnegie Mellon. Dr. Jonas Salk has a small team working on a vaccine, and needed 700 students for a trial. The Meachams were a faculty family at Carnegie. Their eldest son Robert attended Squirrel Hill Elementary School near the campus.

“Of course we wanted to be part of the trial,” Mrs. Meacham Conover said. “Children were either given the real vaccine or a (placebo). They told us later that Robert had gotten the real thing.”

The success of that small trial led to bigger ones. In April 1955, the vaccine was pronounced safe and effective, and ready for wide distribution. Polio was largely erased from the United States over the following decade.

Most Americans strongly support social distancing and other measures to prevent the spread of COVID19 (8 in 10, according to a recent poll by Politico/Morning Consult), though there are some well funded but small protests against the restrictions. Were people as amenable during the height of polio? Gary Z. thinks that the post-war mentality in the 1940s and 1950s contributed to a ‘lax’ mentality.

From the top down

The national context of polio in the United States during the first part of the 20th century was largely shaped by President Franklin Roosevelt. He contracted what was thought to be polio in 1921, when he was 39, which both paralyzed him, and led to his strong activism. It also shocked the nation that a rich, connected, well known politician could get polio. Roosevelt started the Warm Springs Foundation in 1927, designed to help people with polio not only improve, but be independent and high functioning in a society that often shunned and limited them.

Elected to the White House in a landslide in 1932, Roosevelt held Birthday Balls to raise money for polio research and to help provide treatment. In 1938 he transformed the Warm Springs Foundation into the National Foundation for Infantile Paralysis. It was later rebranded as the March of Dimes by popular comedian Eddie Cantor. The idea was that even during the Great Depression, everyone could afford to give a dime to fight polio. Millions of dollars were raised and grassroot fundraising was born.

It might be hard to believe that good can come out of the COVID19 pandemic right now. Tens of thousands of lives lost, and millions of lives changed. An economy that now tilted, can crash. Months of education, work, projects, and plans have slipped away. But earlier pandemics and epidemics led to positive change. Maybe this one will too.

Less known is Polio’s profound effect on modern life. Physical therapy and rehabilitation, disability rights and universal design/access for all in public spaces were all either profoundly changed or invented in response to polio. The Warm Springs Foundation rejected the idea that the effects of polio should keep people from working, having families, and living. They were early prototypes for accessibility. The March of Dimes changed non-profit marketing, especially by using celebrities, and grassroots fundraising.

What amazing things might come out of the COVID19 pandemic? Voting by mail, human impact on the environment, the health care system, transportation, and many other things are up for discussion.

There could be a silver lining to these terrible dark clouds.