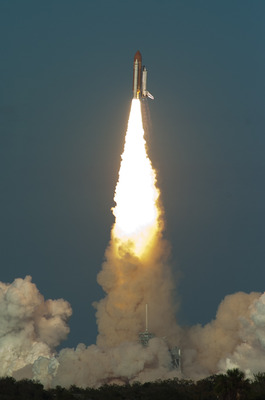 Climate scientists say that sea levels will continue to rise because of melting polar ice and because warmer oceans will expand as the planet warms.

WMNF spoke with Kim Toufectis, the architect who coordinates master planning for NASA’s 15 locations, including KSC.

“Adapting to climate risks is part of what NASA needs to do in order to make sure our facilities can support our work going forward. Just because the Kennedy Space Center has such an important role in that, we began having a series of local workshops to bring together experts to think about how we can appropriately adapt to a changing climate and in particular, to the risks that can come about from rising sea levels. The workshop lasts about two-and-a-half to three days and involves some assessing of where the center is, where the community is, and what its risks are. It then explores where the vulnerable places in the center and the community are.

“As you may know, the Kennedy Space Center is awfully close to sea level, and so we want to make thoughtful choices to make sure we protect our activities there. We’ve been doing that since about 2008. We’ve had some overwash of the dunes along the coast right in front of some of our most significant launch facilities.

“The KSC is largely between 2 and 3 meters, which is roughly 6 to 10 feet, above sea level. So it’s significantly within the 5-meter range that we consider to be an area of concern. We’re not particularly worried about sea level rising many meters, although the possibility exists for a significant rise. But we’re more worried about the combination of gradual sea level rise, together with severe storms that could interrupt our ability to operate at the Kennedy Space Center.”

So why are these facilities located mostly on the coast for those who may not know?

“Much of the choices about where to put the space program are based on the logistics of accessing space. As many will know, ever since the Apollo era, we have been flying heavier and heavier vehicles and many of the components of those vehicles are barged to the Kennedy Space Center. In many cases, we build and test them along the Gulf Coast and bring them to Kennedy for launching.

“There are individual actions we take where we preserve the relatively high ground on Merritt Island where the Kennedy Space Center is centered, so that we have opportunities to consolidate and retreat within our centers.”

And how could you pass that information on to risk areas such as Miami, New Orleans or even St. Petersburg?

“Well, that’s a great question. Within our centers, we have focused on the immediate community and invited industry and government officials from local county governments and the State of Florida to participate in our workshops.”

And the Kennedy Space Center was the first center to be part of one of these workshops?

“Yes, we chose the Kennedy Space Center not only because it’s big and because it conducts important and near unique portions of NASA’s mission, but also because sea level rise is such an evident issue that we felt it was an important opportunity to get started in thinking about the entire agency and our responsibilities to adapt. Starting again somewhere else, really, is not a practical option.”