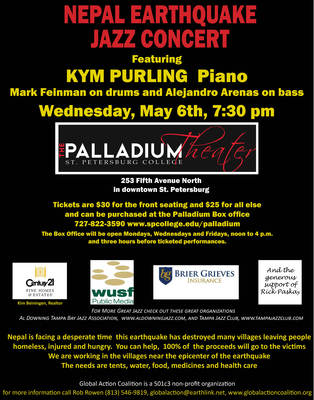 We talk with Rob Rowan, whose charity organization Global Action Coalition will be holding an earthquake relief concert for Nepal. The south asian country was hit by a devastating earthquake last week that killed over 6000 people, including 19 climbers on Mount Everest. The Nepalese government is appealing for international aid in face of a shortage of tents and food for many people that have been left homeless. The jazz concert will take place at the Palladium Theater in St.Pete on May 6 at 7:30 pm.

We also listen to a heated interview from The Daily Show with Jon Stewart with former New York Times journalist Judith Miller, whose reports on Weapons of Mass destruction during the Iraq War have since been found to be inaccurate.