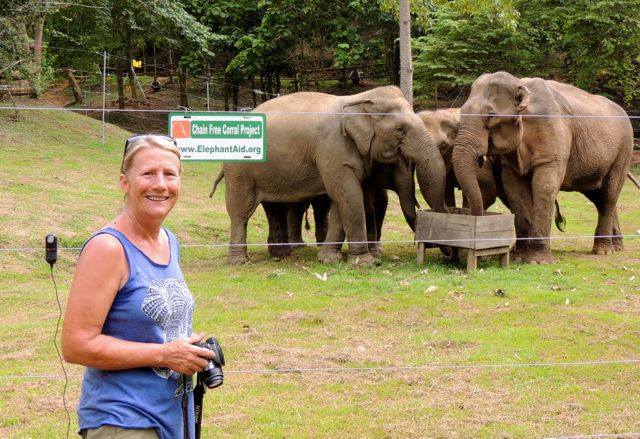 Carol Buckley—a longtime expert in the care of captive elephants, who co-founded The Elephant Sanctuary in Tennessee, moving on to found Elephant Aid International, a nonprofit organization “that creates innovative approaches to the care and management of captive elephants”—sought to address in a Talking Animals interview, 47 years in to working with these animals, what exactly it is about elephants that stole her heart, and keeps stealing it.

Some of that profound connection she attributes to something akin to divine intervention, like when she was enrolled in an exotic animal training course, at 19, and while doing her homework one day in her rental house, a baby elephant walked by.

There’s a lot more to this story—indeed, that elephant is Tarra, a key figure in a lifelong Buckley saga, with no shortage of twists and turns and cliffhangers, like: when a lengthy custody dispute between Buckley and the Elephant Sanctuary leadership over Tarra’s status (she’d been at the Sanctuary since Buckley co-founded it in 1995, and has remained there after Buckley was ousted by the board of directors in 2010) was recently decided in Buckley’s favor after many years.

She makes clear in this conversation that she plans to relocate Tarra to Elephant Refuge North America, Buckley’s 850-acre sanctuary located in Attapulgus, Georgia (not far from Tallahassee), which recently welcomed its first elephant resident: Bo, a retired circus performer, who had been a star attraction for the better part of three decades at the Carden Circus.

While on the topic of circuses, Buckley offered the surprising contention that zoo elephants tend to experience more difficult, emotionally damaging lives than circus elephants do. We touched on other topics, including the considerable time she has spent in Asia in recent years, mostly under the Elephant Aid International umbrella, undertaking such projects as creating chain-free night corrals for elephants in Nepal.